For decades the plastics industry has pushed the responsibility of our waste crisis from producers to consumers. Industry-funded organizations like Keep America Beautiful want us to believe that careless, littering individuals are responsible for the plastic pollution crisis, not the petrochemical juggernauts tearing up the planet to wrap the world in cellophane. As alarm continues to grow, so has the industry’s appetite to put on a happy face and peddle solutions. Not surprisingly, these gestures have less to do with solving the waste crisis than they do with entrenching the status quo in an attempt to squeeze more “value” out of harmful products that pollute at every point in their life (read: death) cycle. With global plastic production expected to triple by 2050, the industry knows it needs to address its waste problem.

You may have heard these phrases over the last couple years and you’d be forgiven for wanting to believe in them. As they’ve been doing since the 1970s, big plastic is spinning us another silver bullet. This time under the guise of what is being branded as “advanced recycling,”  an umbrella term used to greenwash old incineration technologies, namely pyrolysis and gasification.

Much of what the industry refers to as “advanced recycling” is actually plastic-to-fuel operations. Facilities that heat mixed plastic waste in order to create low-quality diesel fuels or synthetic gas (syngas) which is typically burned onsite or else shipped off to be blended with cleaner commercial fuels and burned elsewhere. Uncontrolled pollution from these processes pose significant health and safety risks for local populations, placing a heavy toxic burden on workers and surrounding communities, the majority of which are low-income and communities of color. 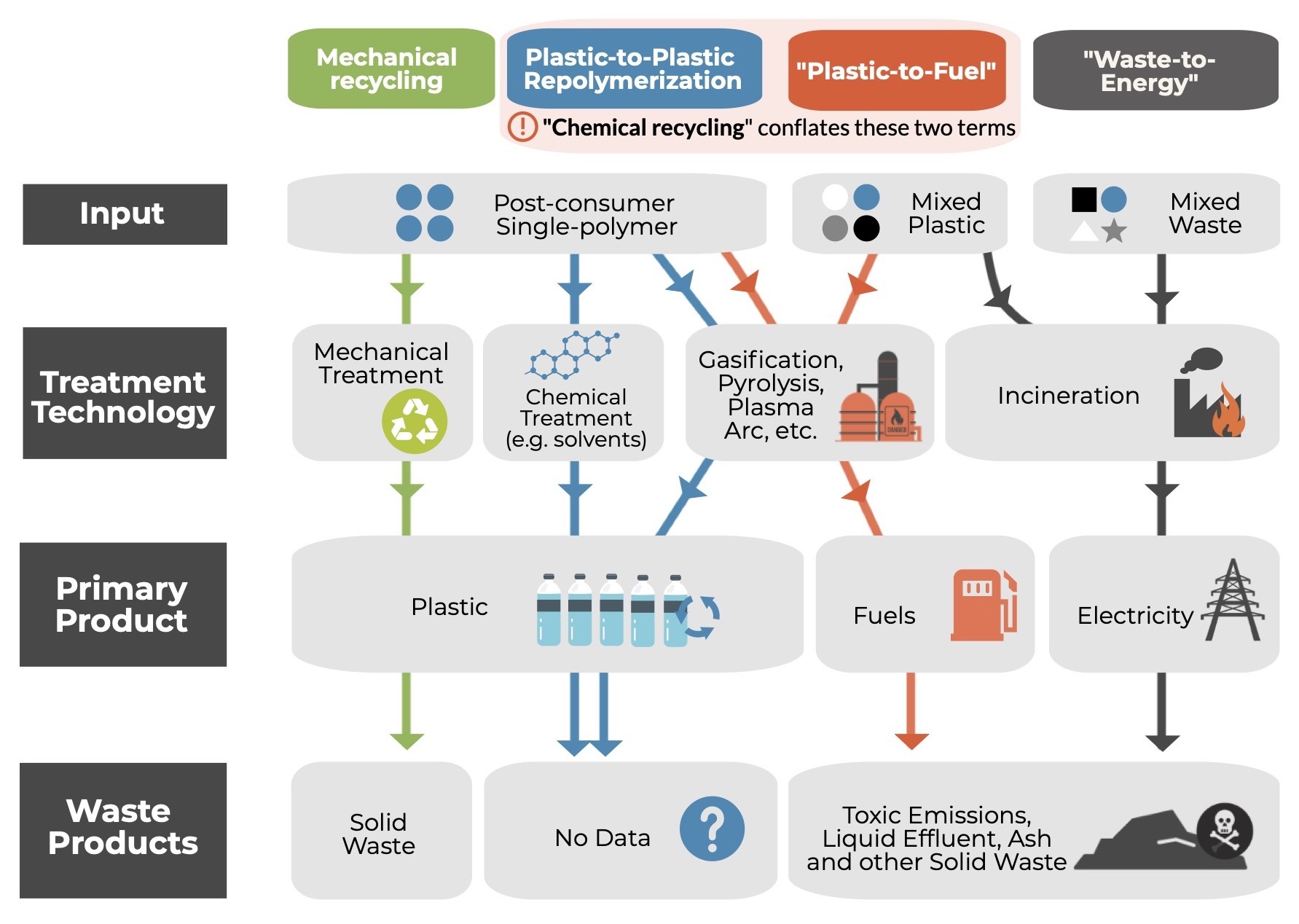 Graphic courtesy of the Global Alliance for Incinerator Alternatives (GAIA)

Roughly 40 plastic-to-fuel facilities have come online in the U.S. over the last 20 years, most of them shuttered by insurmountable technical failures and the exorbitant cost of sourcing, transporting, and purifying inherently contaminated feedstocks of mixed plastic waste. Of the plants supposedly still in operation, none of them are creating new plastic. In 2018, a polystyrene pyrolysis plant in Oregon that purports to create virgin-like styrene and is widely touted as the paragon “advanced recycling”, sent nearly 500,000 lbs of hazardous waste to be burned in cement kilns across the country, filling the air in communities like Tacoma, Wash. and Hannibal, Mo. with benzene and vinyl chloride.

And the fight isn't only at the federal level. The American Chemistry Council is angling to embed advanced plastic burning in a number of Extended Producer Responsibility (EPR) laws in state legislatures across the country. They continue to push legislation that reclassifies pyrolysis and gasification as manufacturing processes rather than solid waste disposal, effectively exempting operations from stringent air emissions regulations. As of this writing there are 18 states that have passed such laws, with 9 more on the horizon. And locally, site fights are popping up as fast as facilities are announced. Fierce grassroots orgs like Brown Faces Green Spaces and Environment Georgia are on the ground pushing back against these industy boondoggles while advocates at GAIA, Earthjustice, and California Communities Against Toxics continue to pressure the EPA.

When discussing these technologies, we need to stop using industry lexicon and instead call out these fanciful innovations for what they are: incineration technologies hidden within an industry shell game that has nothing to do with recycling and will only incentivize petrochemical expansion and the creation of more plastic waste.

There is mounting evidence to suggest that humans are the ultimate repositories of plastic waste. In our throwaway society, we have become away. Whether through traditional incineration or nouveau ploys to combust plastic waste, false solutions like so-called advanced recycling will only move our landfills into our air. And while there is no silver bullet to our waste crisis, the best way to stop the flow of plastic pollution is to turn off the tap. Policymakers must advance progressive measures to hold producers responsible for the products they create while supporting community-based zero waste initiatives that center prevention, reduction and reuse.

Surfrider has been advocating for source reduction for over a decade and our chapters have successfully led myriad plastic bans across the country. With the recent global mandate to establish a legally binding treaty that addresses the full lifecycle of plastic, the U.S. has a moral responsibility as the world’s largest producer and exporter of plastic waste to present bold upstream solutions. The Break Free From Plastic Pollution Act is a great place to start. 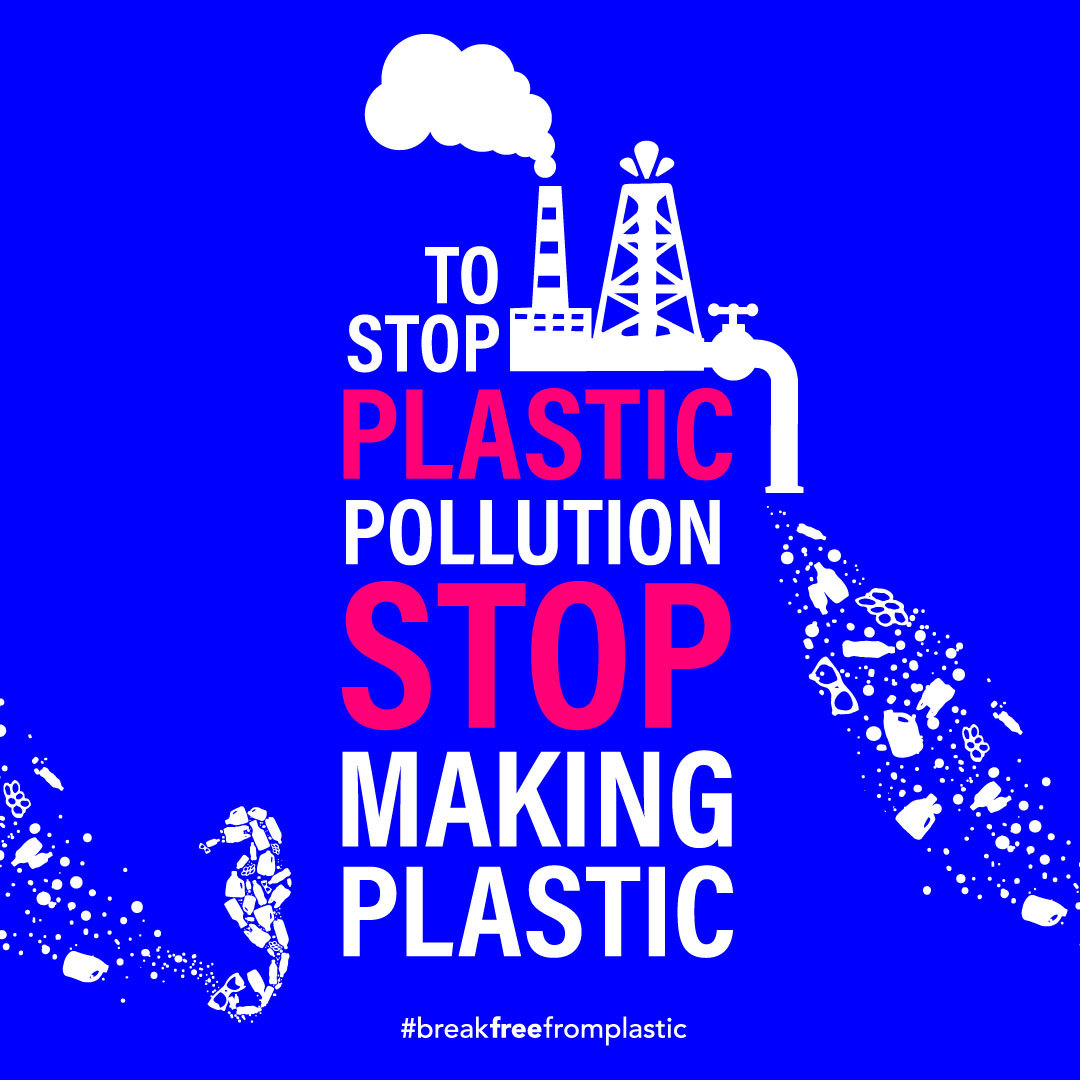