There is something powerful happening in the LA surf scene, driven not by pros or industry scions, but by scores of young and tenacious surfers of color who are forcing the sport and its disciples to reckon with its all too familiar culture of aggression, exclusion, toxic masculinity and unabashed racism.

Last Sunday, in response to a disgusting incident that took place in a South Bay lineup, LA surfers Brick! and Gage Crismond teamed up with Surfrider Ambassador Selema Masekela, Earth Tech founder Ryan Harris, Danielle Black Lyons of Textured Waves, and the folks at Color The Water to host the Black Sand Peace Paddle at the Manhattan Beach Pier.

Masked up and respectful of distancing, over 100 surfers gathered on the beach in solidarity to make it known that racist aggression has absolutely no place in our lineups or in our communities. 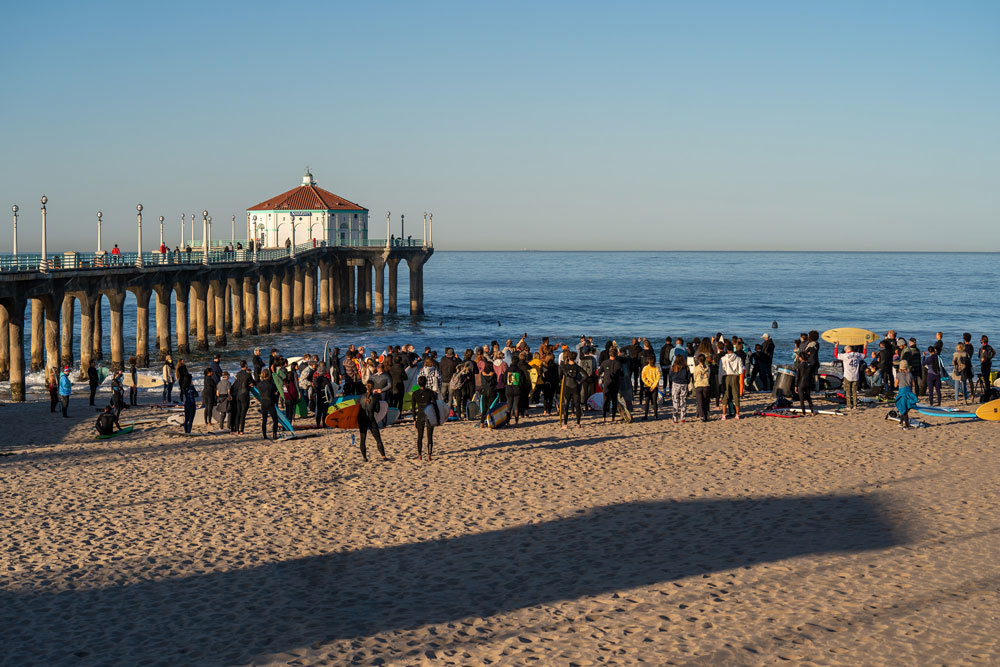 “What happened here on the north side of the pier was beyond unacceptable and everybody has to feel a sense of responsibility about what occurred,” Brick! told the crowd. “We gotta get the vibe right out here.”

Surfing is rife with so-called localism. Pervasive, exclusionary and territorial vibes that can range from microaggressive to downright violent. Each break carries its own energy and flock of regulars, but all so-called localism seems to fester from the same place: a false sense of ownership: My block, my beach, my waves. Not from here? Get out. I’ve never had rocks thrown at me or my tires slashed or had a fist come anywhere near my face, but I have friends who have. I’ve endured nasty looks and puffed-up bluffs from adrenalized bros who honestly seem like some of the most miserable human beings on the planet: terminally angry, offended to the bone and just plain radioactive. Astonishing given the nature of riding waves where we find ourselves lucky enough to spend hour upon hour in the ocean, absorbing all the stillness and energy it ushers our way, teaching us to be present and focused and committed to the drop where we might once again enter the flow, transcend the spacetime continuum and arrive in a state of perpetual bliss! 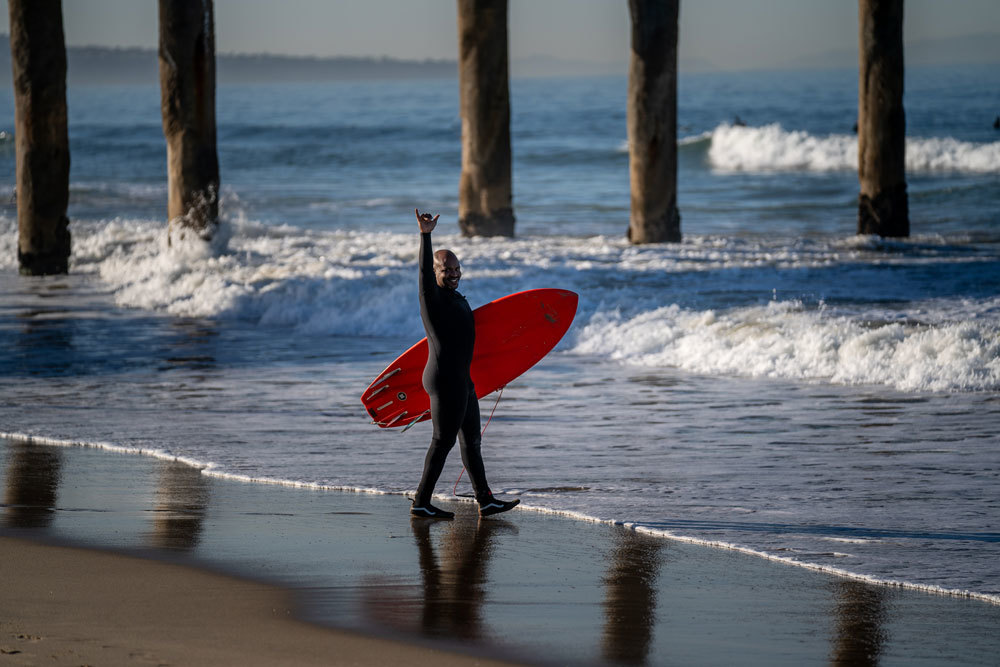 For years, I’ve done my best to ignore the kind of toxic energy that can pollute the lineup from time to time, break to break. But as a white cisgender male, it’s likely easier for me to avoid than it is for others, and it’s evident that such behavior is part of a long accepted paradigm, one that will continue unless it is confronted and dismantled by people like me and those that joined together last weekend. The surf community at large can no longer passively accept or allow the kind of behavior that has recently taken place in the South Bay. And like so many other movements for change, the one currently shaping up in the LA surf scene is being led by the Black community.

As surfers who wish to live in solidarity, we must actively visualize how we would respond if we were to witness racist aggression in the water, or anywhere for that matter. We must be prepared to intervene. “Being not racist is not enough,” Brick! reminded the crowd. “Being anti-racist is what we need.”

“Doing nothing is more of a problem and more aggressive than the words actually being hurled at us, and that’s what we are here to really appreciate,” Selema said. “Skin in the game means what are you willing to do that’s going to make you uncomfortable?” 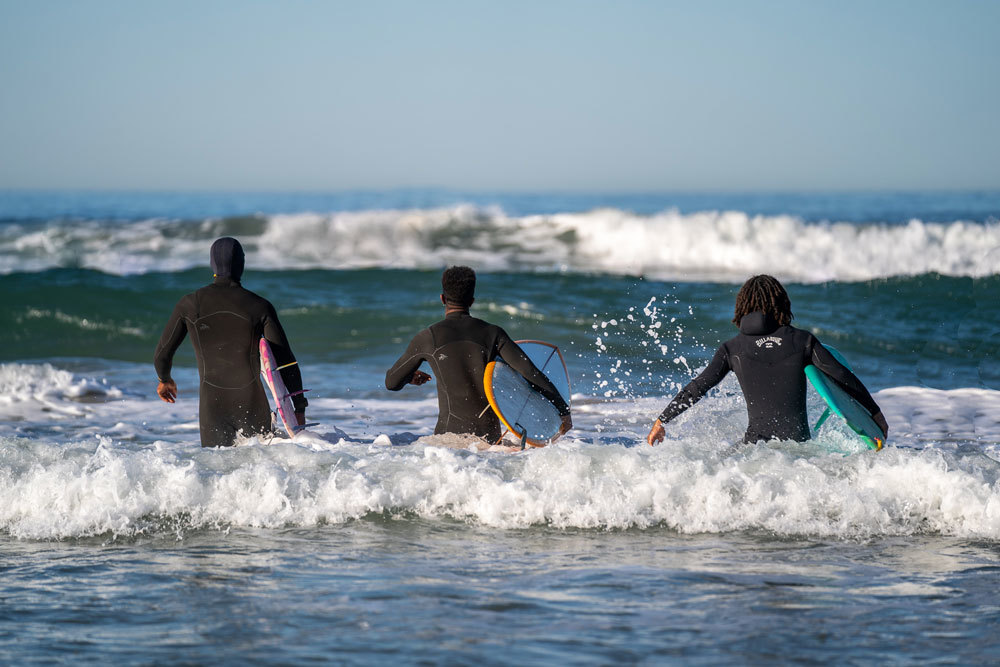 It is a question we must all be willing to ask ourselves. The kind of confrontation that Brick! and Gage experienced in the water is not their problem to solve, it’s ours. As a community of ocean-loving people who understand that the beach belongs to everyone, it is our responsibility to make sure that underrepresented folks feel welcome to safely and freely enjoy the ocean, waves and beaches we all hold dear. Acts of solidarity can be as simple as a friendly ‘Hello’ to a new face in the lineup, or as challenging as confronting an aggressor and demonstrating to our sisters and brothers that we have their back, in real time. As Ryan Harris intoned on Sunday, “If you see something, say something.” Silence only makes people complicit.

If it sounds like a tall order, that’s because it is. But it’s the only way we’re going to begin to break barriers and remediate the kind of toxic masculinity and racism that has been poisoning our sport for generations. Surfing’s roots are Indigenous. A native pastime that was gifted to the world when Duke Kahanamoku embarked on an international tour in the early 1900s to share with the west the art of riding waves. It is precisely this kind of vision and generosity that groups like Black Sand Surf, Color The Water and 1 Planet One People are working to seed in surf culture. A truer, more inclusive localism, one centered in respect, community, justice and joy. A localism rooted in the idea that the ocean, waves and beaches we all love are not personal property or resources to be hoarded, but rather living relations to which we belong, bodies and beings we are blessed to enjoy and safeguard for future generations. 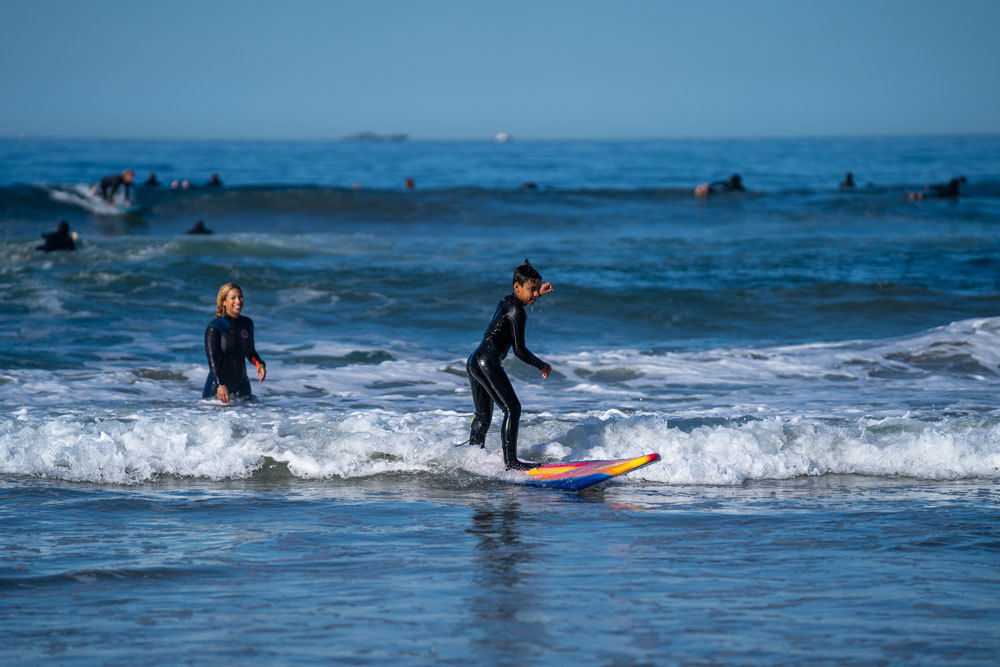 It’s hard to overstate how exciting this moment-that-feels-like-a-movement is, something that surf culture and our Mother Ocean desperately need. The Black Sand Peace Paddle was the most diverse, enthusiastic and moving gathering of surfers and ocean-lovers I have ever witnessed in my 20 years of wave riding. Black, White, Latinx, Indigenous and Asian folks. Sisters and brothers and gender non-conforming Queer folks in the mix, right alongside the differently abled. All of us suited up, standing proud and hollering for the vision. The vibe was inspired, communal, youthful, rapturous. What surfing should always be. An intentional and shared celebration of the gift of riding waves together on this miracle planet.

“We want to reset the tone. It’s about respect. We’re all out here chasing that same feeling,” Brick! said. “No matter if you’re a pro or just starting out, you’re still on that journey. And that’s what it’s about. Respect for everybody’s journey, respect for the water. Love and peace. That’s it.” 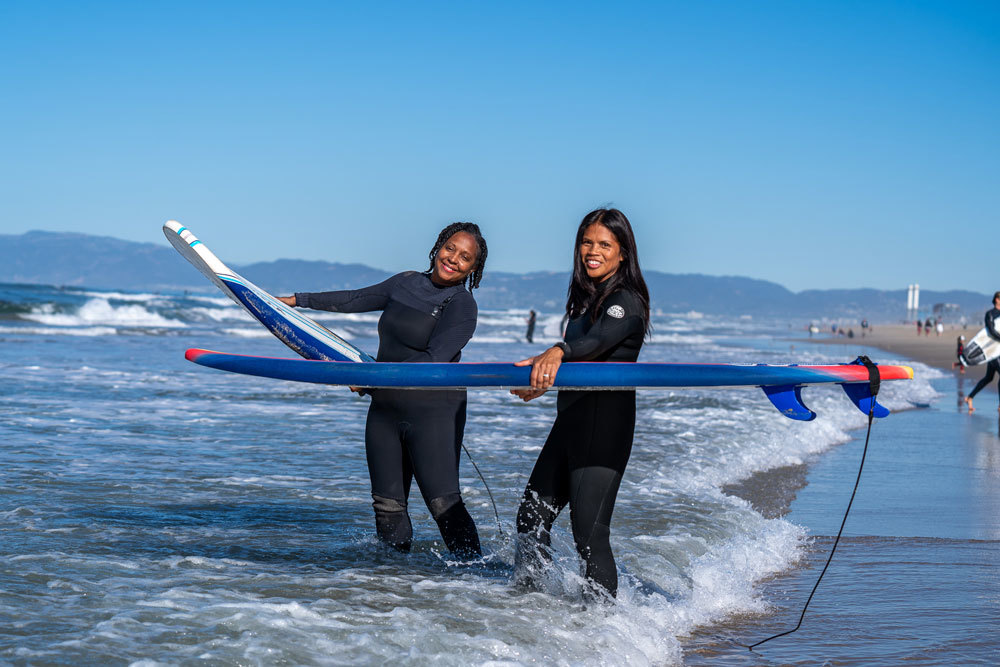