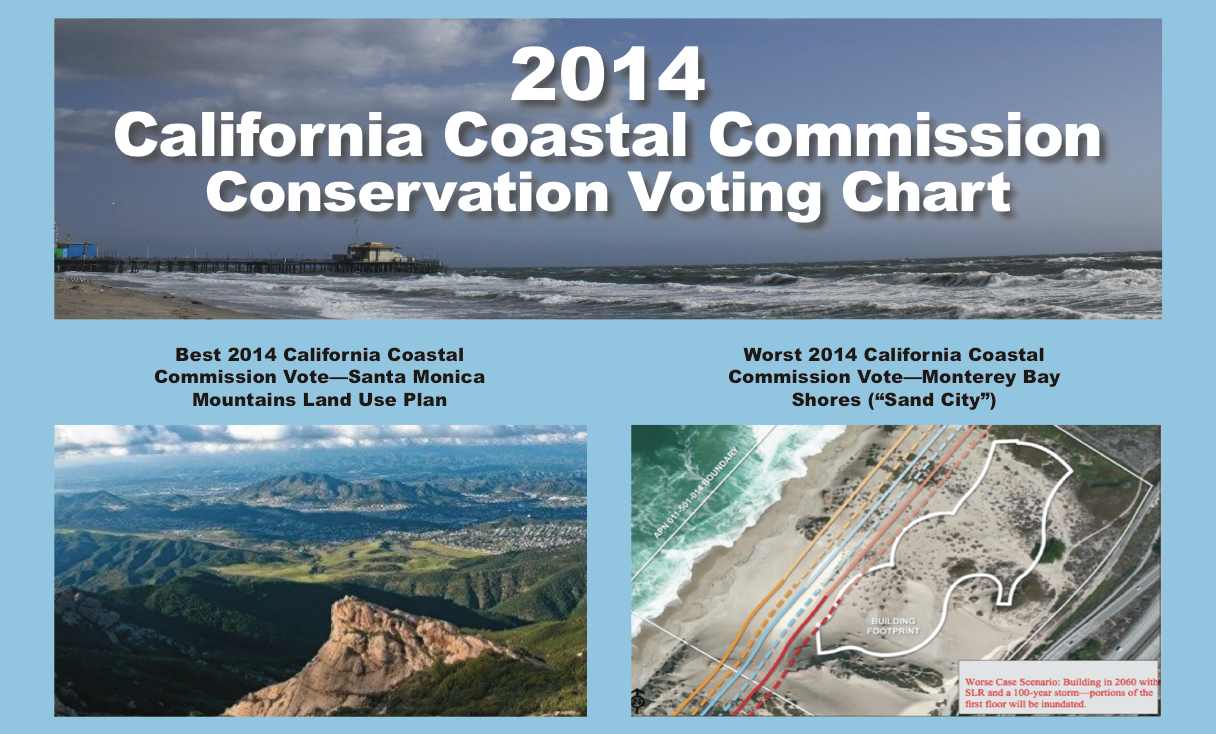 The Surfrider Foun­dation, WiLDCOAST/COSTASALVAjE and Environment California, in cooperation with ActCoastal and California’s conservation community, released the 2014 California Coastal Commission Conservation Vote Chart.The Vote Chart monitors the annual performance of the Coastal Commission, the state’s most powerful land use agency, by tracking conservation votes cast by individual commissioners. Votes were selected for review based on their anticipated impacts to coastal resources and their potential to set statewide precedent.

Among the six “public” commissioners, Mary Shallenberger had the highest score (94%), while Mark Vargas had the lowest (53%). Among the six “local government” commissioners, former City Councilperson, Brian Brennan scored the highest (100%), while Supervisor Martha McClure scored the lowest (59%). It should be noted that Brennan only cast two votes before leaving the Commission because he was no longer an elected official and could not continue to serve in a local elected seat.

“These votes determine the future of our coast. As issues like sea level rise and loss of beach access continue to grow in importance, it is imperative the entire Commission focus more rigorously on long-term protection of coastal resources and public access. It is of concern that the Governor’s and As­sembly Speaker’s appointments produced below average scores, and we truly hope they improve this trend in future years,” said Stefanie Sekich-Quinn of Surfrider Foundation.

“The California Coastal Commission is charged with protecting the California coast to ensure everyone can access and enjoy it. We were pleased the Commission voted to preserve low cost accommodations and housing during 2014.  It is important the Commission votes on behalf of all communities that reflect California diverse make-up, and who might be presently under-represented,” said Zach Plopper of WiLDCOAST/COSTASALVAjE.

“Considering the Commission is mandated to protect 1,100 miles of coastline, we hope to see improved voting and better appointments in the future to ensure our precious coastline is preserved for generations to come.  California has a worldwide reputation for progressive and sustainable coastal planning and it’s fundamental the Commission maintain this important standing,” concluded Dan Jacobson of Environment California.

The ActCoastal Coalition publishes a monthly vote chart and provides a record of past years’ charts here.

The Surfrider Foundation is a non-profit grassroots organization dedicated to the protection and enjoyment of our world’s oceans, waves and beaches through a powerful activist network. Founded in 1984 by a handful of visionary surfers in Malibu, California, the Surfrider Foundation now maintains over 250,000 supporters, activists and members worldwide.

WiLDCOAST/COSTASALVAjE is an international conservation team that conserves coastal and marine ecosystems and wildlife.