The West Coast rang in the New Year with unprecedented amounts of rain, but California in particular, is being walloped by a bomb cyclone that has washed away roads, damaged homes and crushed important coastal infrastructure. Surfrider extends our deepest thoughts to businesses, homes, and people that were impacted by this bomb cyclone. About 90% of Californians are also under ‘a severe flood watch.’ This bomb cyclone is part of the “atmospheric river” system that is plaguing California.

Atmospheric rivers have become more intense as our climate changes. As the Earth’s atmosphere heats up, it holds more rain, thus ushering in extreme weather. In fact, climate scientists compare the winds and rain associated with California’s storm to hurricanes on the East Coast—and predict the West Coast will see more dramatic storms if climate change is not curbed. A recent study found atmospheric rivers caused 80% of flood damage on the West Coast of the U.S. with an estimated cost of $1.1 billion annually. The lead author of the study stated, “Whatever we do, we will see an increase in intensity and damage from atmospheric rivers in the future. But if we limit greenhouse gas emissions, we should be able to improve future outcomes.”

These extreme rain storms are accompanied by turbulent seas that are inundating our coastal communities. Images from along the California coast are startling— between extreme rains and storm surge, it is clear that many communities will be conducting massive cleanups. While the conditions of the aftermath are daunting, Surfrider is continuing to work with local communities to proactively respond to climate change impacts and sea level rise. In 25 different localities across the country, we are working directly with decision-makers and communities to get ahead of climate change impacts on our coasts by updating land use plans to make smarter decisions on our coasts and implementing nature-based solutions like protecting and restoring blue carbon ecosystems. 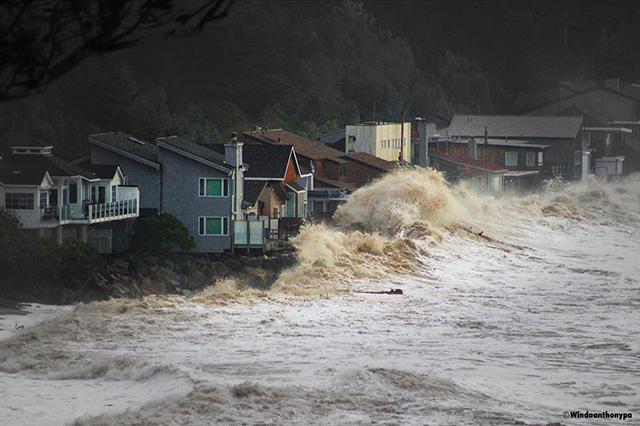 In fact, in 2023, Surfrider has set a high goal of increasing our work on nature-based solutions, such as dune restoration and 'living shorelines' across the country—which help to buttress our communities from extreme weather and sea level rise. In addition, we will significantly increase our work on protecting and restoring blue carbon ecosystems like seagrass, marshes and mangroves. Not only do blue carbon ecosystems absorb four times the amount of carbon as trees on land, they also provide an extra layer of defense against storm surge and rising seas. Surfrider is here to help our communities respond and adapt to climate change through better coastal management and nature-based solutions. Learn more about Surfrider’s nature-based solutions work.

Nature-Based Solutions: A Frontline Defense Against Climate Change from Surfrider Foundation on Vimeo.