Canine Scent Detection of human sewage in streams on Kauai

The water quality methods employed by Surfrider’s Blue Water Task Force program measure levels of bacteria found in fecal matter (thus providing a proxy to human health risk) but are not able to differentiate between human and animal sources of fecal pollution.  Genetic methods are available that can provide more specific information on sources of pollution but they are very expensive, require a high level of scientific training and access to specialized lab equipment, and take weeks for results to be available.

Our friends at Clean Ocean Action in New Jersey, recommended a cheaper and faster option that they have successfully used to find multiple failures in the stormwater and sewer infrastructure in the Navesink River Watershed – Sewage Sniffing Dogs.  In fact, Environmental Canine Services have been utilized in over 70 sewage detection investigation projects in fourteen different states since the company began in 2009.  This short video does a great job of explaining how a local agency (Santa Barbara) can use sewage sniffing dog services to locate and solve water pollution problems that are threatening public health at the beach and causing beach closures.

The Kauai Chapter, who has long been measuring extremely high levels of enterococcus bacteria in many streams that discharge onto the beach on their island, have just tried out Environmental Canine's ‘Sniff and Test’ services and are able to make recommendations to their State Department of Health on which streams need to be posted to protect public health and where the authorities should begin looking for human sources of pollution that need to be fixed.  Read the full report prepared by Kauai’s BWTF Coordinator below.  Local media coverage here:  thegardenisland.com

Canine Scent Detection of human sewage in streams on Kauai

The ability of dogs trained to detect minute quantities of chemicals is thoroughly documented and this ability exploited for decades now in the widespread detection of illegal drugs, explosives, contraband electronics, decomposing bodies, dangerous invasive species, rare endangered species, truffles, termites, bed bugs, diabetes, and even cancerous cells (wikipedia). It is only logical that scent detection could be used in sanitary surveys to detect the presence of human sewage. Dogs have, in fact, been trained to discriminate between human wastes and that of wild animals.

In light of the discussion between Surfrider Foundation and the Hawaii Department of Health concerning the posting of warning signs at chronically polluted sites, especially in waiting for the results of extensive testing of Waiopili and Waikomo streams in Poipu and the resulting Sanitary Survey for Waiopili stream, the Kauai Chapter of the Surfrider Foundation (Surfrider) has undertaken canine scent detection (CSD) of human sewage at numerous sites around the island.

Testing was done by Environmental Canine Services LLC.  From their brochure:

“Canine scent detection by Environmental Canine Services LLC (ECS) has been nationally recognized for the past eight years as an effective tool for assisting with detection of illicit sewage discharges in stormwater systems and surface waters. ECS canines have been utilized in over 70 sewage detection investigation projects in fourteen different states since the company began in 2009.

A rapid and cost effective method for screening water samples anywhere in the country for the presence of sewage contamination was added by ECS in 2014. The method, called “Ship and Sniff,” consists of collecting water samples from areas of concern and shipping them to ECS for the canines to scent test, using a strict quality control protocol. The canines discriminate between sewage scent and animal waste scent, only indicating the presence of human waste in the shipped water samples. This can help provide valuable information for further monitoring efforts or planning source tracking investigations. ECS canines have completed over 30 Ship and Sniff investigations shipped from 11 different states. ”

Samples of water were collected from Kauai’s streams using either acid cleaned Nalgene 500 mL wide-mouth bottles or with new certified clean Nalgene 500 mL wide-mouth bottles.  The Surfrider sampler wore nitrile examination gloves and thoroughly rinsed the bottles with stream water before filling.  The external surface of the bottle was rinsed with distilled water after sampling. The bottle was then placed and sealed in a new freezer container bag and placed on ice.  The samples were handed over to Dr. Berg under a signed Chain of Custody form.

Sample bottles were again sealed in their freezer container bag, two bottles sealed together in another bag, boxed and shipped to Environmental Canine Services by FedEx.

Seventeen samples were collected, tested for Enterococcus bacteria, and analysed for salinity. They were then canine scent tested.  All samples had extremely high concentrations of Enterococcus and except for Puali tidal estuary, had very low salinity (Table 1).

One sample collected from Puali estuary at Niumalu County Beach Park on 11/20/17 tested positive by both dogs.

One sample was collected each at Anahola, Moloa’a, Hanamaulu, and Nawiliwili stream mouths on 11/20/17. All tested negative by both dogs.

A sample of reclaimed sewage water in a golf course pond was collected on 10/30/17. It tested negative by both dogs. 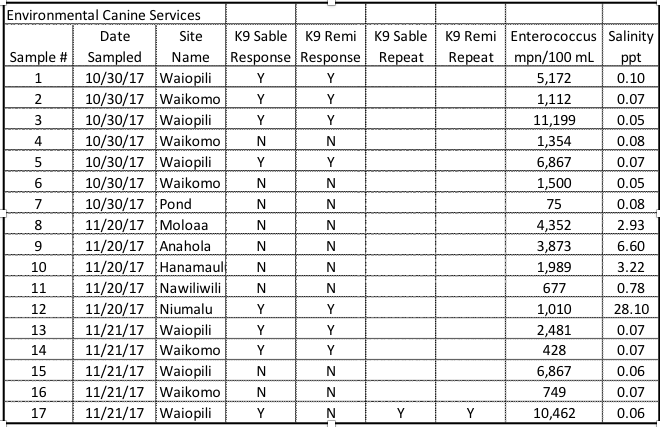 Single sample tests in water from the pond and from four streams with extremely high Enterococcus concentrations were both negative.  No human sewage was detected in those samples but that does not mean that these chronically polluted streams are never contaminated with human sewage.

Variation in test results between samples and sampling dates may be due to different sampling conditions over time, especially in flowing stream conditions. This is also seen in bacteria concentrations and may result from many conditions, including dilution due to rain events, different sewage leakage conditions from the sources and a mixture of higher amount of animal sources in with the human sources that make it harder for the dogs to detect the human sewage.

Earlier testing was performed at Waiopili Stream to determine if the chronically extremely high fecal indicating bacteria counts were due to human sources and a sanitary survey was performed by Hawaii Department of Health (HDOH) to discover the sources. According to the qPCR microbial source tracking data in the HDOH March 2016 Sanitary Survey for Waiopili Stream, human specific Bacteriodales markers HF 183 and BacHum were detected in samples collected on both 7/23/14 and 5/26/15.  The CSD tests substantiate those findings and suggest that human waste contamination still persists in Waiopili stream at its mouth. The results of the HDOH contracted PhyloChip assays done during 2016-2017, i.e. sampled in the time between the qPCR and CSD tests, were due to be completed in February 2017. PhyloChip results need to be reconciled with the chronically high fecal indicating bacteria Enterococcus and Clostridium concentrations, qPCR and CSD data for Waiopili stream.

Waiopili stream is posted with a temporary HDOH “Caution” sign, but HAR 11-54-8 states that if human sewage is present then a “Warning” sign shall be posted to ensure that people do not expose themselves to harmful pathogens that are present in human-sources of fecal pollution. HDOH should use the results of this sewage CSD study, qPCR study, and Surfrider’s Blue Water Task Force 44 monthly bacteria concentration results, to take immediate action to protect public health.

In addition to Waiopili Stream, a “Warning” sign is also warranted at Niumalu estuary where there already is a HDOH permanent “Caution” sign based on chronically high fecal indicating bacteria Enterococcus and Clostridium concentrations.

A “Warning” sign is also warranted at Waikomo stream and Koloa landing where the stream enters the ocean.  HDOH has failed to post that area.

HDOH must locate the sources of human waste contamination and stop wastes from entering recreational waters. Further CSD tests up and down the streams may help locate sources of the contamination. CSD is useful for testing for both point source and non-point sources of pollution.  CSD screening tests are much faster and cheaper than both qPCR and PhyloChip methods and have been used quite successfully and reliably in many other locations to direct and support additional testing and aid in enforcement actions. 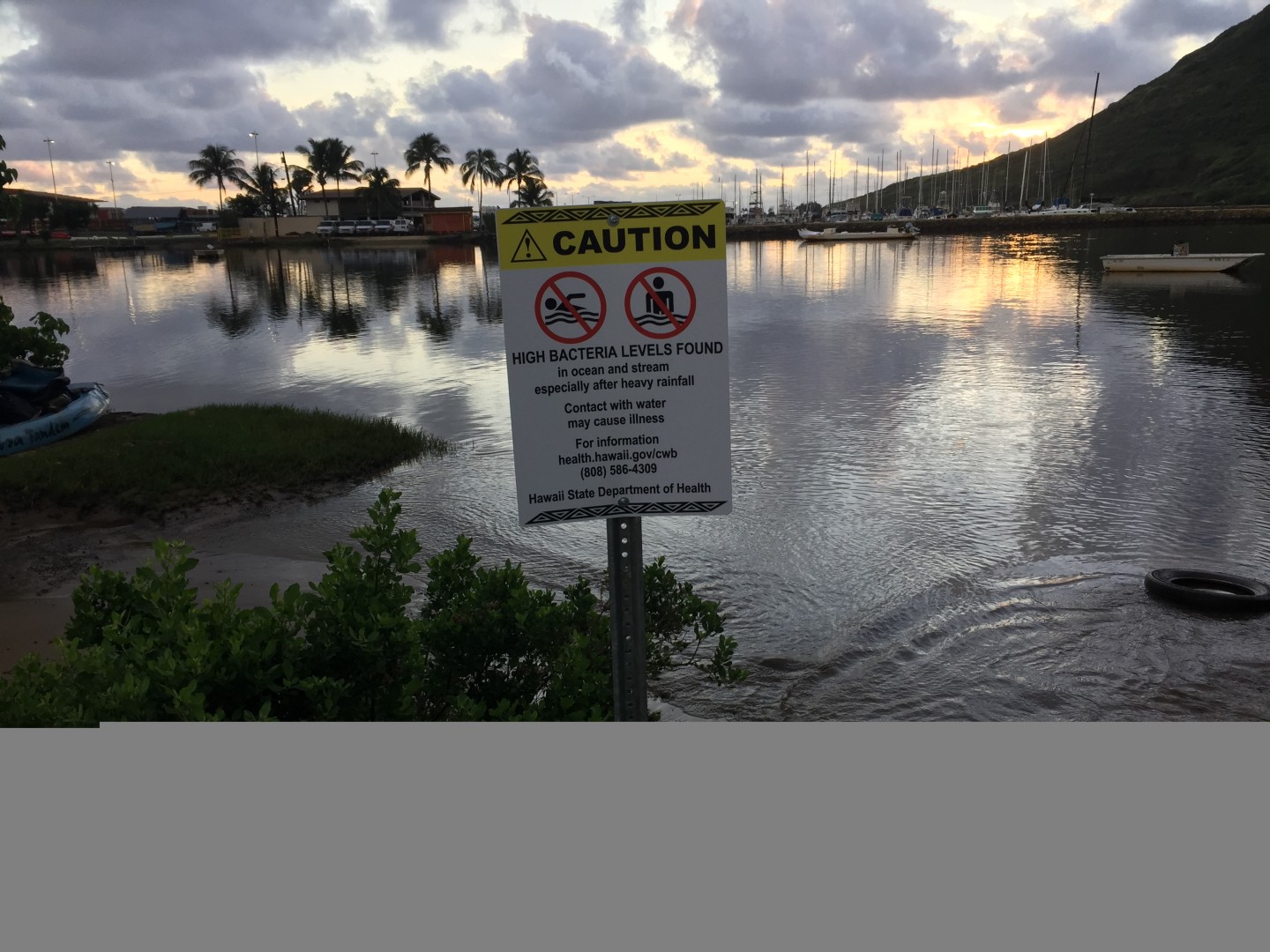