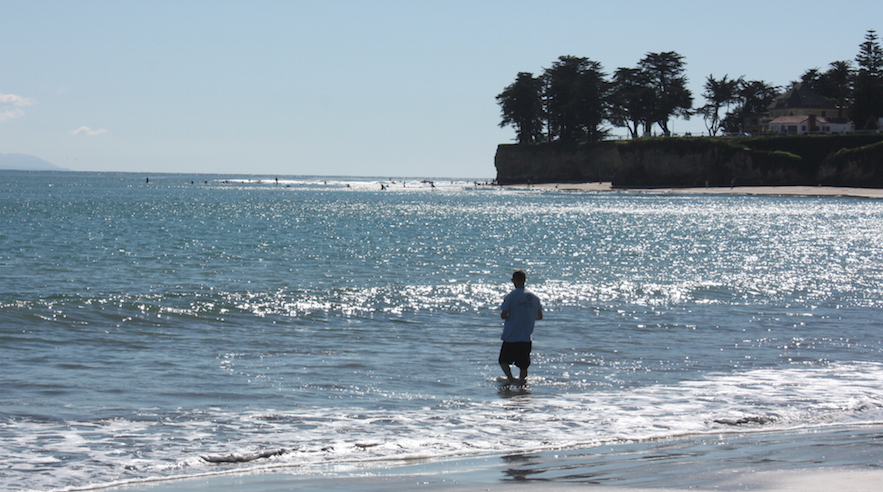 A Surfrider volunteer collects a water sample from the surf at Cowell Beach, Santa Cruz

Cowell Beach in Santa Cruz, California remains at the top of the Beach Bummer list highlighted in the 2015 Beach Report Card released by Heal the Bay.  Heal the Bay reviews bacteria data reported at beaches in CA, OR & WA, and assigns beach grades accordingly.  Statewide in CA, beach water quality has been relatively good this past year likely due to drought conditions that have limited the impacts of urban runoff, which can wash pollutants from the landscape and carry them down to the beach.

Some beaches remain polluted however, and the Beach Bummer list ranks the 10 worst.   Cowell Beach has made this list for the last six years, and 2015 is its second year on top.

While it is certainly a bummer to see pollution problems remain at some of our favorite beaches, this Beach Bummer list has generated public awareness of the problems that plague the affected beaches.  Our Surfrider Chapters are well positioned to engage their local communities and governments to figure out what is causing the pollution problems at these beaches and to start implementing solutions.  The Santa Cruz Chapter has been doing just that.  Below is a press release sent out by the Chapter and their local partners regarding their campaign to Clean up Cowell's.

SANTA CRUZ (June 17, 2015) – While a section of Cowell’s Beach remains on Heal the Bay’s ‘Beach Bummer’ list this year, a new and collaborative effort to address the issue is creating an innovative approach through science, policy change and outreach.

Save The Waves Coalition has teamed up with the City and County of Santa Cruz, the Surfrider Foundation Santa Cruz Chapter, Coastal Watershed Council and the Sierra Club to form the The Cowell’s Working Group.

To date, the group has launched proactive measures including the establishment of a new monitoring site in the surf lineup to determine the extent of the problem.  In addition, the group regularly shares and reviews data across its member agencies. Recent data show the issue seems to be concentrated in a specific area west of the wharf, and the area where people surf is found to have lower bacteria levels.

“As a collaborative group, we are committed to solving this issue,” said Nik Strong-Cvetich, Executive Director of Save The Waves Coalition. “Clearly there is more work to be done and we believe this innovative approach will lead to real progress.”

The group has also made a number of concrete recommendations including:

Significant investment in infrastructure has also been made by the City of Santa Cruz including locating and fixing broken sewer laterals; diverting run-off during the dry season for treatment; sealing off flows to the beach from Neary Lagoon during summer; and monitoring human-associated bacteria DNA to track sources of the issue.

More info about the Santa Cruz Chapter's water testing program and their campaign to Clean Up Cowell's is presented in this case study.