DDT and Toxic Waste Dumped Off the Southern California Coast

Over 25,000 barrels of toxic industrial waste were found off the Southern California Coast, yet the amount of chemicals like DDT still leaking from these barrels remain unclear. Surfrider chats with Scripps professor to learn the history of this waste and if there’s a current risk to marine life and Southern Californians.

Back in 2011, UC Santa Barbara scientist David Valentine and his team of researchers used a deep sea robot (~3000 feet deep) to get the first photos of barrels of toxic waste littering the seafloor, yet the finding failed to stay in the headlines. In October 2020, Rosanna Xia and the LA Times published a story to help expose decades of dumping barrels full of toxic waste off of the Southern California coast, roughly halfway between Palos Verdes and Catalina. This resurgence of awareness and interest helped spark action, and in April 2021 a group of scientists shared results of an extensive mission focused on mapping the area. They counted more than 25,000 barrels that they believe may contain DDT-laced industrial waste.

For an update on the issue we reached out to Dr. Lihini Aluwihare, Professor of Marine Chemistry and Geochemistry at UC San Diego's Scripps Institution of Oceanography, with some questions.

1- Many people have been shocked by the headlines and stories about DDT and other chemicals that were dumped off the Southern CA coast many years ago. Could you start with a brief synopsis of what was dumped, when it was dumped and what researchers have been able to document in the last few years?

The document that many of us have been working with is the Chartrand 1985 report. The LA Times piece by Rosanna Xia is also a must read in this context. In the Chartrand report, the California Salvage Company and the Pacific Ocean Disposal company in particular, are highlighted as being involved in dumping industrial waste.

Between 1947-1961 “acid sludge” from Montrose Chemical company (“2000-3000 gallons per day of DDT acid sludge” containing ~0.5-1% DDT) and “caustic and acid waste” from oil refineries were dumped. The locations where this dumping occurred were not specified, but later, when the LA regional water quality control board began monitoring dumping activities, specific deepwater dumping sites were designated – first “dumpsite 1” (just northwest of Catalina Island in the Santa Monica Basin region), and later “dumpsite 2” (east of Catalina Island, 10 miles offshore of LA, in the San Pedro Basin). Dumpsite 2 is the one that was examined in 2011 and 2013 by Dave Valentine’s group from UCSB. Their video footage shows barrels on the seafloor. In addition to visually recording barrels (~60) on the seafloor, this study quantified DDT and its degradation products in sediments around the barrels. Barrel contents were not directly sampled and it is still unknown what is actually inside the barrels. Nearly 15 years prior to that, I. Venkatesan, working with Alan Chartrand, visited both dumpsites (1 & 2) and detected DDT in the sediments at both locations. This latter study suggested that the amount of DDT directly dumped at deep sites was similar to the amount accumulating off the Palos Verdes shelf (runoff from wastewater treatment facilities off White’s Point), thereby doubling the local Southern California inventory of DDT in sediments.  These estimates were supported by the Valentine study as well.  Nearly 10 years after the Valentine study, “dumpsite 2” was surveyed by Eric Terrill’s group at Scripps Institution of Oceanography with sonar technology mounted on robots, and his group, using machine learning technology applied by Sophia Merrifield (also at Scripps), identified ~25,000 barrel like targets from his data, spread over 36,000 acres. (Scroll down for a map of the area and a photo of the deep sea robot courtesy of Scripps Institution of Oceanography / UC San Diego)

2- Are any of these containers actively leaking toxic chemicals like DDT? How do you know?

I don't know the exact answer to that - there are halos around some containers in the sediments as indicated by the photos provided by UCSB that could be interpreted to suggest that something did come out. The reports state that barrels were actually compromised before getting dumped to ensure they would sink. Also, the paper by Valentine's UCSB group referred to potential signs (on some of the barrels) that something could be leaking out, such as some precipitation and bubbles on the outside, but this is not something that I have direct evidence for.

3- Broadly speaking, what are the potential impacts of DDT and the other chemicals in the ocean?

The primary ecological concern is for resident marine mammals that consume high quantities of locally sourced fish containing these contaminants. As a result, the chemicals bioaccumulate in marine mammals. In addition, because of their high blubber content, they also concentrate DDT and other fat-soluble chemicals, thus biomagnifying these contaminants as well. The work being done at The Marine Mammal Center (Sausalito, CA) suggests that the high body-burden of DDTs make sea lions more susceptible to cancer.

In terms of risk to human health, consuming considerable quantities of DDT, such as by eating contaminated fish is of primary concern. Swimming in the water is not a concern.

Given that we have multiple sources of DDT to the local marine food web, we are not yet in a position to say whether these deep dumpsites are contributing to the current DDT body burden of local biota. However what is known is that the DDT body burden in local marine mammals in our region is among the highest values reported in the world.

4- Are there any current or future threats to ocean recreation or human health in Southern CA and the Channel Islands from these dumped barrels?

There is little threat from recreating in the ocean – summer is here! There are fish consumption advisory data that can help people determine how much local fish is too much. More could certainly be done to monitor this. Furthermore, DDT is not the only man-made chemical to consider when discussing seafood consumption, for example our region also shows elevated levels of PCBs and many emerging contaminants (I direct you to the work of Eunha Hoh at San Diego State University, for example, as well as local offices of State agencies). In coastal locations, the DDT and PCB body burdens do show a decreasing trend, but that doesn’t guarantee that future perturbations won’t release some of these chemicals back into the water column, so we need to understand what those activities might/could be. Raising awareness of how these chemicals move around will help with that.

Additionally, natural toxins like domoic acid, produced by a very specific group of microscopic algae, are also very relevant in this context and can be quite devastating to ecosystems up and down the coast. However, there are many excellent efforts to monitor those blooms or “outbreaks”, including through SCCOOS (Southern California Coastal Ocean Observing Systems).

5- What are the impacts to seafood and marine life?

The toxicological impacts are outside my areas of expertise but I think I answered some of this in question #3. The amount of DDT in relevant seafood is what is most important when considering consumption. There is the fantastic study by Gulland et al. on the potential impact of DDT on sea lion health. Additionally, endocrine disruption in local bottlenose dolphins may also be related to DDT content (Trejo, Hoh et al:  https://www.ncbi.nlm.nih.gov/pmc/articles/PMC6301072/ )

6- What types of cleanup or other mitigation efforts have been discussed?

The focus at Scripps Institution of Oceanography has really been on the following question: what do we need to know about this problem in order for others to manage and minimize the risk that these deep dumpsites pose to ecosystem and human health?  First, we have to delineate the aerial extent of the contamination at these deep dumpsites – that is the first step.  Next, we want to determine whether DDT and other chemicals from the deep dump sites specifically, are entering the marine food web- as I noted before, DDT is present in coastal sediments as well so delineating the major sources of DDT to the local food web is important from a management point of view. Plus, what else might be down there in those barrels? Another interesting question with regard to cleanup is whether natural remediation is going on – a paper by Dave Valentine’s group at UCSB addressed this for a sediment associated bacterium. From a management perspective, how carefully do agencies have to manage future activities in the San Pedro Basin that could disturb sediments or alter the sediments? Answering these questions is crucial for determining how to manage the risk going forward.

7- Is there a possibility that cleanups efforts could do more harm than good by disturbing or dispersing the chemicals?

That is why we are pressing for more research – to address this issue. DDT, its degradation products, and other chemicals detected in these sediments are “sticky” and will adsorb onto solid surfaces like the sediments at the bottom of the ocean or detrital particles (the waste products of the food web) in the water. So, we expect to find these chemicals accumulating in the sediment. Trying to “alter” the sediment content of DDT, especially in these deep waters, will not be trivial. However, we don’t know if these sediments are being mobilized by natural processes that release DDT containing particles into the water. This is another area of research that we are pursuing.

8- What are government agencies doing to address this issue?

We have seen engagement on this issue at all levels of local and state government, and even the Congressional Subcommittee on Water, Oceans and Wildlife of the House Natural Resources Committee recently held a hearing on this important topic. There is clear engagement from our local congress members and also Senator Feinstein. In addition, the Cal EPA appears to be very much engaged in determining the appropriate next steps. I am not sure what exact steps are being discussed right now but what the research community really needs is funding because the accessibility of this deep location requires the use of advanced technology.

9- Is there anything that the general public could do to help elevate this issue and find solutions?

It is important for the public to learn what recreational activities pose risks and what don’t - the public should continue to enjoy the ocean and recreate in it. They can also pay more attention to what they are eating and where it is coming from; there are resources that can provide this information. In terms of ecosystems, it is important for the public to recognize that our activities have lasting consequences for ecosystem health. For example, incidences of cancer in sea lions is apparently quite rare, and so, the study showing cancer in our local sea lions should be something we pay attention to in terms of the environmental impact of our activities – trying to mitigate those impacts on ecosystems going forward is important. I think this problem is also a classic example of how human alteration of the environment can have lasting effects even after the active sources of the disturbance (including pollutants) have been “switched off.” Hopefully the public can see the parallels to other sources of disturbance such as adding CO2 to the atmosphere and the demand for plastics, to name a few.

This is an issue that needs to be studied and addressed so we can manage this area carefully and oversee activities that might remobilize the industrial waste. Furthermore, what we learn here could inform how we approach problems at other deep ocean locations. As such, supporting the continued production of scientific data regarding the risks posed by these dumpsites is something the public could do. Also paying attention to what commercial activities are planned in these regions going forward and ensuring that those plans include a risk assessment is also important. 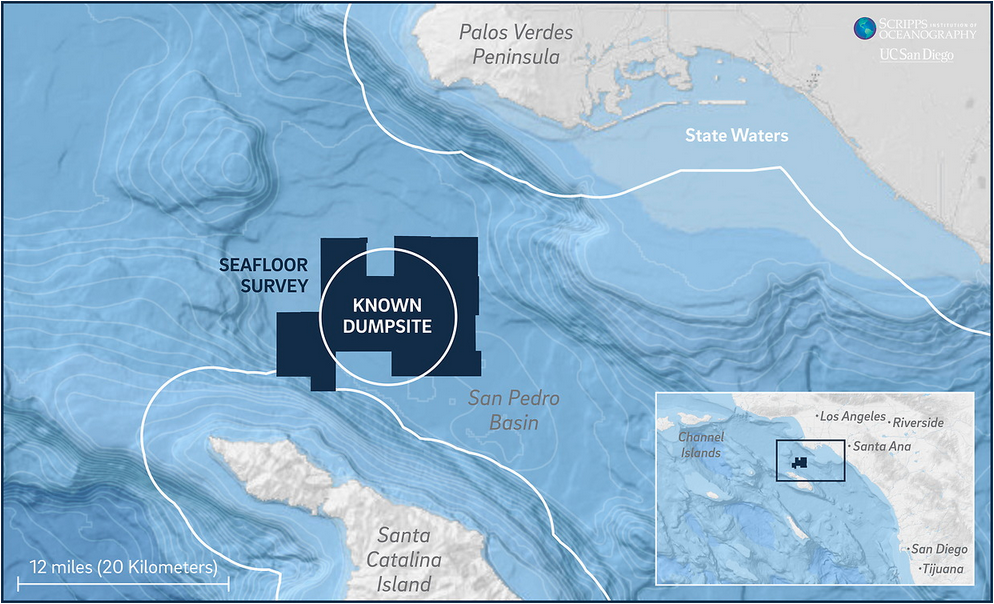 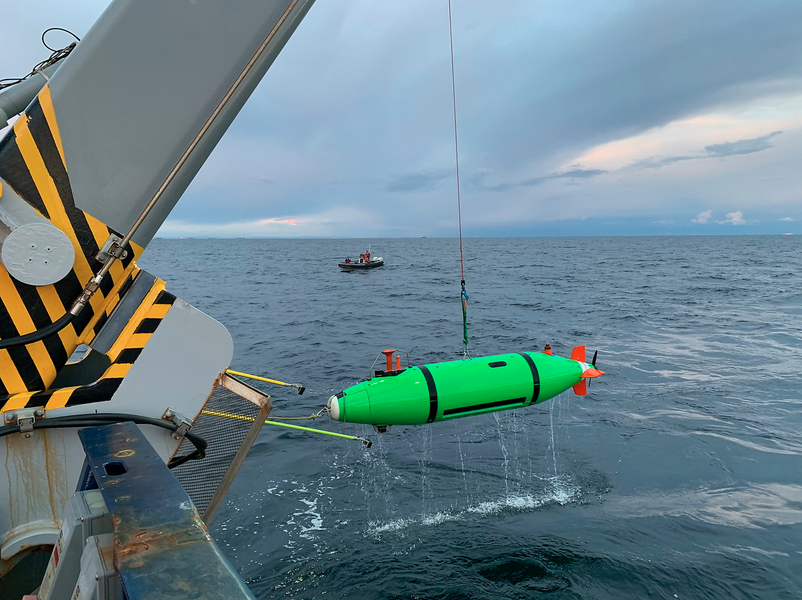