“It’s hard to think of a worse place to store radioactive waste than feet from the beach at San Onofre, which is in the proximity of millions of people, one of the state’s most popular state parks, and home to some of California’s best surfing areas,” said Dr. Chad Nelsen, CEO of the Surfrider Foundation. “There is no immediate solution to removing the waste because the necessary federal repository does not exist. The Surfrider Foundation is committed to ensuring that the storage is done as soon and as safely as possible and we call upon the federal government to find a long term solution to remove and permanently store the waste in a more appropriate location.”

The Surfrider Foundation is opposed to permanent or long-term storage of radioactive waste at the recently deactivated San Onofre Nuclear Generating Station (SONGS) due to its proximity to the coastline, susceptibility to geological instability and location within a densely populated area – nearly 8 million people reside in the vicinity, and it is directly adjacent to one of the United States’ busiest highways. We are actively engaged in advocating to remove the waste as quickly as possible.

A plan to shift the remaining 3.6 million pounds of radioactive waste into dry cask storage systems to a location 100 feet from the SONGS power plant’s seawall may soon move forward. Many who are opposed to the plan, including local residents and the Surfrider Foundation, are concerned that the proposed onsite storage is too close to the shoreline and two nearby fault lines.

Surfer and Stab magazines have highlighted the issue due to potential impacts on the famed waves around San Onofre (including world-class break Trestles) – no one likes to think about radioactive waste in the surf zone. Like much coastal industrial development, locating nuclear power plants along California’s coast wasn’t a forward-thinking move. Lacking the ability to solve the problem by preventing it, we need to look at what is currently possible and press for the best of our limited options, while calling on the federal government to find a long-term solution.

There are potential repositories for nuclear waste that have been listed in Arizona, New Mexico, and Texas. Regardless of where the waste is transferred, it needs to be taken away from our dynamic coastline and off our beach.

We are also aware that simply hauling the radioactive waste to another location isn’t easy. As this is a problem for nearly every deactivated station in the country, there is currently a backlog of spent waste in the United States. At SONGS, waste is currently slated to be stored onsite until 2049, at which point the site operator, Southern California Edison (SCE) would transfer the material to the Federal Nuclear Regulatory Commission (NRC) for offsite relocation if an approved location exists by then as no such facility presently exists.

In October 2015, the California Coastal Commission approved an application by SCE to construct an independent spent fuel storage installation (ISFSI) on site at SONGS, citing to a lack of options. The purpose of the ISFSI is to safely store spent nuclear fuel assemblies until the federal NRC approves transfer to a created, permitted long-term offsite nuclear waste storage facility (for more on this, see the detailed explanation given on the ActCoastal blog). However, the City of San Clemente is now calling upon the Coastal Commission to relook at that decision.

The Coastal Commission’s approval is being challenged in court by those who would like to see the waste removed from San Onofre more quickly and was scheduled to be heard by the San Diego Superior Court on April 14 – but SCE agreed last Friday to begin negotiations aimed at relocating tons of radioactive waste from the San Diego County coastline and requested the judge postpone next week’s hearing at least until July to provide both sides of the dispute time to work out a settlement.

If a compromise is not found and the court overturns the Coastal Commission’s approval, the spent fuel will remain in the cooling pools, where it would be less safe than in dry cask storage, since the pool storage depends on an active cooling system that is more at risk in an earthquake than the dry storage, which has a passive air-cooling system. Independent scientific organizations such as the Union of Concerned Scientists support this assessment.

We are focused on getting this nuclear waste off our beach and facilitating the identification and permitting of safe, effective, long-term solutions for storing the radioactive waste. Currently, we are working with community partners and participate in the SONGS Community Engagement Panel’s quarterly meetings to closely monitor progress and potential solutions. (Click here to view a recording of the latest meeting.)

The main factor in how removal of nuclear waste goes forward is action by the federal legislature. Current legislation H.R. 474, known as the “Interim Consolidated Storage Act of 2017,” would allow Consolidated Interim Storage sites to be permitted and constructed. However, there needs to be a serious mandate for consensus based storage siting with a strict timeline for implementation taken on by the federal government.

Surfrider staff members have also toured the SONGS facility, met with SCE staff to discuss the decommissioning process and have submitted comments regarding the scope of Environmental Impact Report (EIR) for decommissioning.

We will continue to make our voices heard to move the nuclear material away from the bluffs of San Onofre as soon as possible. There is no question that there are better and safer locations for this material than along the densely populated coastline of earthquake-riddled southern California.

Here’s what you can do: 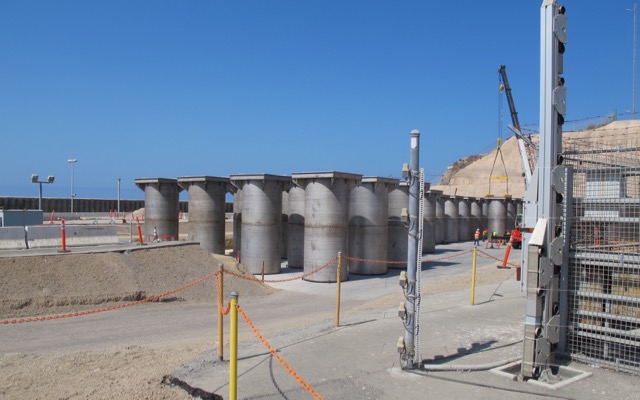