Protecting our ocean, waves and beaches through community, partnerships and citizen science 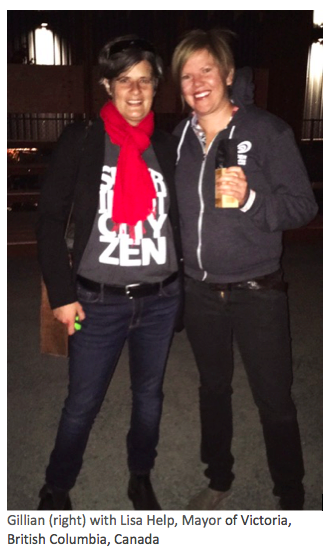 Over the past 15 years, Gillian Montgomery, Chapter Manager of the Vancouver Island Chapter in Victoria, B.C., has fought hard to reduce plastic pollution and improve the health of beaches and waterways in Mexico, Israel, Chile and now on Vancouver Island. She has been a member of Surfrider for eight years, and an active member of the executive committee of the Vancouver Island Chapter for five. Over the past three years, Gillian has led the chapter to a number of victories, including successful campaigns and programs: Ban the Bag, Hold On To Your Butt, Blue Water Youth Taskforce, and Surfrider Approved Business Certification.

The Vancouver Island Chapter has been running strong since its inception in 2005. Initially, most of the success of the chapter came from its strong sense of community and loyalty among volunteers who participated in the local cleanup program. The Combing the Coast program is the most established beach cleanup program on Vancouver Island. Volunteers have been working tirelessly at cleaning up and monitoring marine debris at 12 local beaches and 1-2 remote beaches a year for over a decade. There is always a great turn out at each of the monthly cleanups (50-100 or more volunteers) and the remote cleanup is the most popular program activity.

As the Chair of the chapter for 2014 and 2015, Gillian saw the success of the citizen science aspect of the Combing the Coast program, and initiated the Blue Water Youth Task Force program. She saw that there were several volunteers with the right expertise and aptitude to make the program a success, and championed them into being the eventual leaders of the program. There has been strong leadership and countless volunteers dedicating their time and expertise to this weekly water quality testing program, with more expansions expected this year.

The success of the Vancouver Island Chapter comes from their strong partnerships. Those who started the Chapter are still involved today, making the local volunteers the most valuable partnership. However, one of the keys to the recent successes has been the relationships that the chapter has developed with the local government officials, City of Victoria staff, business leaders and donors. Gillian has been helping to build these relationships through her understated yet charismatic approach to building long-lasting partnerships. She is one of the most recognized faces in Victoria.

Gillian recently accepted the Mayor's Medals Environment award. The Mayor's Medals awards celebrate those whose work creates real impact in Victoria, everyone from CEOs, to security guards, teachers to health care workers - all nominated by their peers. The award winners are selected by a diverse panel of 12 including the Mayor, city councillors, business leaders and residents. Jill Doucette, one of the panellists and founder of Synergy Enterprises, stated that the panel had an easy decision when it came to this award. “Everyone on the panel knew Gillian and her great work with Surfrider.” Though the panel dedicated three hours of time to select only six award winners, Gillian’s award was decided on in a matter of seconds.

Congratulations to Gillian and the Vancouver Island Chapter for all their work and dedication to “protecting oceans, waves and beaches!”