Oregon State U published an article about 10 days ago detailing their study on plastics in the ocean had determined that the North Pacific Garbage Patch (NPGP) ain’t “nearly as big as portrayed in the media”. Apparently forgotten at OSU is the Nike shoe incident that 1) besmirched Oregon beaches in 1990 and 2) gave us an early indication that the Pacific Ocean had a growing problem trying to accommodate our land-based infusion of garbage...? Who knew? 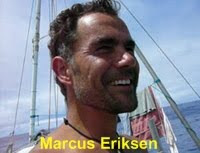 One person that can speak with authority in rebuttal is a man that has traveled (and is currently traveling) through all of the world’s ocean gyres to survey the extent of plastic pollution worldwide (while academics debate garbage patch sizes back home…?). Marcus Eriksen, PhD, co-founded (with his wife, activist & Stanford graduate, Anna Cummins) the 5Gyres Institute to go beyond the research in this field that they were doing while working with Algalita Marine Research Foundation. You may know Algalita as the group that “discovered” and initially drew our attention to the NPGP, and you may know Marcus from his adventure “sailing” to Hawaii from the US mainland in a “JunkRaft” made of trash, again bringing attention to the problem of the NPGP. Here is his word on the matter of debating the NPGP’s size/existence, the media AND how we can help fight the plastic pollution problem:

Media is sometimes the tail that wags the dog of science. One oceanographer described finding plastic in his relatively tiny Texas-size study area of the North Pacific Ocean, while another began describing these areas of concentration as “garbage patches”. A mis-information frenzie birthed a mis-conception of an island of trash. Hurry, someone plant a flag - sell real estate! Disappointing to the entrepreneurial spirit that aimed to fix it for a fee, there are no such islands. They do not exist. Having traveled 20,000 miles across 4 of the 5 subtropical gyres, returning from crossing the South Atlantic Gyre in December 2010, I assure you that reality is much worse.

It’s a patchy patch. In 1999 Captain Charles Moore, founder of the Algalita Marine Research Foundation based in Long Beach, CA, published an observed 6:1 weight ratio of plastic to plankton in the swirling center of the North Pacific Subtropical Gyre. I joined him in 2005 and 2008 to the same region. In this decade of research, the foundation was heavily criticized by other oceanographers for quantifying plastic this way. What was hidden in this criticism was the fact that the science of Oceanography was caught off guard. No one knew of this plastic plague on the world’s oceans, until a Long Beach surfer/sailor turned scientist made it known. It is true that plankton is extremely variable, and can bloom and dissipate with the season, temperature, moonlight, and a dozen other variables, therefore the margin of error is huge. But the plastic/plankton ratio serves a good anecdote for relative abundance of plastic to available food for scavenging fish and filter feeders, like from jellies to baleen whales. So, it’s important to describe plastic to plankton ratios as an anecdote, but not worth quantifying.

1999 was not the first time scientist studied plastic pollution in the ocean. Thor Heyerdal observed plastic in 1969 crossing the North Atlantic on Ra I. Two years later Edward Carpenter, from Woods Hole Oceanographic Institution, netted pellets and fragments of plastic pollution between the east coast and Bermuda. Plastic pollution in the North Pacific Gyre was first described by Robert Day in 1989 near the coast of Japan, and in the South Atlantic Gyre near Cape Town, South Africa in 1980 by Robert Morris of the Institute of Oceanographic Science in the UK. It was a quiet, poorly-understood menace that palled in significance and interest to oceanographers. Then the story broke about an island of plastic, with sensationalized accounts beyond science, mythological masses of synthetic detritus, an illusive terra aqua.

“Somebody do something,” cried the ocean advocates, artists, celebrities and politicians. And the scientists followed. Media called them to action. But not before the industrialists. A problem precedes a solution ready to sell. Groups with little or no experience at sea rose to the occasion with fanciful technofixes, contraptions of grandeur, robotic vagabonds to sieve the sea in solitude and bring the trash back to land, or parachutes that spin sickle-shaped islands that net plastic pollution in their path. All have failed, realizing that going to the ocean to remove floating plastic particles is like standing on the top of a skyscraper with a vacuum cleaner to remove air pollution. It’s not impossible, just impractical. There is no island to retrieve. We have run expeditions across the North Pacific Gyre, North Atlantic Gyre, Indian Ocean Gyre, and in December 2010 we crossed the South Atlantic Gyre. We found plastic in every surface trawl, in varying concentrations. Imagine a handful of degraded plastic confetti spread across a football field of the ocean surface. That’s as thick as it gets, but it’s everywhere. It’s a think plastic soup over 2/3rds of the earth’s surface. So far the 5 Gyres Institute has traveled to 4 of the 5 subtropical gyres in the world, conducting over 400 surface trawls, with plastic in every one. That is the menace of plastic pollution. It’s everywhere, thinly distributed, and extremely impractical to clean up at sea.

But if no one cleans it up, will the garbage patches keep growing? No. Studies in the North Atlantic Gyre and North Pacific Gyre have been repeated with interesting results. There’s no massive trend in plastic accumulation over time. Kara Lavender Law, of Sea Education, compiled data from 22 years of data from the North Atlantic Gyre, the same area that Carpenter studied 3 ½ decades earlier. “We observed no strong temporal trends in plastic concentration…” Last week we returned from 31 days crossing the South Atlantic Gyre. As we sailed into Cape Town we revisited half of the locations that Morris studied 3 decades ago and repeated his exact methods. Though our samples have not been analyzed yet, I can anecdotally report that the samples do not appear to show a tremendous trend in plastic accumulation over this time. Sure, there’s more, but the increase does not parallel the rapid increase in plastic production and consumption on land. So where does it go? We believe some sinks as absorbed chemicals, like PCBs, PAHs and other persistent pollutants, and biofouling make smaller and smaller particles more dense than seawater. Much of it washes ashore on islands in the gyres, like Hawaii and Bermuda, or is kicked out of the gyres onto mainland beaches as the gyre’s center wobbles east and west. Then there’s still room for unknown answers. What we now know is that if we stop adding more plastic to the ocean, in time the gyres will kick out the plastic pollution they currently hold. If you want to clean the gyre, clean your beach.

We want to know a few things. How much plastic is out there, what is the fate of plastic in the ocean, what is the impact of plastic pollution on fish, including fisheries we harvest to feed the world, and how do we end the plague of plastic in the ocean? The 5 Gyres Institute will sail across the South Pacific Gyre in the Spring of 2011 from Valdivia, Chile to Easter Island. You can follow this expedition on 5gyres.org. In January and February 2011, at the moment I’m writing this paper, we are crossing the South Atlantic Gyre again. The South Pacific will be our 5th gyre, and provide a snapshot of the global distribution of plastic pollution. We will also be freezing fish to look for toxins in tissues, which we are currently doing with fish collected from South Atlantic Expedition. Other expeditions conducted by SCRIPPS, NOAA and Sea Education, are contributing answers to these questions with rigorous science. All of this will be shared by colleagues in March 2011 in Hawaii during the 5th International Marine Debris Conference.

In the recent decade of rogue-science, media spun mis-information, a new revitalized science of synthetic pollution at sea has emerged, replacing confusion with clarity and commitment by many to solve the problem. The idea of cleanup at sea is no longer a sensible option, knowing that an island twice the size of Texas is actually a thin soup 2/3rds the surface of the planet. Sensible solutions now focus on preventing the flow of waste to waves in the first place.
=======================

Oh yessss - one other item of interest: an article from French and Belgian scientists about the growing problem of plastic “micro-debris” in the Mediterranean. Synopsis: “The only solution is to stop micro-debris at the sources,” said Expedition MED’s Bruno Dumontet.

HAVE A GREAT WEEKEND!!