The House of Representatives passed legislation today to permanently ban offshore drilling in large portions of U.S. waters. The Senate also needs to pass the measures for the bills to become law.

Ever since the Trump administration announced plans to expand offshore drilling to over 90% of U.S. waters, lawmakers from both major political parties have been seeking ways to stop new oil and gas development off our coasts. This week marked a key milestone in that effort as Congress passed HR 1941 by Rep. Joe Cunningham (D-SC) and HR 205 by Rep. Francis Rooney (R-FL) to permanently ban offshore drilling off the Atlantic, Pacific, and Florida Gulf coasts.

Areas Proposed for Offshore Drilling by the Trump Administration 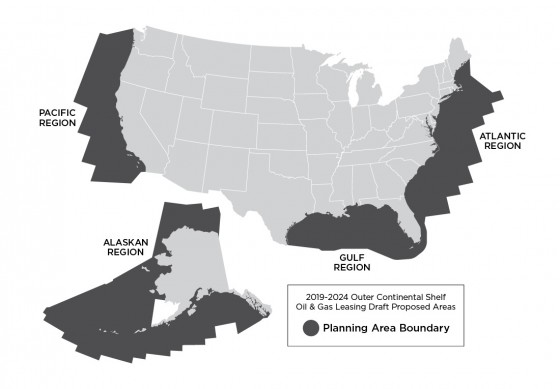 “The Surfrider Foundation applauds the House of Representatives for listening to the American people and taking bipartisan action to protect U.S. coastlines from the damaging practice of offshore drilling. New drilling would pollute the ocean and put our nation’s coastal communities and economies at unnecessary risk. Today’s outcome is a major testament to the efforts of coastal advocates, elected officials, businesses, communities, and the recreation industry, which have fought tirelessly to defend our nation's coasts from new offshore drilling.”

While both anti-drilling bills passed with comfortable margins in the House, passage of the bills in the Senate is expected to be much more difficult as several Senate leaders have vowed to block the legislation from moving forward. If the Senate does pass the bills, President Trump is expected to veto the legislation given the administration’s focus on expanding oil and gas development.

Nevertheless, the House of Representative’s passage of the anti-drilling bills is an important milestone in Surfrider’s campaign to permanently protect our nation’s coasts from new offshore drilling. The strong bipartisan support that both bills received shows that both Republicans and Democrats understand the risks and impacts of offshore drilling, and will fight any attempt by the Trump administration to proceed with revising the 5-year offshore drilling program

H.R. 1941 and H.R. 205 were supported by every West and East Coast governor; more than 2,100 elected officials from both parties and from all levels of government; 369 municipalities and counting; over 50,000 business interests; and over 500,000 fishing families. Last year, the National Congress of American Indians adopted a resolution opposing offshore drilling.