In Memory of Matthias Denys

On a New Year’s Day trip south along highway 1, years ago, we passed the area of Morro bay when Matthias asked us to stop so he could take his boogie board into the ocean. An hour later, he came out of the water, blue and shivering from the cold as he had no wetsuit on. To our surprise, he did not complain but found it amazingly fun. He was 12 years old and his love for the ocean was born. Surfing became his sport.

As the years passed and while in high school, he would sneak out of the house in the very early morning hours and together with a good friend drive to Santa Cruz, 45 miles away, to go surfing before being back in school at 8:00 o’clock. A story we only found out later. At the beginning of one high school summer, Matthias applied for a job listing at a financial institution only open to Stanford University students. Despite his young age, he was accepted, but only after he had negotiated the option to leave his job early when ‘the surf was up’. He also volunteered and traveled several summers with Amigos de Las Americas to South America and commented that he met happy people despite having few material goods. After college he entered the tech industry during the dot-com heyday. Because of his creative talents, he became a successful web designer of a startup, despite his lack of formal training. His artistic talents were also reflected in his passion for photography. He would even go on to design his own surfboard graphics. Matthias was truly an inspiration to many of his friends and others in need. One friend commented on his charisma: “When Matthias walks in, the lights go on”. Yet, in March 2003, Matthias passed away leaving us with so many wonderful memories of a bright, witty surfer and friend to so many people.

As his family, we now realize that, despite his success in life and the numerous friends he surrounded himself with, surfing fulfilled another role: in calming his mind. Eventually that did not suffice and a big wave of depression took Matthias from all of us.

With love, Eric, Sonja and Steven
His parents and brother.

The Surfrider Foundation would like to thank the Denys Family for setting up a fund in memory of Matthias and ensuring that that our oceans and coasts are protected for future generations of surfers. 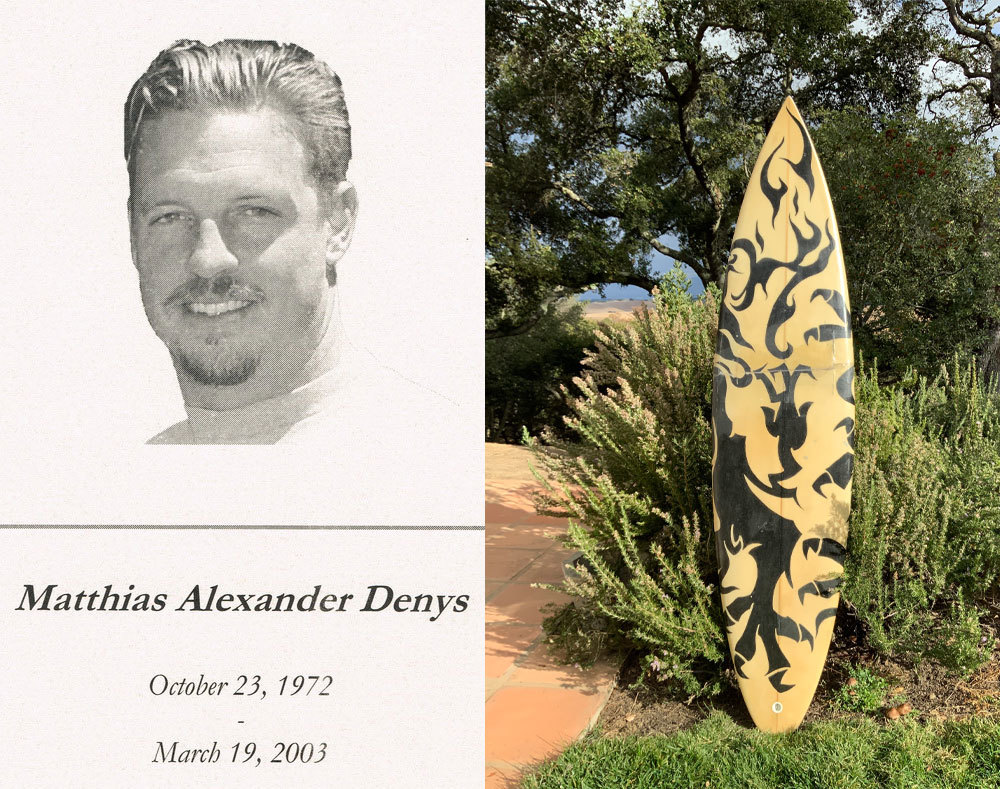