People have been enjoying the beaches of Walton County, Florida for generations.  In fact, archaeological evidence shows native people utilized Walton’s shores in 3,000 B.C..  The custom of using the beaches, for things like fishing, walking, horseback riding, swimming, sailing, and simply being, has been such a way of life for the County’s residents and visitors – who often come to Walton County for that very purpose – that it is ingrained and expected that people have a right to continue to use Walton’s sugary sandy beaches for those purposes.

And according to the Florida Supreme Court, they do have that right.  “If the recreational use of the sandy area adjacent to the mean high tide has been ancient, reasonable, without interruption, and free from dispute, such use, as a matter of custom should not be interfered with by the owner.”   (Tona-Rama v. Daytona Beach, 294 So. 2d 73 (1974))

Recognizing the importance of the Sunshine State’s sandy beaches, the Florida Supreme Court plainly declared even further, “We recognize the propriety of protecting the public interest in, and right to utilization of, the beaches and oceans of the State of Florida. No part of Florida is more exclusively hers, nor more properly utilized by her people than her beaches. And the right of the public of access to, and enjoyment of, Florida's oceans and beaches has long been recognized by this Court.”

As such, when more and more beach front property owners started putting up ropes, chains, signs, and the like, out on the sand (sometimes all the way out into the water), members of Surfrider’s Emerald Coast Chapter took notice and decided to do something about it.  Not only do these items interfere with the public’s right to access the beach, but they endanger beachgoers' health and safety, by restricting access for emergency responders like lifeguards.  The items themselves also have the potential to trip or otherwise injure beachgoers.  Emerald Coast Chapter activists have on multiple occasions seen dangerous concrete bases sticking out of the sand, where presumably, signs once stood, but were washed or blown away. 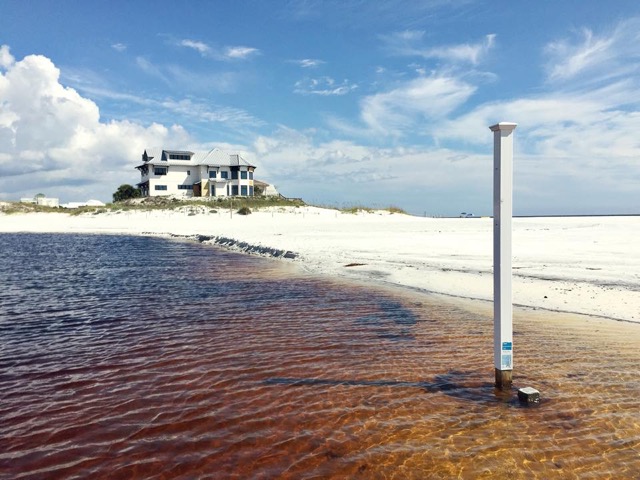 Surfrider further engaged to urge Walton County to adopt an ordinance recognizing the public’s right to use the County’s dry sand beaches, based on custom.  Chapter members voiced their support at County workshops, and recent County Commission meetings.  This campaign met success, when the County adopted a Customary Use Ordinance, in October.  The ordinance is slated to go into effect in April 2017, and in the meantime, may be revised and improved upon by a proposed “Customary Use Committee” to be formed by the County, in the coming months.  As adopted, the ordinance acknowledges the public's right to use Walton County's dry sand beaches for recreation based on customary use, but provides for a 15 foot buffer where the public may not go, within 15 feet of any habitable structures or toe of the dune, whichever is more seaward.  While the ordinance does not create any new rights, it is important in that it recognizes and protects the public's existing right to access the dry beaches of Walton County, which the public has established through not just decades - but hundreds of years of use.

These two local ordinances upholding the public’s rights to access the beach are cause for celebration in a County where space to put down a beach towel  has become a hot commodity.  And yet, the challenges aren’t over.  Both ordinances have come under fire by some local beachfront property owners, alleging they interfere with first amendment free speech rights, and constitute a “takings” of private property rights (See Alford v. Walton County & Goodwin v. Walton County).  However, these claims have no merit.  The Obstructions on the Beach ordinance prohibiting signs and other obstructions from the beach is content-neutral and reasonable, given the County’s substantial interest in protecting beachgoer health and safety by preventing items obstructing emergency responders on the beach, as well as preventing visual blight.  Additionally, signs are not banished from the entire property – only the sandy beach – leaving open ample alternative means for property owners to speak their minds.  Finally, there’s no right to keep people off sandy beach property with trespass signs, when the public has a right to be there based on historic custom.  And here, they do.

Surfrider members and supporters have used the beaches of Walton County for generations.  They’ve surfed, thrown footballs, bird watched, driven Jeeps, ridden horses, picnicked with friends and family, built sand castles, and sunbathed.  As the Florida Supreme Court has acknowledged, this “right of the public of access to, and enjoyment of, Florida's oceans and beaches has long been recognized by this Court.”  (Tona-Rama v. Daytona Beach (1974)).  Surfrider Foundation will continue to monitor these pending matters in litigation, and engage in local public processes, to ensure the public’s beach access rights are fully defended.