In the 1640s, most major colonial settlements in North America were situated along bodies of water—bays, coves, rivers, lakes, and the ocean. To encourage littoral owners to build piers and wharves, Massachusetts Bay colonial authorities extended private title of property to the mean low water mark. As landowners constructed piers and wharves out from their land, they opened up the coastline for commercial trade and travel. Locations such as Boston Harbor thrived throughout the Massachusetts Bay Colony.

So, these guys can use your land, but surfers can't?

During this same era, in addition to their providing a key source of transit and communication, bodies of water were a prime source of sustenance. Fish and waterfowl were integral components of colonists’ diets.

So, when the Massachusetts Bay Colony passed its Body of Liberties ordinance in 1641 and amended it in 1647, titling it the Liberties Common, not only did it provide for private property ownership to the mean low water mark, but it granted a public easement over the intertidal zone for fishing, fowling, and navigation:

Every inhabitant that is an howse holder shall have free fishing and fowling in any great ponds and bayes, coves and rivers, so farre as the sea ebbes and flowes…

…in all creeks, coves and other places about and upon salt water, where the sea ebbs and flows, the proprietor or the land adjoyning shall have propriety to the low water mark, where the sea doth not ebbe above a hundred rods, and not more wheresoever it ebbs further: provided that such proprietor shall not by this liberty have power to stop or hinder the passage of boats or other vessels, in or through any sea, creeks or coves, to other men's houses or lands.


Parts of three present-day coastal states were once part of the Massachusetts Bay Colony: Massachusetts, Maine, and New Hampshire. To this day, both Maine and Massachusetts continue to abide by the Body of Liberties and Liberties Common. They recognize littoral landowners’ property rights down to the mean-low-water mark; and, both Maine and Massachusetts still have only expressly recognized the public easement over the intertidal zone for activities directly relating to fishing, fowling, and navigation. See, e.g. Bell v. Town of Wells, 557 A.2d 168 (Me. 1989) (overturning a state statute granting a public easement for recreational use of the intertidal zone), Eaton v. Wells, 760 A.2d 232 (Me. 2000), Michaelson v. Silver Beach Imp. Ass’n, Inc., 342 Mass. 251 (Mass. 1961).

New Hampshire, on the other hand, has taken steps to guarantee broader public access and enjoyment to her beaches. Back in 1862, the Supreme Judicial Court of New Hampshire, in Clement v. Burns, 43 N.H. 609 (1862), declined to follow the 1641 ordinance: “As a rule of positive law, the ordinance of 1641 was not binding upon New-Hampshire.” Clement at 13. Then, in 1889, the court discussed why New Hampshire rejected the Massachusetts Bay Colony ordinance’s extension of private property rights to the low-water mark:

While the [Massachusetts] ordinance maintains the public title of large ponds, it converts to private property, and gives away, a great amount of tide-land… In this state, the transfer of the fee to the abutters has not been necessary to encourage improvements below high-water mark. Their common-law right of reasonable use has been sufficient for all the purposes for which the [Massachusetts] ordinance changed the common-law title…. Private ownership of so much of the tide-land (not exceeding 100 rods in width) as is bare twice a day, and public ownership where vessels can come to a wharf at low tide, is not an adequate or useful adjustment of rights for commercial purposes. Where tide-land ought to be improved and occupied by the abutter, above and below low-water mark, he has a common-law right to improve and occupy it.

So, on the one hand, New Hampshire has adopted a common-sense approach that allows citizens to stroll along the wet sand and enjoy the scenic ocean without worry of trespassing onto private property.

On the other, however, Massachusetts and Maine have opted to follow the 17th Century Massachusetts colonial ordinance. In those states, according to a strict and what some may argue is an obsolete interpretation of the colonial ordinance, beachgoers possess an easement over the intertidal zone for bird hunting, but not bird watching. Similarly, beachgoers are more prone to citation for carrying a surfboard across the intertidal zone, rather than a harpoon gun. The Maine judicial system has acknowledged this flawed logic: “Pursuant to our holding in Bell, a citizen of the state may walk along a beach carrying a fishing rod or a gun, but may not walk along that same beach empty-handed or carrying a surfboard.” Eaton v. Town of Wells, 760 A.2d 232 (2000) (Saufley, J., concurring). Yet, the state has not yet fully rectified this nonsensical distinction.

The Surfrider Foundation, and its Northern New England Chapter, have been fighting on behalf of beachgoers to push for extending the definition of “fishing, fowling, and navigation” to include surfing, SCUBA diving, and other more-tangential forms of navigation. Those cases are currently pending. 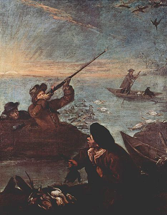