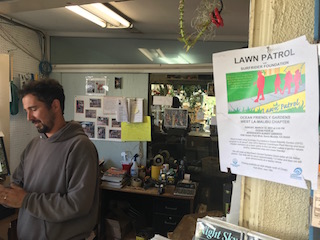 Seeing is believing, and seeing an Ocean Friendly Garden up close is a great learning tool for those new to OFG principles. This last weekend, the Ocean Friendly Gardens Committee of the Surfrider West LA/Malibu Chapter led a “Lawn Patrol” (a garden walk) of 15 people through a neighborhood of a few good examples and lots of homes with “opportunities.” As a bonus, the Committee was joined by staff from the city in which the garden exists and learned that the city wants to partner on future walks! 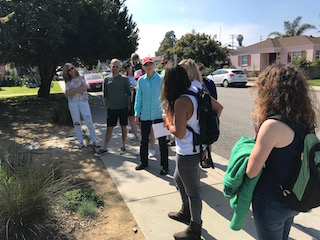 The concept behind the walk is to help participants develop an eye for evaluating a yard's opportunities to “apply CPR:” Conservation, Permeability and Retention. The walk route is scoped out ahead of time to, ideally, have at least one yard that has applied CPR (this one was organized by WLAM OFG Committee Member, Insley Julier). Everyone gathered at Merrihew's Nursey, which allowed Insley to post an event flyer (in the first picture), then got started. The first stop was a home that had some elements of CPR applied, so it was a good place to point out how other steps could be taken. For example, the rain gutter downspout was directed into the garden, but there was no contouring to slow and spread the rain, i.e., a swale and basin. It also had no mulch and no native plants (OFG criteria require a minimum of 10% natives). 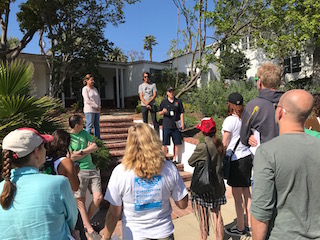 The next stop was an OFG created by Committee member and landscape designer, Steve Williams, and which qualified for a rebate from the City of Santa Monica. Russell Ackerman, a Water Resources Specialist with the City (in the picture, he's standing on the steps and in black), joined us there and explained the City's landscape rebates and goal to be 100% water independent by 2020. In addition, the City offers a subsidized site evaluation by a garden “coach,” costing just $50. 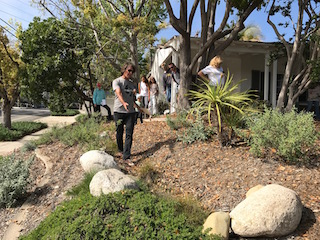 Russell told us that 10 people have applied for the City's new rain garden rebate ($1,000 for each downspout directed to the landscape, and City staff do a site visit to help identify the best layout). He proposed that the City and WLAM partner on future walks, focused on those new rain gardens, and everyone was excited about the idea. 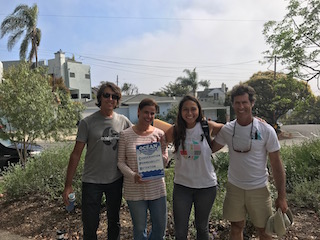 Next, Steve (in the grey shirt and wearing sunglasses) explained the design for the garden, which was done by his non-profit, Eco Gardens. 1900 square feet of turf grass was removed, which qualified for the City of Santa Monica's rebate of $3.50 per square foot. Two downspouts were directed into swales and basins, netting property owner Toby Berlin another $2,000 in rebate funds. A total of 775 square feet of roof is fed into the downspouts, resulting in 7,120 gallons of rainwater directed to the garden each year! With the combination of the plants being mature, living soil and already at average rainfall for the winter, the garden will have a good chance of not needing any more irrigation this year. Toby is stoked by the environmental benefits and beauty of her OFG, and was happy to post the OFG sign she qualified for (in the picture, she's holding the sign, standing next to WLAM Chapter Chair, Tina Segura). 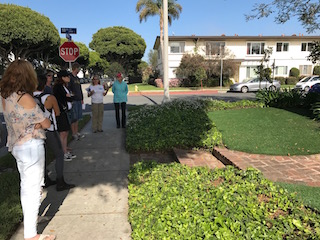 Landscape Architect, Dale Newman, joined us on the walk and mentioned that he did a garden along the route, so we stopped there. (Not only is Dale interested in the OFG Committee, he also wants to be a part of beach clean-ups that happen right after a rain storm - and Tina mentioned WLAM's recent formation of this very kind of effort.) The last site was a yard with artificial turf, shown in the last picture (the bright green patch).  Artifical turf does the opposite of an OFG, compacting soil microbiology and killing its ability to cleanse and hold onto water, sequester carbon, and provide wildlife habitat. There are low water-using grasses and ground covers that are good alternatives.

We finished up at a nearby frozen yogurt shop, talking about next steps and having trained people who can lead future walks. Insley brought compostables spoons that she showed the store staff to use instead of plastic one - a move toward becoming an Ocean Friendly Restaurant!