The Texas Legislature recently passed H.B. 3459, which the governor signed into law June 14, 2013.  The new law amends the Texas Open Beaches Act, which means it will have an effect on public beach access.  However, because the law grants a significant amount of decision-making authority to the General Land Office, the nature and degree of its impact remains uncertain.

The Texas Open Beaches Act (“TXOBA”), passed in 1959, protects public access to the 367 miles of Texas coastline along the Gulf of Mexico. The act is a unique codification of rights held by the public in Texas since time immemorial: the rights to access and use the area of the beach located between the mean low tide mark and the line of vegetation.  Expressing these rights, the law states that the public: 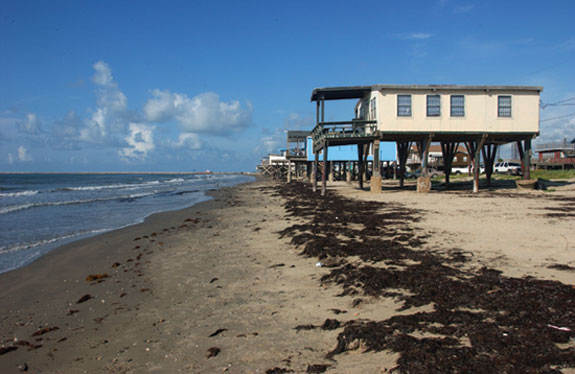 The Texas Supreme Court strayed from this “rolling easement” interpretation in the landmark decision Severance v. Patterson in 2012, significantly weakening the Open Beaches Act’s longheld strength in protecting public access.  In Severance, the Supreme Court established a distinction between avulsive events (those events, such as hurricanes, that cause a rapid loss of land to the ocean) and the slower processes of erosion and accretion that also affect the line of vegetation and the low tide mark.

H.B. 3459 addresses this distinction by granting new authority to the Commissioner of the General Land Office to suspend the determination of the line of vegetation after it is destroyed by a “meteorological event” and to then determine the location of the new line of vegetation.  The new law defines “meteorological event” to include both atmospheric conditions that cause a sudden loss of land (avulsive events) as well as those caused by accretion and erosion.

The new law appears to be a mixed bag for coastal access advocates.  On one hand, it codifies the distinction between avulsive events and slower-acting accretion and erosion processes, a distinction that enabled the court in Severance to significantly weaken the Open Beaches Act.  On the other hand, it gives authority to the Commissioner to determine the new line of vegetation or suspend the determination for up to three years when the line of vegetation is obliterated.  This has the potential to work for coastal access because instead of the line of vegetation remaining in its pre-avulsive-event location as required by Severance, up to three years may be allotted for the shoreline and line of vegetation to reach a new equilibrium.  This may preserve more of the public beach.  It also vests more authority in a state agent who could have greater potential to determine the line of vegetation in such a way that protects the public beach.

The new law also establishes a joint interim committee to study the effectiveness of the new changes instituted by H.B. 3459, as well as the “feasibility and desirability” of creating and maintaining a coastal barrier system (e.g. the “Ike Dike”), and the authorization of coastal property owners to grant easements to local governments to construct stabilized dunes.  The committee is to issue a report by December 1, 2014 with its findings.  Surfrider and its activist network will be active in offering suggestions to the joint interim committee to ensure Texas keeps its commitment to open public beaches and is informed on best methods for effectively preserving and protecting the Texas coast.