Members of the public have 60 days to provide input on the proposal to create a new National Marine Sanctuary off California’s central coast.

Over six years ago, the Northern Chumash Tribal Council officially proposed the establishment of a Chumash Heritage National Marine Sanctuary off the central California coast with support from Surfrider Foundation’s San Luis Obispo Chapter, the Sierra Club and other partners. Now, the federal government has announced a Notice of Intent to proceed with a sanctuary designation in the region. The agency is inviting the public to provide input on the concept and will begin preparing an environmental impact statement. You can show your support for the proposed Chumash Heritage National Marine Sanctuary by signing on the Northern Chumash Tribal Council's support letter HERE and learn more about how to support NCTC's sanctuary advocacy efforts HERE.

“The Surfrider Foundation applauds NOAA for moving forward with a National Marine Sanctuary designation off the central California coast. The establishment of a marine sanctuary off San Luis Obispo will help protect vital marine and recreational resources, while honoring the indigenous peoples who have lived in this region for generations. Surfrider urges NOAA to designate the new sanctuary as the Chumash Heritage National Marine Sanctuary consistent with the nomination the agency formally accepted in 2015.” 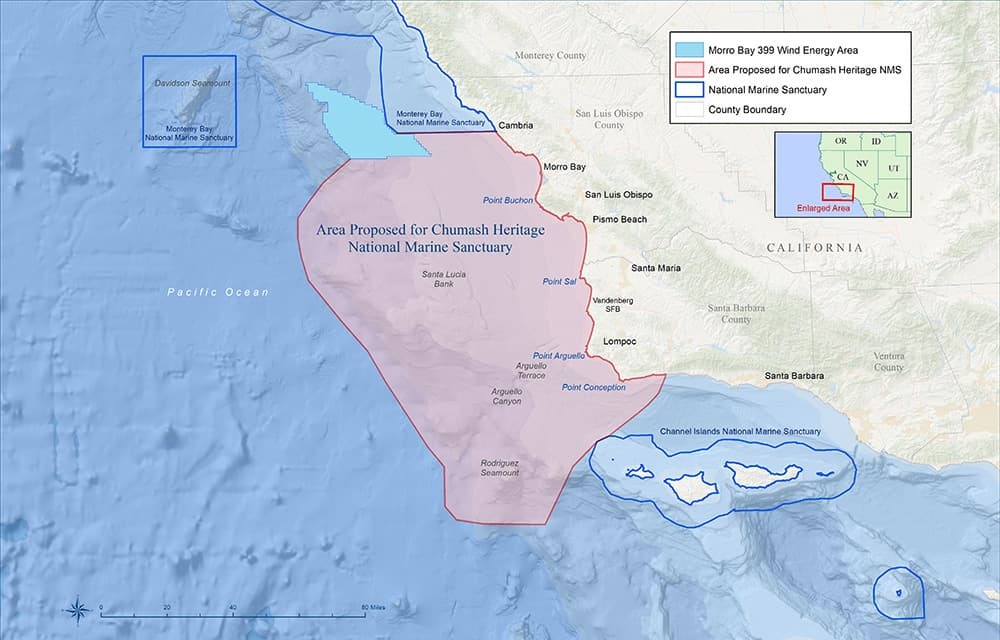 The waters off Central California are some of the most productive, culturally significant, and biologically diverse on the West Coast. Significant features include Chumash sacred sites, feeding grounds for 13 species of whales and dolphins, major upwelling processes, sea otter population, thriving kelp forests, world class fish diversity, pinniped spawning areas – the list goes on and on. Yet, these invaluable resources are highly vulnerable to human impacts, including potential offshore drilling and other harmful activities.

For these reasons and more, the Northern Chumash Tribal Council along with Surfrider’s San Luis Obispo Chapter, the Sierra Club and other partners nominated the Chumash Heritage National Marine Sanctuary (CHNMS) in 2015 to become a national marine sanctuary. The area proposed stretches from Santa Rosa Creek in Cambria to the Gaviota Creek in Santa Barbara, protecting marine habitat along some 140 miles of coastline. This would be the first sanctuary to focus on indigenous culture and history as a primary core value along with protection of ocean habitat.

“This is a great example of how local communities can work with federal and state partners to protect vital stretches of coastal and marine waters,” said Carol Georgi with the Surfrider Foundation San Luis Obispo Chapter. “The partnerships and community engagement for this designation also open the door for more coastal preservation and opportunities locally and hopefully on a bigger scale,” said Melanie MacDowell, chair of the Surfrider Foundation San Luis Obispo Chapter.

In 2015, National Oceanic and Atmospheric Administration (NOAA) accepted the nomination and added the Chumash Heritage National Marine Sanctuary to the inventory of areas that may become a sanctuary. In 2020, the Director of the Office of National Marine Sanctuaries (ONMS) determined that the Chumash Heritage nomination shall remain on the inventory for an additional five years, until October 5, 2025.

Since 2015, the Northern Chumash Tribal Council along with many local, regional and national partners have pushed NOAA to move forward with the designation. The proposal is supported by numerous community groups, businesses, and elected officials including Rep. Salud Carbajal (CA-24), Sen. Dianne Feinstein (CA), and Senator Alex Padilla (CA).

Your help is needed to support the establishment of the Chumash Heritage National Marine Sanctuary!

NOAA is inviting public comments to help inform the development of an environmental impact statement related to designating this area as a national marine sanctuary. These public comments will assist the agency in consideration of boundaries, regulations, and a management plan. This scoping process will also inform how NOAA will coordinate with federal, state, or local agencies, as well as the Northern Chumash Tribal Council.

Comments are due by January 31, 2022. Please go to the Federal eRulemaking Portal and enter “NOAA-NOS-2021-0080” in the Search box. See suggested talking points below.

For more information on the review process for the Chumash Heritage National Marine Sanctuary, go to https://sanctuaries.noaa.gov/chumash-heritage/