Offshore Drilling: So What Happens Now?

A final decision on the Trump administration’s offshore drilling proposal is at least a year away. Here’s what you can do right now to defend your coastline from new oil rigs!

Earlier this year, the Trump administration dropped a bombshell when it announced plans to expand offshore oil drilling to virtually every U.S. coastline. While an announcement on drilling had been expected, the extreme nature of the proposal - over 90% of U.S. waters targeted for oil and gas development - was stunning in both its scale and degree to which it was out of touch with the rest of the country.

The blowback against the proposal was both swift and loud. Hundreds of communities quickly registered their disapproval as protests sprang up from coast to coast. Thousands of citizens traveled to state capitals to attend the federal government’s hastily organized public meetings. And, during the requisite 60-day public comment period, over 1.6 million Americans submitted comments to the Department of Interior, with the vast majority expressing opposition to the drilling proposal.

So now that the public comment period is over, what happens next?

The short answer is that a final decision on offshore drilling is not expected for at least year. Federal law requires that the Department of Interior follow a deliberative process before approving new drilling (see graphic below). This includes conducting an extensive scientific review of potential impacts, as well as providing multiple opportunities for the public to provide feedback. For those of us who want to stop new offshore drilling, this is good news indeed. 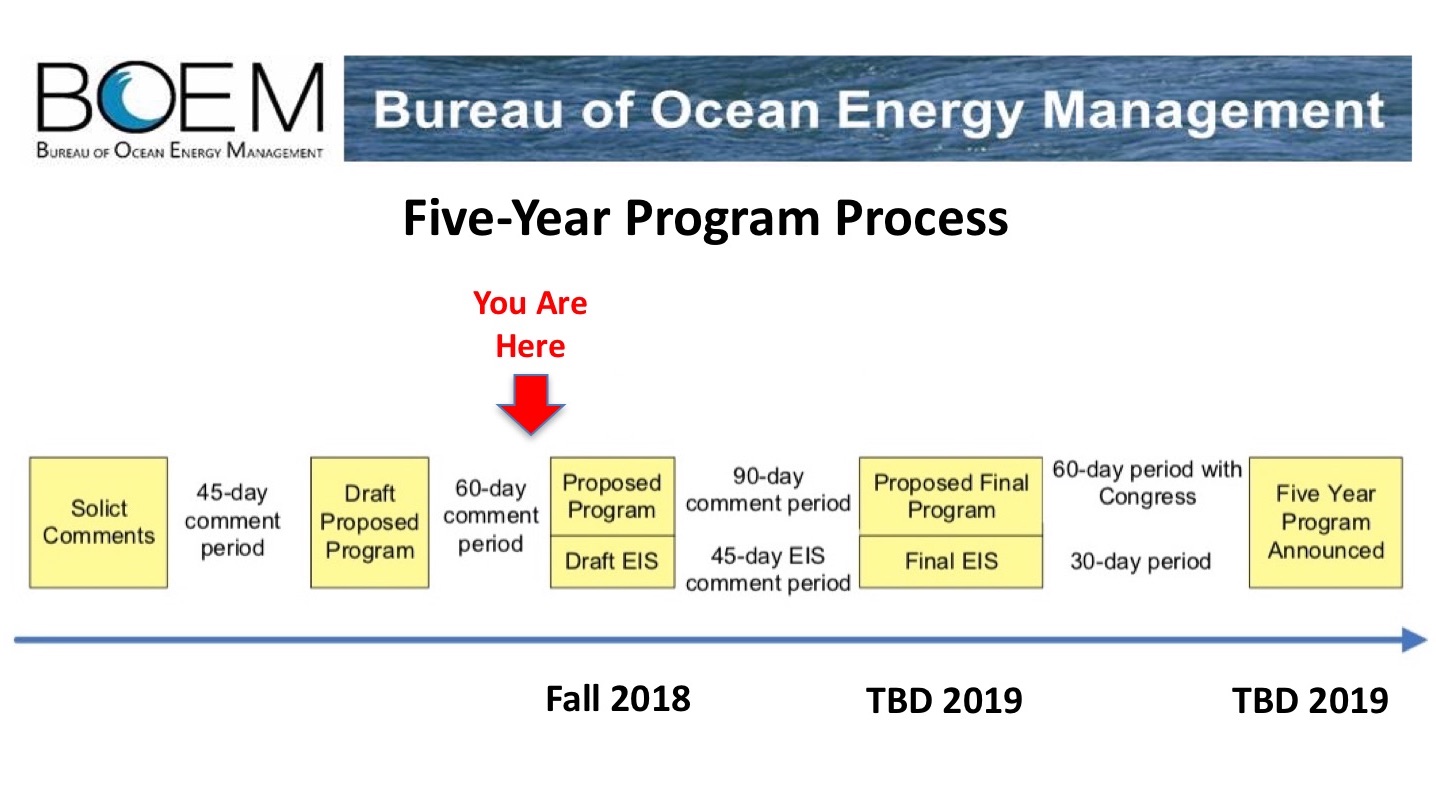 The next official step in the process will happen this fall when the Department of Interior releases the “Proposed Program,” which is the second draft of the offshore drilling plan, along with the draft Environmental Impact Statement (EIS). This will initiate a 90-day public comment period and another round of public meetings in affected communities.

But you don't need to wait until then to fight the administration’s plans for offshore drilling. On the contrary, now is the time to speak out so we can remove as many regions of the country from the next draft of the offshore drilling plan!

Here are 4 ways to take action against new offshore drilling

2) Contact your members of Congress Senate and House members are key targets to compel the administration to cancel plans for new offshore drilling. Please complete this action alert or call your representatives today to urge them to oppose new oil and gas development off our coasts.

3) Grow the business coalition against offshore drilling. Offshore drilling threatens our ocean recreation, tourism, and fishing industries that contribute over $100 billion to our nation's economy. That's why businesses are a key voice to oppose new drilling. Please ask local businesses to sign the business petition so we can engage them in the movement!

For more resources please see below

In addition, we urge you to watch our recent Facebook Live broadcast, discussing the latest offshore drilling news, campaign updates, and ways you can get involved!