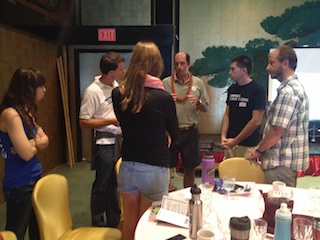 Conference keynote speaker Gary Gill, Deputy Director of the Department of Health, led off the first day of the Conference, sharing his interest in efforts such as preventing polluted runoff and stopping wastewater seeping into the ocean. For example, Gary wants to see each county (aka island) have a storm water permit, outlining pollution limits and programs to control it. Many activists connected with Gary (pictured at right, wearing lei and tan shirt, talking to activists like James Kuriyama, Vice-Chair of the Hilo Chapter, in black shirt) after his talk, and at lunch, to brainstorm on ways to collaborate. 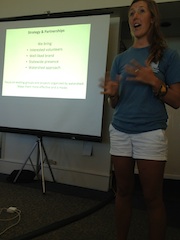 OFG was a topic for the second day, and Oahu Chapter OFG Chair Annie Lovell co-presented with national OFG Coordinator Paul Herzog. Paul covered the basics and some before/after pictures. Annie (pictured at left) followed by explaining the value of launching a program in partnership with other non-profits and private sector professionals doing similar work.

The day before the Conference, Oahu OFG activits held a meeting with two such entities: non-profit, Malama Maunalua (MM), and Roth Ecological Design, in the private sector (and also has a new non-profit professional training arm). Both provided slides used in the OFG presentation, which made it easier to explain their work. For instance, one slide mentioned Roth Ecological leading an OFG-type community hands-on workday in late September 2013 - an opportunity to see how a prospective partner conducts trainings and applies CPR: Conservation, Permeability and Retention. 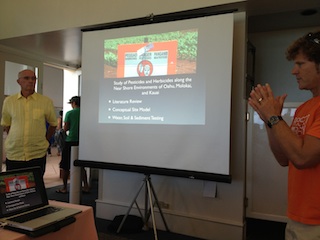 A new program to test water for pesticides was presented by Kauai Chapter activist Carl Berg and Surfrider national Environmental Director Chad Nelsen (at right, Carl in yellow and Chad in orange). Surfrider chapters have, for decades, been doing the important work of testing water for bacteria. But increasingly, agricultural is a source of runoff - from big plantations and multi-national seed testing farms (testing genetically modified organisms, or GMO).

Carl helped to net a big grant for the testing, which will used to hire a professional firm. This program can help connect the problem and the source of the pollution. OFG criteria - no chemicals, slow/spread/sink water to prevent runoff - can be expanded to farms: Ocean Friendly Farms. Another key area to target is sediment (soil) runoff from barren farm fields, which can cover and kill corral reefs. 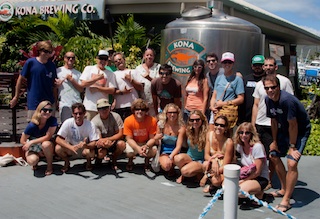 Right after the Conference finished, a big group headed on to an OFG field trip (pictured at left), looking at MM's rain gardens (essentially, OFGs). Big Mahalo to Kauai Surfrider activist, Rebecca Villegas, works for Kona Brewing Company and hooked us up with a tasty free lunch! 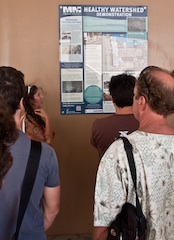 Then we checked out Kona's new rainwater tank, converting an old beer brewing tank to capture water for use on plants during the dry months. It's one of several best management practices (BMPs) installed by MM in the shopping mall.

MM intern, Sarah Harris (at right, standing next to the poster), led the group through a tour of several rain gardens. In addition to directing runoff from building roofs into rain gardens, MM also installed filters in parking lots. These filters need to be replaced every so often. The bulk of polluted runoff is flowing off of parking lots and roads, carrying with it oil, metals, etc. 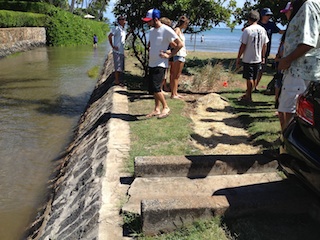 We next checked out an MM rain garden at a beach park (at left). Runoff from parking lots is typically directed into a concrete channel, which dumps into a creek that flows directly into the ocean.

This scenario is what is pictured, at left, at the beach park. MM will be cutting the channel (near the car in the picture), directing water into the rain garden: cheap, easy and effective. Big mahalo to MM's Pam Weiant for setting up the tour and wanting to explore partnering! 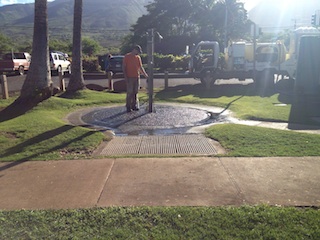 Speaking of beach parks, the Maui Chapter is interested in directing shower water and stormwater away from drains that are piped to the ocean (pictured at right). A West Maui Watershed organization has created a stormwater rain garden, while an outrigger canoe club has directed their shower runoff to a small patch of bananas and tea plants. The West Maui watershed organizaton wants to partner with Surfrider on a rain garden.

From a policy perspective, Surfrider Hawaii Regional Manager Stuart Coleman and Maui OFG Chair Josh Hamlin are interested in setting up meetings with agencies such as the Parks Department to discuss partnering to install OFGs could help train the Department in design, installation and maintenance - and possibly make OFGs the norm for retrofits and new development.

Interestingly, the Ritz Carlton Hotel on Maui is home to an awesome small organic farm that supplies food to the Hotel restaurant and also composts most of the food waste. Frank the farmer has created a great example non-GMO farming and of an OFG (at left): it just needs an OFG yard sign! 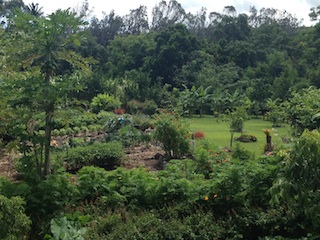 The farm is partially an effort of the Ambassadors of the Environment, an organization started by Jean-Michel Cousteau and managed at the Ritz by Amanda Gravitte. Tours of the farm are led by a Ritz chef every Monday at 10:30, and a farm-fresh smoothie may be offered at the end!

The Maui Chapter is also part of a lawsuit against Maui County for directing treated wastewater into injection wells that seem to work there way down into lava tubes (natural formations) and to the ocean. Water quality testing has revealed high bacteria counts. Sewage discharge is believed to be a contributor to the decline of corral reefs. 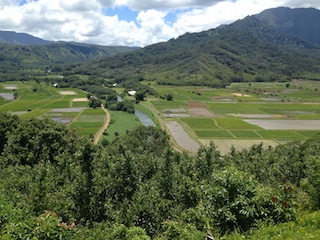 Amongst the natural water-cleansing tools available to us is constructed wetlands. Wetlands have been (re)created in Kauai's mountain lowlands along the north shore (at right). They serve a dual purpose of growing taro - used for making poi - and habitat for migrating birds.

Creating OFGs, directing runoff from hard surfaces into OFGs or filters, constructing wetlands, and re-using wastewater are all part of Surfrider's program, Know Your H2O. Having an integrated approach, with programs that scale from small properties to a regional scale, helps make Surfrider chapters an entity with which agencies and non-profits want to partner.