Oregon Congressional and State Leaders Speak Out Against Offshore Drilling

The Surfrider Foundation hosted a press conference for federal and state leaders this week at the Oregon Coastal Caucus Economic Summit to voice their opposition to the federal proposal to open Oregon’s coast to drilling for the first time since 1964. Lawmakers at the event provided updates on bipartisan efforts to protect Oregon’s coastal economy, including plans to strengthen Oregon’s moratorium on oil and gas drilling in its Territorial Sea in the state legislature, and work with Washington and California to permanently ban offshore drilling in U.S. waters through the West Coast Ocean Protection Act. 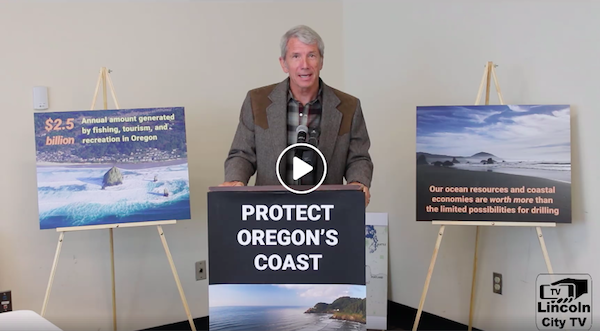 The event was a response to the Draft Proposed Program released in January for offshore oil and gas lease sales for the years 2019 to 2024. The proposal would open 90% of U.S. waters — including Oregon’s entire coast — to oil and gas drilling. In February, 16 Northwest members of Congress sent a bipartisan letter to Secretary Zinke calling the proposed drilling a “waste of time, government resources and taxpayer money.”

Oregonians from all over the state have voiced their concerns about offshore drilling, submitting more than 30,000 comments on the Draft Proposed Program. The cities of Newport, Toledo, Port Orford, Gold Beach, Lincoln City, and Yachats, the Siletz Tribal Council, and the ports of Newport and Toledo have all passed resolutions against offshore drilling.

According to the National Ocean Economics Program, Oregon’s ocean economy is worth $2.5 billion annually, and supports 33,000 jobs. More than 25,000 of those jobs are in tourism, recreation and fishing, the sectors that stand to lose the most from an oil spill. Oregonians, and the rest of the nation, will learn whether their concerns have been heard when the Department of the Interior releases a new Proposed Program for 2019-2024 lease sales following environmental reviews. That will trigger another public comment period. The final plan is expected by 2019, with lease sales to follow.

Congressman Kurt Schrader (Video): “Nothing could be more dangerous or worse for our economy and frankly worse for the coast of Oregon than to have offshore drilling for oil or natural gas. This is an iconic part of the country and Oregonians have, as have Washingtonians and Californians, spoken loud and clearly that we do not want oil and gas drilling off of our coast.”

Congresswoman Suzanne Bonamici (Video): “This push for offshore oil drilling is absolutely appalling and is taking us in the wrong direction. When we drill, we spill and we know that history of oil drilling in our oceans. It's a risk to the health of our oceans and represents a threat to the blue economy of commercial and recreational fishing, tourism, coastal recreation.”

Senator Jeff Merkley: “Oregon's beautiful coast is one of the richest marine ecosystems in the world. Yet the Trump administration wants to put our coast at risk with its reckless effort to allow drilling along more than 90 percent of our nation’s outer continental shelf. That is why last year, I joined my West Coast colleagues to introduce the West Coast Ocean Protection Act, which would permanently ban offshore drilling in Oregon, Washington, and California. I will continue to work with Surfrider and my Oregon colleagues to do everything I can to stop the administration from threatening our coastal economies, resources and ecosystems, and our coastlines.”

Senator Ron Wyden: “As I’ve told Ryan Zinke at a Senate hearing, Oregonians don’t want to see oil derricks on the horizon when we look out at Haystack Rock. This shameless agenda to prop up oil and gas industries by recklessly opening nearly the entire United States’ coast to drilling would hurt coastal economies and go completely against the wishes of local communities. The hardworking Oregonians who live and work on our coast should not have their economic well-being threatened for the benefit of oil executives’ profits.”

State Senator Arnie Roblan (Video): “Our ocean is supported by fishermen and a broad coalition of ocean users hoping to make Oregon a pioneer in a sustainable healthy ocean economy.  Drilling for oil and gas off our costs will certainly jeopardize coastal economies and put vulnerable communities at risk—by threatening our public beaches, commercial fisheries, tourism and recreational economies.”

State Representative David Gomberg (Video): “Offshore oil drilling and exploration off the Oregon coast? Myself and fellow Coastal Caucus members are standing up today as we did at the Capitol in February to say not here, not now, not ever.”

State Representative David Brock Smith (Video): “Our ocean resources and their coastal economies are worth more than the limited possibilities off the Oregon Coast for drilling.”

Take action and stop new offshore drilling or support our Surfrider volunteer network at Surfrider.org/support-surfrider to help protect the ocean, waves and beaches for the future.