The work of numerous activists with Surfrider's San Diego County Chapter over a period of many years paid off on November 18, 2014 when the San Diego City Council voted unanimously to approve Pure Water San Diego, a program which will significantly reduce wastewater discharges to the ocean and produce 83 million gallons per day (mgd) of high quality drinking water.

A significant milestone in this multi-year campaign was completion of a Recycled Water Study in July 2012.  This study was initiated in August 2009 by the City of San Diego, along with key stakeholders, as part of a Cooperative Agreement between the City, the San Diego County Chapter of Surfrider Foundation, and San Diego Coastkeeper. The Study served as a guidance document in helping policy leaders make important decisions regarding water reuse and the region’s water and wastewater infrastructure.  Five Integrated Reuse Alternatives were developed based on an extensive, interactive Stakeholder process. Each Alternative included 83 mgd of new indirect potable reuse.

Another significant milestone was the construction and operation of a 1 mgd Water Purification Demonstration Project. From 2009 to 2013, the City of San Diego embarked on a demonstration project to determine whether advanced water purification technology could provide a local and safe drinking water supply for San Diego. The Water Purification Demonstration Project evaluated the feasibility of a full-scale reservoir augmentation project, where purified water could be blended with imported water supplies in the San Vicente Reservoir before going to a standard drinking water treatment plant. The project's operational testing and monitoring verified the water purification process consistently produces water that meets all state and federal drinking water standards. The purified water is similar in quality to distilled water. 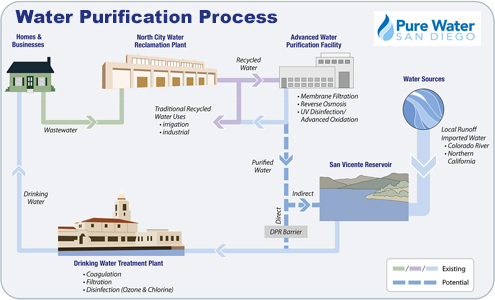 Based on the results of the Recycled Water Study and the Water Purification Demonstration Project, the City of San Diego developed Pure Water San Diego, a 20-year program to implement the recommendations of the Water Reuse Study.  Pure Water San Diego was approved by a unanimous vote of the San Diego City Council on November 18, 2014.  The approval  covered two items - authorization to submit a renewal application for a modified National Pollutant Discharge Elimination System (NPDES) Permit for the Point Loma Wastewater Treatment Plant and authorization to enter into a Cooperative Agreement between the City of San Diego and San Diego Coastkeeper, Surfrider Foundation San Diego County Chapter, Coastal Environmental Rights Foundation, and the San Diego Audubon Society in support of the Point Loma NPDES Permit and Pure Water San Diego. The permit application includes the concept of “secondary equivalency”, which will achieve the same mass emission limits of suspended solids as would be allowed under secondary treatment, by reducing the wastewater flows going to Pt. Loma.  Both the permit application and the Cooperative Agreement contain a commitment for implementation of Pure Water San Diego, in stages, by specified dates and treatment/diversion amounts.  The Agreement also commits the environmental NGOs to support the Pure Water program through participation in public education and advocacy efforts.

Surfrider Foundation San Diego County Chapter and our environmental partners are very proud that years of work by numerous activists to reduce wastewater flows to the ocean and produce a new, local, sustainable drinking water source have paid off with a commitment to implement this program. The chapter will continue to be involved with this issue to urge the City to expedite implementation of Pure Water.  They will also advocate for implementation of similar potable reuse programs by other cities and water/wastewater agencies in San Diego County.