The New York Times reported this week that since Superstorm Sandy hit a month ago, hundreds of millions of gallons of raw and partly raw sewage from crippled treatment plants have flowed into waterways in New York and New Jersey, exposing flaws in the region’s wastewater infrastructure that will take billions of dollars to fix.  Read the full article online here if you have the stomach for it.

While most of the sewage treatment plants in the area are once again running properly, there are still a few that are still not yet treating 100% of their wastewater in NJ and on the south shore of Long Island.  In addition to the public health threat that still exists in the bays from the continuing sewage discharge, residents across the region are faced with the dangerous and extremely unpleasant task of tearing out and cleaning up damage to homes that were once flooded by sewage-tainted flood waters.

Information on how badly Atlantic beaches are affected by the pollution has proven very difficult to come by.  Beach water testing in this region is nearly non-existent during the colder winter months. The Surfrider Chapters in NYC and NJ, however, are doing their best to keep local surfers informed of the risks and encouraging use of Surfrider's ocean illness reporting site available here. 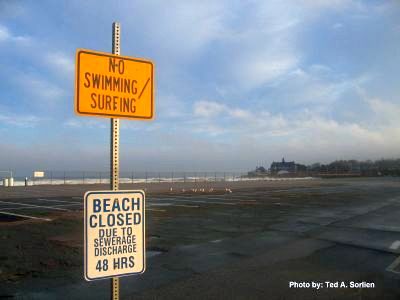