After three years of working with a coalition of local organizations, the New York City Chapter of the Surfrider Foundation is celebrating the passage of the “Skip the Stuff” bill in NYC, by a vote of 43-7 on January 19, 2023. Mayor Eric Adams signed the bill on February 1, 2023.

The bill is pretty straightforward: it seeks to change the expectations of takeout and delivery food customers. Instead of expecting to receive extra items like napkins, utensils, and condiments, under Skip the Stuff, customers will expect to not receive those items unless they specifically request them.

This will save restaurants money, as nationally, restaurants spend about $20 billion per year on such items. It also includes protections for restaurants using third-party food delivery providers, warnings for first-time violations, and education requirements to inform businesses and consumers about the new rules. For these reasons, the largest restaurant association in the city, the NYC Hospitality Alliance, supported the bill.

NYC Chapter volunteers attended a rally at City Hall, testified at two hearings, shared an action alert, educated the public at tabling events, and sent postcards to elected officials from members of the public. Surfrider staff Matt Gove led the ReusableNYC coalition’s efforts to get the bill passed for three years, including a last second, painful loss under the DeBlasio Administration in 2021. 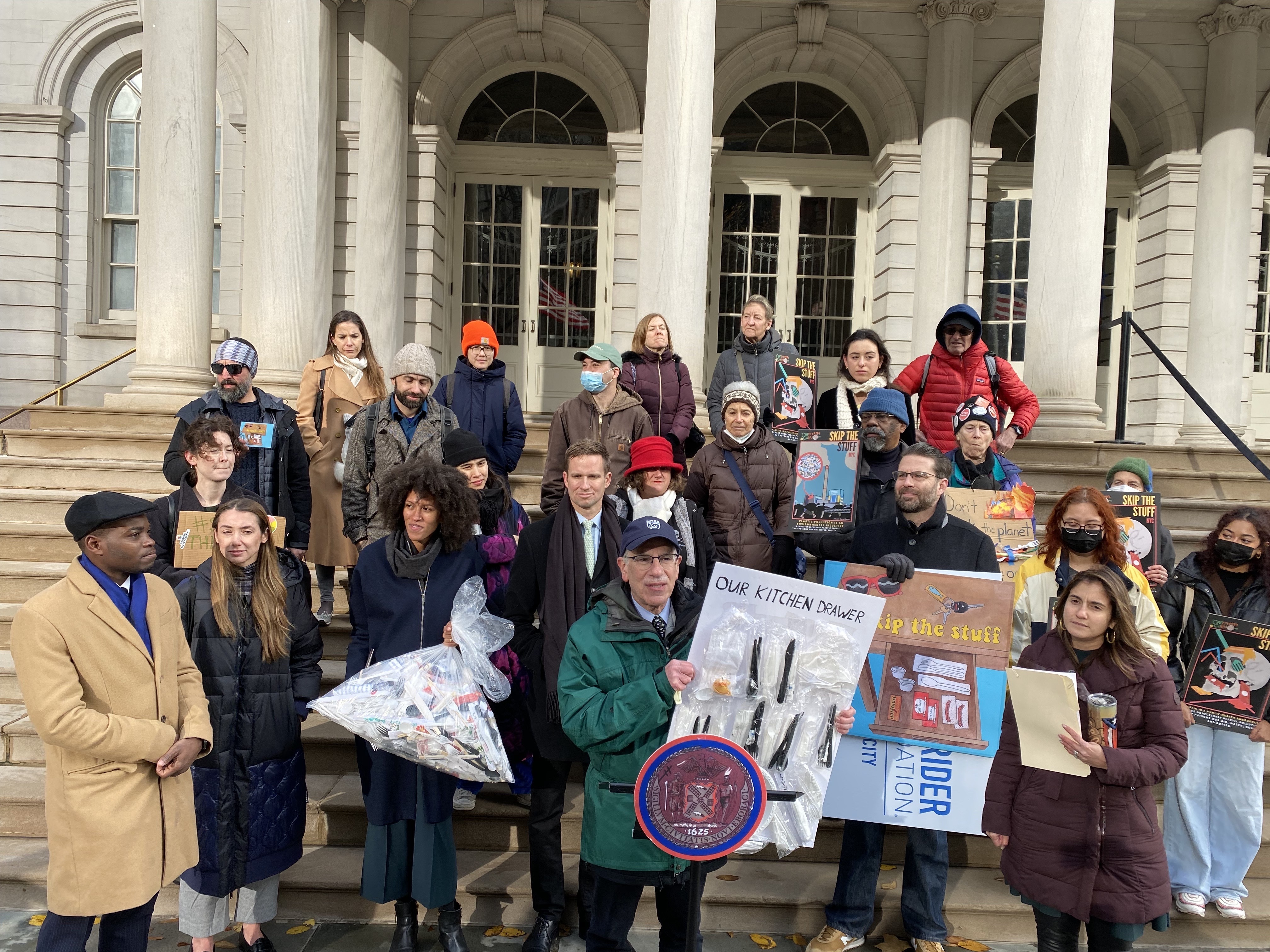 Reducing plastic usage is an environmental justice issue. Nearly 80% of plastic incinerators are located in low-income communities and/or communities of color and the pollutant fumes produced by incinerating plastic have toxic effects when inhaled. Waste management infrastructure is also disproportionately located in these communities.

If passed, Skip the Stuff would reduce the amount of disposable plastic sent to New York’s landfills and incinerators. New York City spends at least $42 million per year on waste management fees for just single-use disposable foodware. In addition, increased use in delivery apps and the number of takeout orders have more than doubled since the onset of COVID-19, exacerbating the amount of waste produced.

Skip the Stuff helps combat the plastic pollution crisis. Plastic particles are now found in our air, drinking water, soil, oceans, lakes, rivers and our bodies. This is a health crisis for our planet and everything that lives here, including humans. We need to reduce our usage of plastic to protect human health.

This bill honors customer choice. Nearly all – 98% – of takeout and delivery orders are eaten at home or in an office, where reusable utensils are available, and preferred. Every New Yorker has a drawer crammed with plastic utensils, chopsticks, and ketchup and soy sauce packets, which are often included with a meal even when specifically requested not to be.

The NYC Chapter of the Surfrider Foundation does a lot of beach cleanups, mostly in the Rockaways, and the items addressed in the bill are always some of the most commonly found. For example, the Chapter held 17 beach cleanups in 2022, and in total found 1,042 plastic straws/stirrers, 270 plastic utensils, 600 napkins, and 1,600 plastic wrappers, with some portion of that 1,600 being condiment packets. Lisa Salomon, Chapter Coordinator of the NYC Chapter cited all of these cleanup statistics as she testified on the bill, pictured below. 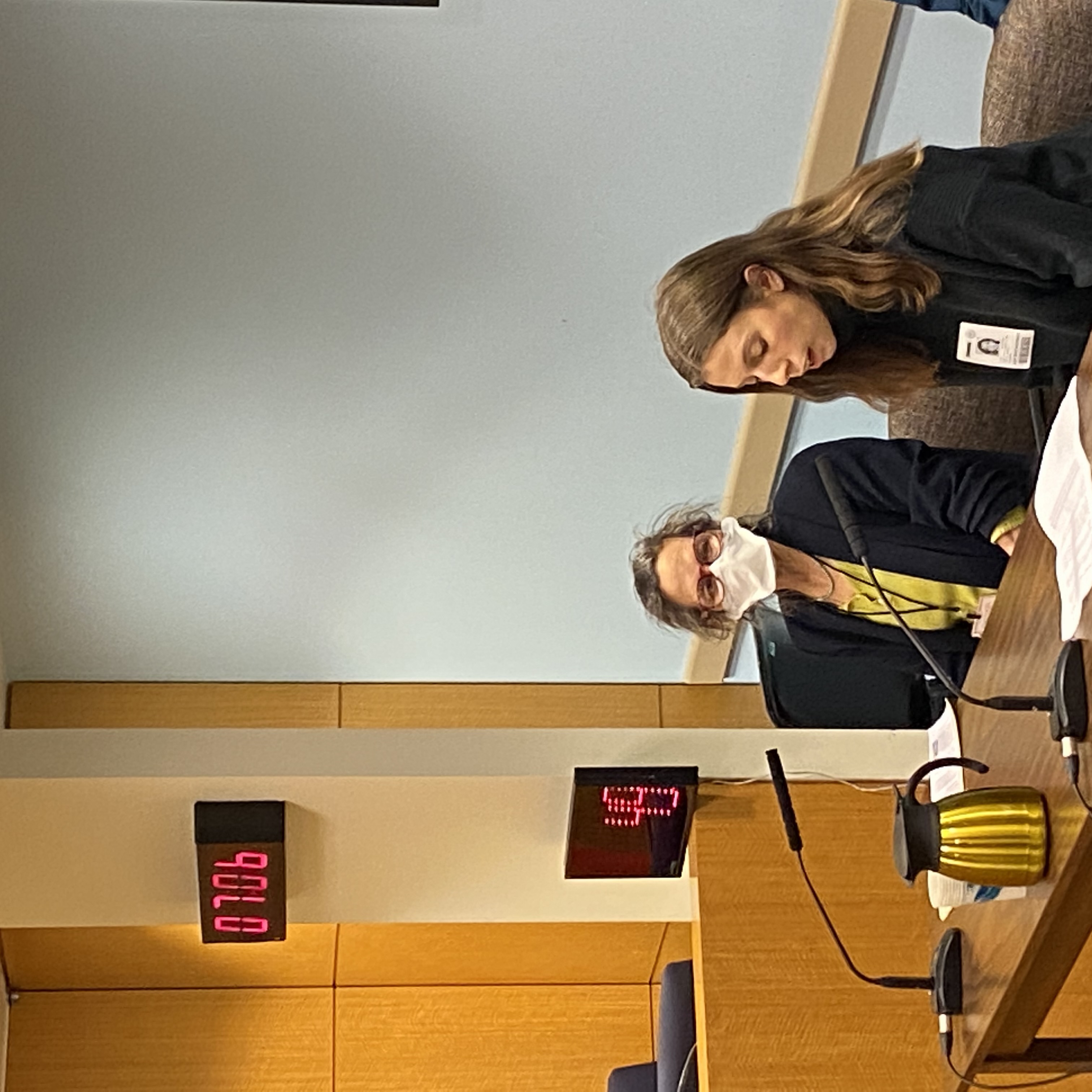