Something to be thankful for at Cowell’s Beach, Santa Cruz

Water quality results determined during this past summer indicate improved conditions at the popular Cowells Beach in downtown Santa Cruz. High bacteria counts have landed Cowells Beach on Heal the Bay's top ten dirtiest beaches in California for the past 6 years, and it has had the dubious honor of being ranked #1 Beach Bummer for the last three.

Following the recommendations of the Cowell Beach Working Group, the City of Santa Cruz installed screening to reduce gull and pigeon roosting under the wharf in August 2016, as birds dropping feces directly into the surf were identified as potentially major contributors of the bacteria pollution. And it would seem that management strategy was a resounding success, as reported in the Santa Cruz Sentinel. 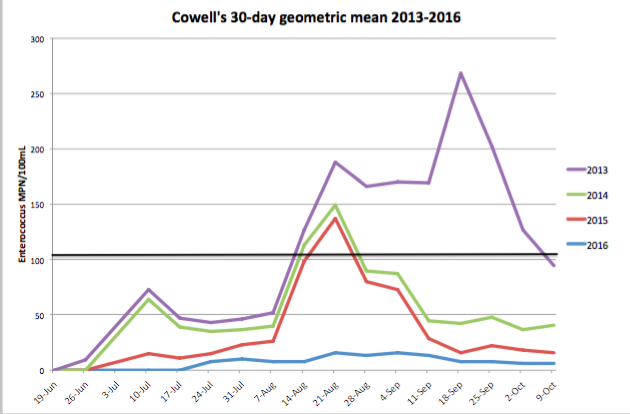 To learn more about the history of the pollution problem at Cowell's Beach and how the Santa Cruz Chapter has supported efforts to solve this pollution problem by educating the public and investigaing the sources of pollution, view this great poster developed by their BWTF Coordinator, Sam Blakesley, while earning his BS at University of California, Santa Cruz.  In the Bowel of Cowell's:  A Geospatial Analysis of Fecal Indicator Bacteria Causing Water Quality Impairment at Cowell Beach - Santa cruz, CA.

In addition to investigating bacterial conditions at the Wharf, Cowell's Beach and the surrounding surf breaks, the Santa Cruz Chapter through the efforts of their previous BWTF coordinator Danny Wright (while earning his MS at California State University) and current coordinator Sam Blakesley have conducted a study of the San Lorenzo River watershed which discharges at the adjacent Main Beach.  The intent of this comprehensive study was to assess land-based sources of water pollution in the San Lorenzo River and identify how these terrestrial sources contribute to the water quality problems in the Cowell's/San Lorenzo Rivermouth region. The San Lorenzo River Watershed Study was an excellent opportunity for the Santa Cruz Chapter's citizen science program to collaborate and engage with other non-profits, government agencies, and regional educational institutions to work towards environmental protection and improving water quality conditions at the beach.   Read the full report here. 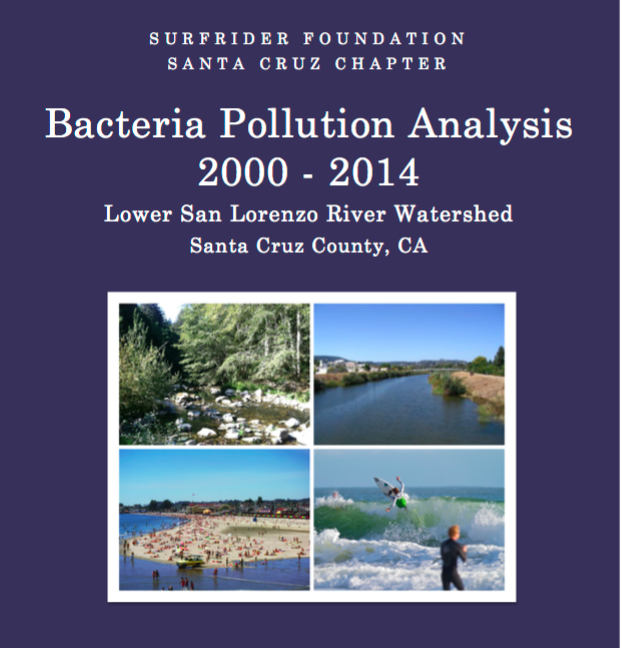