Recently, Surfrider Foundation filed a complaint against the City of Dana Point for enacting a bogus Urgency Ordinance that provided for locked gates and restricted hours of access at the Mid-Strands Vista beach access way at the Strands Beach in Dana Point Headlands. This access way happens to be the most direct and most utilized way to get to the beach at Dana Point Strands. This is especially true for surfers since the access is from the parking lot to the best part of the surf break.

In the Surfrider Complaint for Declaratory and Injunctive Relief, Surfrider challenges the unlawful restriction of beach access within the state's coastal zone. Not only does the restriction of access contravene California's Coastal Act and Section 4 of Article X of the California Constitution, but the Urgency Ordinance and excessive use of local police power exercised by the City was entirely unwarranted.

On March 22, 2010, the Dana Point City Council voted to approve the Urgency Ordinance declaring the existence of a Public Nuisance condition at the Strand Vista Park and residential Dana Point Headlands Development despite the utter lack of evidentiary basis for such a determination. As our complaint states:

“This case is really about a wealthy developer that has recruited the City to provide his undeveloped site with private security…and to provide his development with a semi-private, exclusive beach - boosting the value of his multi-million dollar lots at the expense of the public. The developer is circumventing state mandated permit requirements to obtain a fully-gated residential community in derogation of the public's right to access beaches held in trust for the benefit of the public by the State of California. This case is not about nuisance abatement.”


The Surfrider case has been consolidated with the City's suit against the California Coastal Commission for the Commission's denial of the appropriate permits for the gates and restrictive hours of access. The consolidated cases will be heard in the Superior Court of San Diego in the near future. The decision will likely be instructive as to the extent of the public's right of access to the beach in California and as to the California Coastal Commission's jurisdiction to protect this right. 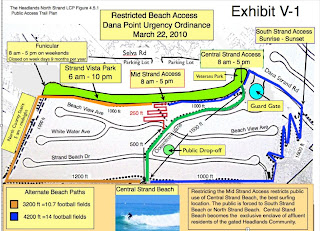