In an effort to protect the nation’s marine waters from the dangers posed by chemical oil dispersants, Surfrider Foundation, Center for Biological Diversity and Pacific Environment filed suit today challenging the U.S. Environmental Protection Agency and U.S. Coast Guard’s authorization of chemical dispersants for use in response to offshore oil spills.  These agencies have failed to analyze the effects of these chemical dispersants in the ocean environment when used after an oil spill.  Specifically, these agencies failed to issue a consultation on whether the chemicals would destroy or adversely modify critical habitat of endangered species under the Endangered Species Act, 16 USC §1536. 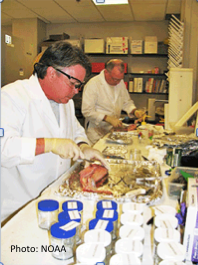 During the 2010 Deepwater Horizon oil spill in the Gulf, more than 2 million gallons of dispersants were used.  The environmental effects of these dispersants were unknown, particularly at such great depths and volumes.  Since the Deepwater Horizon spill, scientists have found that sulfate compounds commonly used in dispersants were sequestered in deep plumes and did not significantly biodegrade.  There is fear that these dispersants will be dissipated into the water column and become part of the food web.  Research has documented that oil carbon was incorporated into the planktonic food web during the Deepwater Horizon spill and transferred from small zooplankton to the larger zooplankton eating them.  Chemicals found in the listed dispersants, like Corexit, are associated with carcinogens, endocrine disruptors, rashes, burns, eye irritation, respiratory toxins, and kidney toxins.

The EPA and Coast Guard have failed to protect our coastal waters and ecosystems by not analyzing the likelihood of jeopardy on listed  endangered species or adversely affect critical habitat.  This is a violation of the Endangered Species Act.  Specifically in California, these agencies should consult with the Department of Fish & Game and inform the California Dispersant Plan.  The Plaintiffs demand to know more about the degree of toxicity in Corexit and other dispersants and how it affects our coastal waters/marine life when used.  If proven too toxic (as it has been in the United Kingdom), it should be taken off the National Contingency Plan schedule of available oil spill responses.

“From Santa Barbara to the Exxon Valdez and the Deepwater Horizon, we’ve seen the destruction that oil spills leave in their wake,” said CBD’s lead counsel Deirdre McDonnell. “We shouldn’t add insult to injury by using dispersants that could have long-term effects on species already fighting for survival.”

Surfrider Foundation is also working to protect our coastal waters from the damages of Deepwater Horizon spill in the Gulf of Mexico.  Surfrider Foundation grassroots Chapters in Florida are conducting tests to detect damage from the oil spill and use of toxic dispersants in coastal waters and sandy beaches along the Emerald Coast.  The State of the Beach report findings were published this week, concluding that Corexit appears to be making it tougher for microbes to digest the oil.  The dispersed oil residue was found present in the coastal recreation areas and cause accelerated rates of absorption of the toxins into the skin.