The Next Great Battle

Today, April 20, marks the five-year anniversary of the BP Deepwater Horizon oil spill. Despite the catastrophic effects this spill had – and continues to have – on the Gulf of Mexico ecosystem and coastal communities, the federal government is still attempting to introduce new offshore drilling along the Mid- and South Atlantic. Surfrider's Environmental Director, Pete Stauffer, writes about “The Next Great Battle” in the Spring 2015 issue of The Drop, Surfrider's new biannual magazine offered as a new benefit to members who contribute $50 or more annually. Click on the image to read a full version of the article, then join today for $50 to receive the Fall 2015 issue of The Drop. 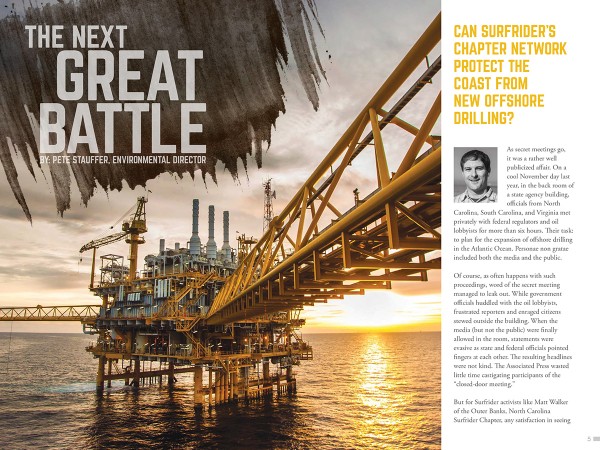 The following is an excerpt from the article, “The Next Great Battle,” which first appeard in the Spring 2015 issue of The Drop, Surfrider's new biannual magazine.

As secret meetings go,  it was a rather well publicized affair. On a cool November day last year, in the back room of a state agency building, officials from North Carolina, South Carolina, and Virginia met privately with federal regulators and oil lobbyists for more than six hours. Their task: to plan for the expansion of offshore drilling in the Atlantic Ocean. Personae non gratae included both the media and the public.

Of course, as often happens with such proceedings, word of the secret meeting managed to leak out. While government officials huddled with the oil lobbyists, frustrated reporters and enraged citizens stewed outside the building. When the media (but not the public) were finally allowed in the room, statements were evasive as state and federal officials pointed fingers at each other. The resulting headlines were not kind. The Associated Press wasted little time castigating participants of the “closed-door meeting.”

But for Surfrider activists like Matt Walker of the Outer Banks, North Carolina Surfrider Chapter, any satisfaction in seeing the public reprimand was tempered by the larger threat that had been exposed.

“The rest of the country recognized what we’d been fearing for the past two years. That Governor McCrory’s frequent promises to open North Carolina to offshore drilling were not idle threats and we needed to take serous action before it was too late,” stated Matt.

The message was clear: the government was rolling out the red carpet for the oil industry. And, concerned citizens would need to make their voices heard.

The battle lines had been drawn, but the question remained. Just five years after the BP oil spill in the Gulf of Mexico, why are our government leaders cheerleading for offshore drilling in the Atlantic?

Next month marks the  anniversary of one of the worst environmental disasters in U.S. history. On April 20, 2010, tragedy struck the Gulf of Mexico when BP’s Deepwater Horizon rig exploded, killing 11 people and gushing oil for 87 days.

By the time the rig was finally capped, an estimated 4.9 million barrels of oil had spilled, causing unprecedented devastation to the Gulf’s marine ecosystem. The Center for Biological Diversity estimates the spill killed or harmed nearly 115,000 birds, sea turtles and marine mammals. But this was only the tip of the iceberg as oil penetrated every facet of the environment, including the seafloor, beaches, and wetlands that serve as nurseries for sea life. Now, five years later, scientists are just beginning to understand the extent of damage to this magnificent ecosystem.

Yet, the environmental impacts are only part of the story.

Click the image above or here to read the complete article. Then join today for $50 or more to receive the Fall 2015 issue of The Drop.