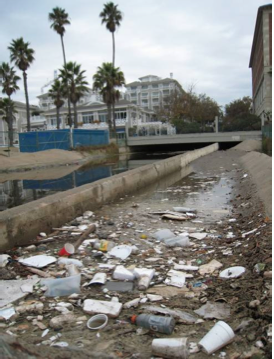 This year, Team Marine removed more than 75 pounds of trash from the Pico-Kenter storm drain, preventing a small portion from entering the ocean. The majority of the trash was plastic. This marks the fifth consecutive year that Team Marine has documented the flow of pollutants coming out of the storm drain and performed emergency clean ups.

Lighter rains caused two separate “gurgles” of the Pico-Kenter Storm drain, one on November 8 and a bigger one November 16.  The gurgles lubricated the drains, dislodging plastic litter that had accumulated in the dry season and carrying some of it onto the sand in front of Shutters and Casa Del Mar Hotels. Upon heavier rains the morning of October 29, the real “first flush” occurred, with water scouring a pathway through the sand to the ocean.  During the first flush, approximately eight months of stored plastic litter washed out into the Santa Monica Bay.

“Despite city bans on plastic grocery store bags and Styrofoam, we haven’t seen any major reduction over the years in the amount of plastic pieces flowing out of the storm drain,” said Edie Cote, co-captain of Team Marine.

Armed with supplies such as reusable gloves and buckets, Team Marine filled four 18 pound trash bags of debris. The bulk of the litter was composed of plastic materials, such as single-use Styrofoam cups, utensils, straws, bags, and cigarette butts.  An unidentified, beige “mystery foam” formed a blanket on top of the runoff leaving behind a frothy residue on the sand.

The ill effects of plastics are well known.  Up to 95% of floating ocean debris is composed of plastics, which have accumulated in all five major oceans killing marine life through ingestion and entanglement.  Team Marine is an organization at Santa Monica High School dedicated to sound research and environmental advocacy.  Team Marine encourages 1. People bring their own reusable accessories to stores and restaurants, 2. People dispose of their trash properly, 3. People refuse using single-use plastic items, 4. Schools to educate students about the magnitude of the plastics issue, and 5. The City to deploy more and better storm drain filters and screens to reduce plastic pollutants entering the ocean. 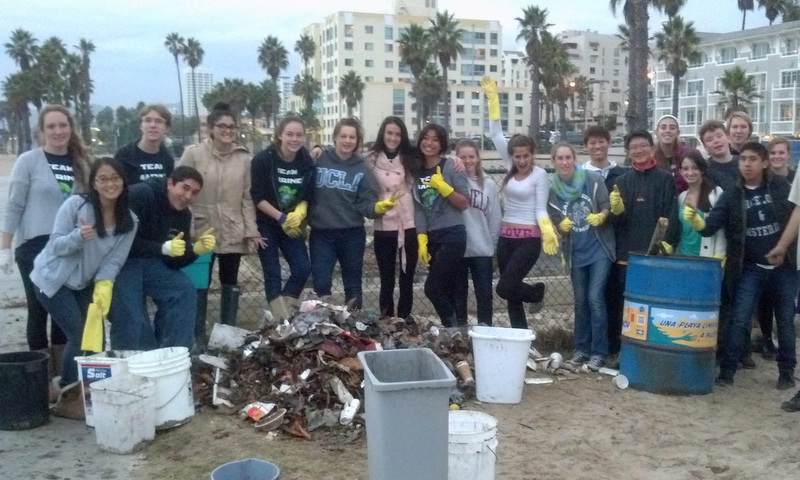 The Blue Water Task Force (BWTF), presented by Emergen-C Blue®, helps local chapters alert citizens and officials in their communities about water quality issues and works to implement solutions. As clean water becomes an increasingly scarce resource, Emergen-C Blue is committed to supporting, enhancing, and extending the efforts of the BWTF by donating 20 cents for every box sold to further the important work being done to improve water quality. For more information about Emergen-C Blue and the Emergen-C Fund, please visit myemergenc.com/fund .