The Trump administration is expected to unveil the new 5 Year Offshore Oil Drilling Plan as early as this week, after signing an executive order earlier this year to expand offshore oil drilling in U.S. waters. Expanded offshore oil drilling threatens recreation, tourism, fishing and other coastal industries, which provide over 1.4 million jobs and $95 billion GDP along the Atlantic coast alone. The executive order directed the Interior Department to develop a new five-year oil and gas leasing program to consider new areas for offshore drilling. The order also blocked the creation of new national marine sanctuaries and orders a review of all existing sanctuaries and marine monuments designated or expanded in the past ten years.

“Our ocean, waves and beaches are vital recreational, economic and ecological treasures to our coastal communities that will be polluted by new offshore oil drilling, regardless of whether or not there is a spill,” said Dr. Chad Nelsen, CEO of the Surfrider Foundation. “Without a massive mobilization by coastal communities around the country in opposition to new offshore drilling, our voice will be drowned out by the lobbying power of Big Oil in Washington, DC.”

New offshore drilling would threaten thousands of miles of coastline and billions in GDP, for a relatively small amount of oil. Ocean tourism and recreation, worth an estimated $100 billion annually nationwide, provides 12 times the amount of jobs to the U.S. economy, compared to offshore production. Even under the best-case scenario, America’s offshore oil reserves in the Atlantic and Pacific would provide only about 758 days, or 25 months supply of oil at our current rate of consumption, according to federal agency estimates.

“Tourism drives our local economy, and the approval of offshore drilling poses a huge threat to the livelihood and quality of life in our beach community,” said Nicole D.C. Kienlen, Tourism Director Bradley Beach, New Jersey. “The effects would be devastating on multiple levels.”

Even when there are no accidents, offshore oil drilling seriously pollutes our water and food supply at every stage. The ground penetration, the drilling, the rigs, and the transportation tankers all release toxic chemicals and leaked oil. The standard process of drilling releases thousands of gallons of polluted water into the ocean. High concentrations of metals have been found around drilling platforms in the Gulf of Mexico and have been shown to accumulate in fish, mussels and other seafood. 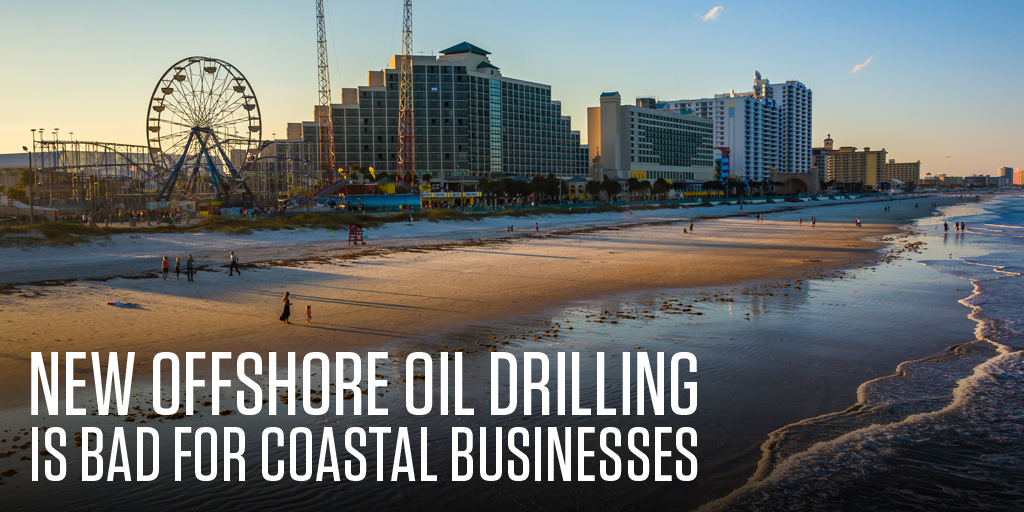 Fortunately, any attempt by the Trump Administration to revise the 2017-2022 Offshore Drilling Plan will require an extensive review process with multiple opportunities for public input. Surfrider’s grassroots network is both ready and motivated to stand up for the protection of our nation’s coastlines!

Last year, Surfrider chapters on the East Coast played an instrumental role in reversing the Obama administration’s plans to open the Atlantic to new oil drilling. Through raising awareness about the impacts of offshore drilling and building opposition from coastal businesses and communities, Surfrider and our partners prevailed in protecting the Atlantic. Now, we must rally once again to stop new oil rigs off our coasts!

Please join our campaign to stop new offshore drilling off U.S. coastlines. See below to learn how you can take action.