Well, he finally did it.  Today, President Trump withdrew from the Paris Agreement. The international accord, crafted by 195 countries, aims to reduce greenhouse gas emissions and establish adaptation plans to combat climate change.  President Trump spent last week in Europe at the G7 Summit talking with world leaders about the Agreement.  Clearly, he was not swayed by those conversations, and obviously, he did not read the Climate Change Encyclical given to him by Pope Francis during his trip —because he haphazardly withdrew the U.S. from what is arguably one of the most important accords intended to protect humanity in the face of climate change disaster.

So why is it such a big deal that he withdrew? Besides being a regressive move that perpetuates climate change denial, Trump is also shirking responsibilities of being a global leader that ‘plays well’ with other countries.  Withdrawing from the agreement ostracizes the U.S. from nearly every ally we work with on economics, global security, peacekeeping, and more.  As reported by the New York Times, leaders at the G7 meeting expressed concerns about Trump’s lackadaisical attitude toward climate change.  “The whole discussion about climate was very difficult…There’s a situation where it’s six against one,” said German Chancellor Angela Merkel.  The President of France reportedly told Mr. Trump “it was indispensable for the reputation of the United States and for the Americans themselves that the Americans remain committed.” 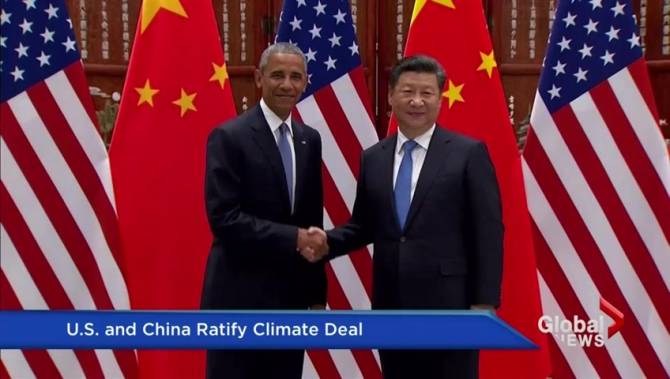 However, Nick Burns, Undersecretary of State during George W. Bush's administration said it best, “This would be a colossal mistake. It would also devastate our international credibility. We are one of the two largest carbon emitters, with China. We are the ones who put this deal together. It is the first step to try to do something about climate change. For President Trump to take us out, it is anti-science."

Some pundits surmise it really does not matter if Trump withdraws because the U.S. will have a hard time meeting Paris Agreement goals due to Trump dismantling the Clean Power Plan.  However, several experts assert the U.S. could still meet Agreement targets because the U.S. private sector is out pacing expectations of reducing emissions.  For example, Chief of the United Nations Environment Program, Erik Solheim, said on NPR that mega corporations such as Google, Microsoft, Apple, Dow, Dupont, and the renewal energy industry are leading the green revolution and momentum will not depend on the Trump administration. Not only are these corporations making strides to reduce emissions, it was reported that 30 major corporations sent Trump a letter urging him to stay in the Agreement.

Mr. Solheim also noted the U.S. will lose jobs if it leaves the Paris Agreement saying, "Wind engineer is now probably the most promising job opportunity in the United States," adding that "China and India are bringing the price of solar down so fast that coal was no longer competitive."

While world leaders and climate activists are disappointed by Trump’s decision, there is a silver lining—and you are part of it!  Through Surfrider’s network, we sent over 2,000 letters to Trump urging him to stay in the Agreement.  Even if our activism didn’t stop him from withdrawing, it is inspiring to see thousands of our supporters standing up for climate action.  The other silver lining is that Trump’s extensive waffling on the Agreement, put climate change front and center in the global news.

Much work lays ahead to combat the Trump administration’s attempts to rollback climate policies.  Surfrider will continue to monitor the Administration and hawk the EPA’s website to ensure climate change information is not permanently removed and/or diluted.  We will continue our 'on the ground' climate change adaptation work and pressuring elected officials to make wise policy choices despite the lack of leadership in the Whitehouse. Stay up to date with our climate work here.