The Surfrider Foundation, along with our Stop Poseidon Coalition partners, is celebrating an epic victory in the decades-long fight against a massive proposed desalination facility in Huntington Beach, California. Today's Coastal Commission meeting was a moving reminder of the power of activism and the importance of the California Coastal Act and the governing body that upholds the law. Hundreds of people came together to oppose Poseidon’s proposed desalination plant, which was described by Coastal Commission Executive Director Jack Ainsworth as “simply the wrong project, in the wrong location, at the wrong time.”

After five hours of public comment and two and a half hours of deliberations, the California Coastal Commission voted unanimously to deny a permit for a 50 million gallon per day seawater desalination plant in Huntington Beach. This decision marks a hard won victory in a 20-year campaign to protect Huntington Beach’s coast from this disaster of a project.

“We are thankful that the Commissioners unanimously exercised their responsibility to protect, maintain, and where feasible, restore, our coastal zone and public trust resources,” said Staley Prom, Surfrider Senior Legal Associate. “This proposed project absolutely flew in the face of coastal protection.”

Despite a staff report recommending denial and multiple LA Times columns lambasting Poseidon earlier this week, the final decision was considered unclear until the final hour due to well-known pressures on the Commissioners from the Governor’s office. By denying the project, Commissioners courageously stood up to political pressure and properly upheld the Coastal Act's policies to protect the coast from this damaging project.

“Today the Coastal Commission upheld their duty to protect California’s coast and ocean from harmful development,” said Mandy Sackett, Surfrider’s Stop Poseidon campaign lead, in response to the decision. “This is why we have the Coastal Act — to provide a check on coastal development that is independent of politics and profits, and to protect our coast for all people.”

The proposed project violated multiple Coastal Act and Huntington Beach Local Coastal Program policies, and Surfrider commended the Staff Report’s recommendation to deny the permit, on numerous bases. Those included, but were not limited to, the project’s impacts on public access and recreational opportunities; anticipated sea level rise, seismic, and coastal hazards concerns; environmental justice concerns; concerns related to siting mitigation in an area with extensive DDT pollution; and desal’s energy-intensive greenhouse gas impacts, which do not align with California’s climate goals. The 50 million gallon per day (MGD) desal facility would have drawn in more than 100 MGD of ocean water every day, having significant entrainment and impingement impacts on marine life, and yet Poseidon hadn’t even shown that it had secured a buyer or that this much water is actually needed. 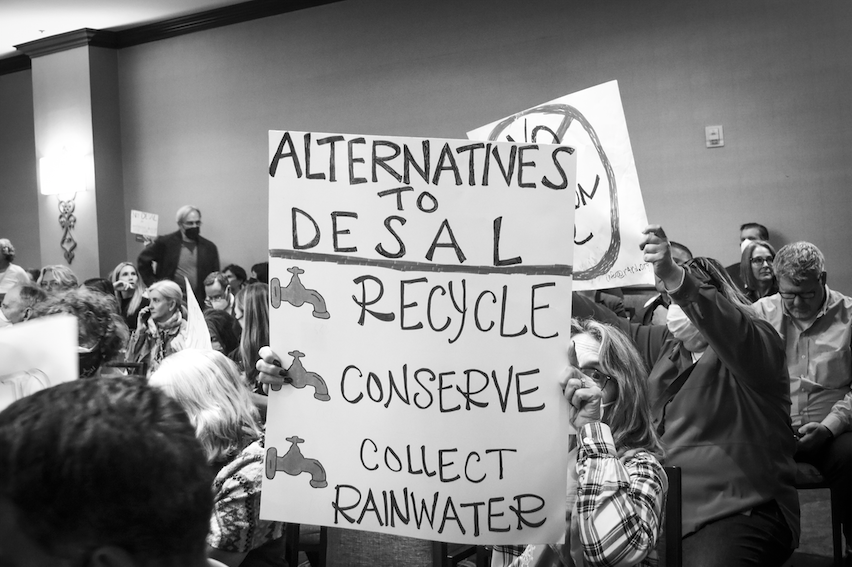 Jennifer Savage (Surfrider) and Susan Jordan (California Coastal Protection Network) both kicked off public comment by appealing to the Commissioners’ sense for this responsibility. In this case, an approved project would have raised local water rates, razed an existing wetland, perpetuated development in a zone with multiple environmental hazards, and killed marine life.

“Approval of the plant would have made a mockery of the state’s environmental justice commitments, climate change goals and sea level rise adaptation policies while setting a terrible precedent for future coastal development,” added Sackett.

While proponents of the project argued for the need to water due to California’s ongoing drought, project opponents — and ultimately the Commissioners themselves — pointed out that this project would not decrease Orange County’s water imports and would come with far more costs than benefits. During deliberation, Commissioner Kristina Kunkel recalled the language of AB 685, saying that the project simply could not ensure “the human right to safe, clean accessible, and affordable water.”

Coastal geomorphologist Dr. Dave Revell talked about the project’s vulnerability to sea level rise. Dr. Revell stated that the plant would soon become a “man made island” that would be extremely difficult to access or maintain. Siting the plant here would be “simply antithetical to all the sea level rise documents and guidance that have recently been approved by the Commission,” Jack Ainsworth later added.

The Commission has updated both its sea level rise guidance and environmental justice principles in recent years. Andrea Leon Grossman, climate director for Azul, pointed out that the project would immediately raise the water rates of low income members of the community. She noted that this water source would be 4-5 times more expensive than existing sources, a burden for people who simply cannot afford to pay more for water. 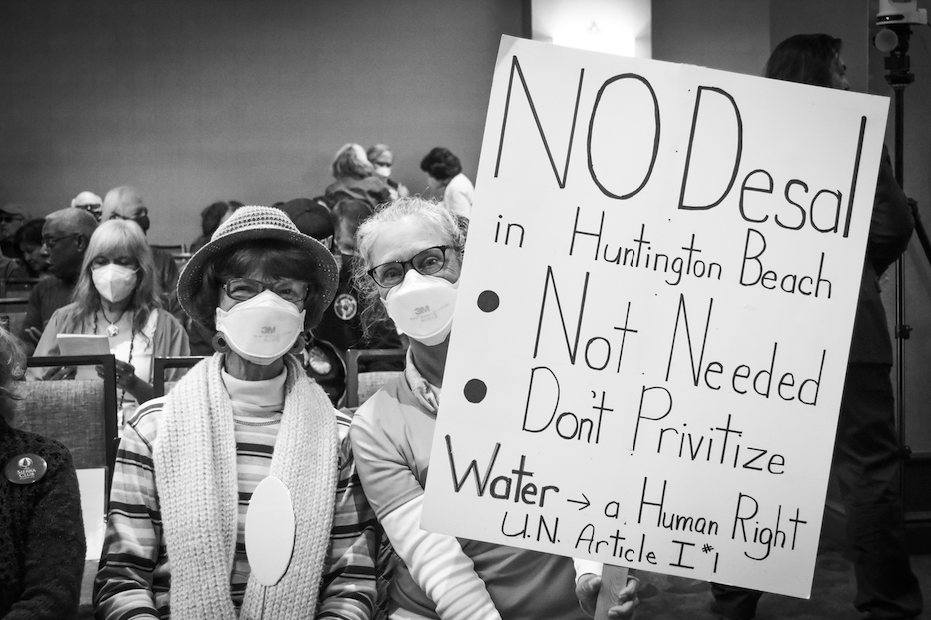 Dozens of speakers, including many members of our Huntington Beach Chapter, spoke of their frustration with the project’s hazard risks given how close it is to a state superfund toxic waste site, with one homeowner stating her fears of toxic contamination around her home should the plant flood. Others were appalled at the implications of the project’s intake pipes, which would have potentially killed hundreds of millions of organisms a year.

Sean Bothwell, Director of the California Coastkeeper Alliance explained that Poseidon’s proposed solution to this problem (which included filters on the pipes) would only reduce that impact to marine life by 1%. This is an offensive prospect for ocean life, given the project’s proximity to multiple marine protected areas. “There is no appropriate mitigation that would offset the impact of this project,” said Jennifer Savage, imploring the Commission to find itself “on the right side of history” by denying the project.

KC Fockler, Co-Chair of the Surfrider Huntington Beach / Seal Beach Chapter valiantly dedicated many long volunteer hours to the campaign to stop Poseidon over years, the last in a long line of chapter leaders who have opposed the project for decades. A classic tale of what we can accomplish with constant pressure! At the meeting, Fockler pointed out that the plant would also discharge toxic brine near the shore, stating, “I know I don’t want to be surfing in toxic brine for the rest of my life.”

Commissioners also noted the appalling lack of Tribal consultation for this project. One Tribal representative added that approval would have supported “short-term jobs and short-term water sources,” but not sustainable long-term solutions. Today, community volunteers and activists showed up in a big way and the Commission stood firm in their responsibility to uphold the Coastal Act and not bend to the demands of any politician. This will make a tangible difference for preserving California’s coast and ability for all people to enjoy it. This one's an official Surfrider victory!