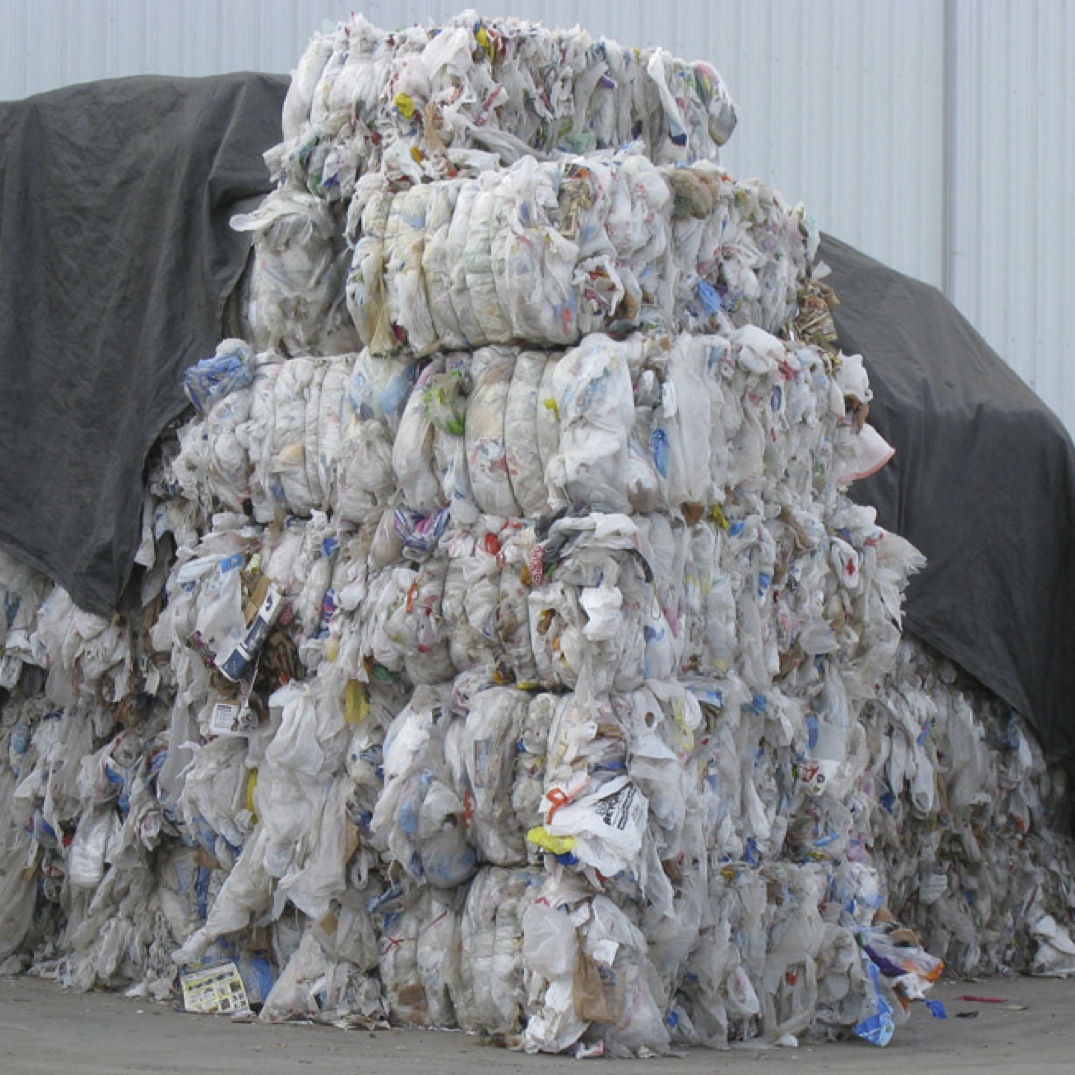 As carryout plastic bag usage in the United States soars over 100 billion (115 billion now by one estimate), more cities and states are looking at ways to reduce litter and the impacts of plastic bags.  Bag recycling programs have been set up across the country but as bag recycling rates hover around 5% it's easy to see that recycling is not the answer.  Reusable bag policy such as bag bans and bag fees are the easiest way to control the source of the problem.  Some cities are looking at voluntary measures to help solve the problem but as you can see from these examples, voluntary plastic bag reductions do not work.  (Photo shows tons of contaminated bags that can't find a buyer in CA, credit SLO County IWMA)

An important thing to remember is that voluntary efforts cost money.  How much money does your city have to spend on ads, outreach, education, signs, workshops, etc. for minimal results?  Here is a summary of various voluntary plastic bag reductions on different levels that have not worked.

Australia 2003-2005:  Australia adopted a voluntary approach to reduce plastic bags in October 2003 when a Code of Practice for the Management of Plastic Bags was agreed between the Australian Retailers Association and the Environment Protection and Heritage Council (EPHC).  Major retailers spent over $50 million (Aus) on the program and made some nice efforts but ultimately fell short of their target reductions and recycling rates.  The Code required 90% and 25% participation rates for supermarkets and non-supermarkets respectively, and set out a 50% reduction target and a 50% recycling rate to be achieved by end 2005.  It was reported that a reduction of 45% and a recycling rate of 14% were achieved, and 19% of non-supermarkets signed onto the Code.  The program was abandoned and now more places in Australia are seeking reusable bag ordinances.

Los Angeles County, CA 2008-2010:  In 2008 the LA County launched the Single Use Bag Reduction and Recycling Program, otherwise known as ‘Brag About Your Bag’.  The main benchmark of success for the program was a 30% disposal reduction of plastic bags by July 2010.

In a report to the LA County Board of Supervisors, the Dept. of Public Works concluded, “that the voluntary Single-Use Bag Reduction and Recycling Program was not successful in achieving its goals.  Over a two-year period and despite State law requirements under AB 2449, stores in the County unincorporated areas did not provide data that would enable Public works staff to determine if the voluntary Program benchmark of 30 percent disposal reduction of plastic bags by July 1, 2010, was met.  In addition, not more than eight stores at any time had met the minimum participation levels.  Although the public education and outreach aspects of the voluntary Program, including the ‘Brag About Your Bag Campaign’, raised awareness of the impacts of single-use bags and the benefits of reusable bags, it could not be determined if this awareness translated into a shift in consumer behavior that was significant enough to address the major objectives of the County.”

In December 2010 the LA County Board of Supervisors acted by passing a carryout bag ordinance that went into effect in December 2011.

Chicago, IL 2008-present:  The City of Chicago Plastic Carryout Bag and Film Plastic Recycling Ordinance (“Plastic Bag Recycling Ordinance”) took effect December 11, 2008 for retail and wholesale establishments larger than 5,000 square feet. On March 11, 2009 the ordinance took effect for all retail and wholesale establishments, regardless of size.  This program requires stores to participate with reusable bag and recycling efforts but it sounds like many are opting out.

According to the City of Chicago Dept. of Environment 2011 report, “The biggest difference from 2009 to 2010 is the increase in number of businesses reporting that they did not recycle any plastic bags, which went from 95 to 486. Based on phone calls and report entries, the primary reason for this was that although businesses placed a container in their store, customers did not return plastic bags.”

Currently, a new carryout bag ordinance has been introduced by Alderman Moreno for consideration by the Chicago City council to address the shortcomings of the recycling program.

Palo Alto, CA 2009:  In reports to City Council, City Council Staff analyzed six options to achieve plastic bags reductions and reusable bag enhancement.  Of those six options, ‘Promote Reusables Only’ and ‘Try More Promotion First’ were determined to be least effective to achieve their prime objectives.  Palo Alto decided to pass on a voluntary program and move directly to a checkout bag ordinance.

San Francisco, CA 2005-2006:  In November 2005, The City forged an agreement with grocers to reduce plastic bag usage by 10 million when estimates of current usage were between 50 and 150 million per year.  The reduction included suggestions for achieving the goal such as, bagger retraining, selling reusable bags and internal employee training.  It was deemed a failure as stores failed to report their numbers by the December 2006 deadline.  The deadline was extended three times and one grocery chain submitted numbers, but they could not be released due to a confidentiality agreement.  Without any verifiable numbers the program was a failure and appeared to simply be a stall tactic.  (Info compiled from Jennie Reilly Romer's, The Evolution of San Francisco's Plastic-Bag Ban)

Santa Clara, CA 2009: The Santa Clara ‘Got Bags’ program was one of the most thorough but was scrapped in favor of a bag ordinance because it did not work, they only saw a 2% increase in reusable bags.  To increase the utilization of reusable bags, Integrated Waste Management (IWM) staff has distributed reusable bags at unincorporated neighborhood clean-up events. Additionally, staff visited retail outlets in and around unincorporated Santa Clara County to distribute “GOT BAGS” window decals, posters and pins for store clerks. Staff also spoke to store managers and owners to get buy-in and answer questions, and they distributed reusable bags to stores that did not have them. The store managers/owners were very receptive to making a change to reusable bags, having them available for purchase by their patrons and encouraging their use in a number of different ways.

Santa Barbara 2009-present:  The Santa Barbara ‘Where’s Your Bag’ (WYB) program was embraced by city council as a great way to reduce disposable bags and promote reusable bags but has failed.  According to a March 2012 staff report to the Santa Barbara City Council, “At its inception in 2009, WYB partners successfully recruited ten local grocery stores. Participating grocery stores were provided with educational materials, staff training, parking lot signs, and tabling events where free reusable bags were given away to store patrons. The campaign also produced media releases, public service announcements, and held “Prize Patrol” events to further educate the public on the environmental benefits of reusable bags. To date, 7,100 reusable bags have been distributed through the program free of charge.

The public education and outreach components of the WYB campaign were successful, as the reusable bag message has raised public awareness through numerous media outlets. However, education within the grocery stores has proved to be ineffective. Despite initial enthusiasm from participating stores at the onset of the program, most stores did not incorporate all of the program elements into their daily operations, and did not see the hoped for behavior change by store patrons.”  In response, City Council voted to direct their Ordinance Committee to draft language for a carryout bag ordinance to be considered at a later city council meeting and Surfrider Santa Barbara has launched a campaign around the issue.

State of California 2007-present:  This one is a state mandate, but shows how programs on the statewide level also fall short of goals and expectations.  Starting July 1, 2007, AB 2449 has established a six year pilot program requiring most large grocery stores and other retailers to create an in-store recycling program for the collection and recycling of plastic 'carry out' bags. The program will include: Labeling bags to return to the store for recycling, Placing recycling bins in visible and accessible locations for customers, and The provision of reusable bags for customers to potentially purchase and use in lieu of disposable ones.

As you can see from these examples; resolutions, voluntary programs, and even state mandates for recycling fail to reduce the amount of bags that enter the litter and waste stream.  Bag policy is the most effective way to reduce litter and the impacts of plastic bags.  Support your local reusable bag ordinance, bag ban, bag fee, bag bill, etc.!