A Choice to Keep Wasting Water in Rehoboth Beach, DE 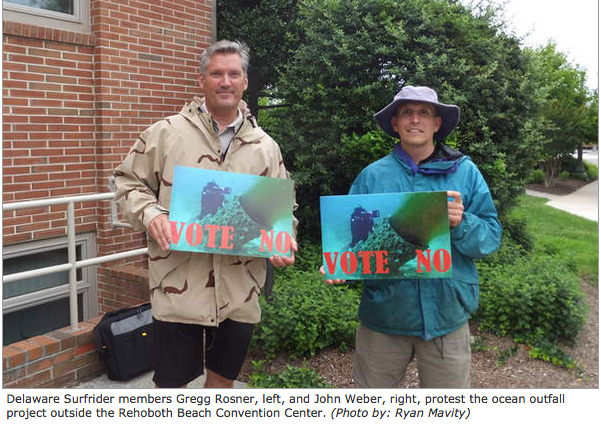 The Delaware Chapter suffered two set backs in their campaign to oppose a new ocean outfall to be build off-shore of Rehoboth Beach.  First, their appeal of the state environmental agency, DNREC's, decision to approve the ocean outfall was not heard due to jurisdictional matters.  Secondly, property owners in Rehoboth Beach voted to allow the City to borrow the money needed to build the pipe by a very slim margin, 637-606.  Media coverage of these decisions here:  www.delawareonline.com

Volunteers from the chapter and Surfrider staff have really put forth a herculean effort in recent weeks to build the case for their appeal and to educate and inform the local voters on what the ocean outfall proposal will mean to their community and why Land Based Application is both the preferred environmental alternative, but could also be done cheaper and sooner then building more pipes to discharge into the ocean.  The Chapter sent out this letter to registered voters in Rehoboth clarifying their position and asking for their vote.  Read more about the Chapter's outreach on this issue here:  capegazette.villagesoup.com

Ironically enough, while the voters of Rehoboth Beach were voting to continue to throw away valuable freshwater, an article was released on http://www.takepart.com  which highlighted 8 global cities that are in serious danger of running out of freshwater in the next few decades - not because they don't get enough rain but because their water management practices are so wasteful and decaying pipes and infrastructure are literally bleeding away the water their growing population and economies need to survive.  Click here to see which cities made the list.

Meanwhile stay tuned to the Delaware Chapter's website to see what steps they decide to take next to try to convince their community to reduce, reuse & recycly water.