Yesterday, the Surfrider Foundation and our local collaborators from Resource Media organized a press conference, held in the office of Washington State Governor Jay Inslee, to send the message that our coastal communities, our jobs and livelihoods, way of life, and clean water are put unnecessarily at risk by the dirty offshore drilling proposal put forward by the Trump administration. 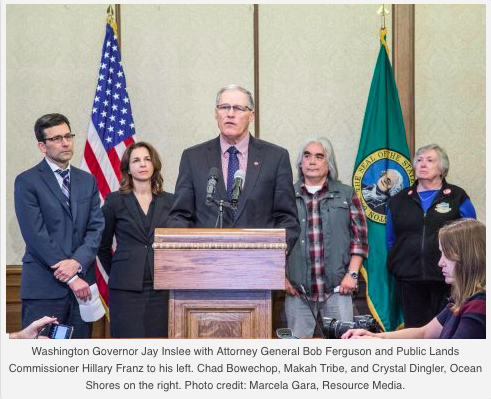 On January 4, 2018, the Trump administration released the 2019-2024 draft plan to drill for oil and gas in U.S. waters. Washington officials immediately voiced their opposition, joining coastal leaders from both parties around the country in urging the Department of the Interior to protect their economies and communities. The Pacific Coast has been closed to new drilling for over three decades, with the last federal lease sales taking place in 1984. Commercial, tribal, and sport fishing, tourism and recreation businesses are threatened by the prospect of increased risks of an oil spill.

The Bureau of Ocean Energy Management (BOEM) is accepting public comments on the draft plan through March 9, and will hold a single public hearing in each state to gather additional input. The BOEM public meeting and the citizens forum scheduled at the Landmark Convention Center on Feb. 5 were cancelled on Feb. 4 by the venue owner. We expect the BOEM meeting will be rescheduled sometime in the near future. Along with our partners at the Washington Environmental Council, Sierra Club and 350.org, we will turn out our collective members to a companion “People’s Hearing” at that time, to provide the public an opportunity to give oral testimony on the proposal, in contrast to BOEM’s written comment-only format. 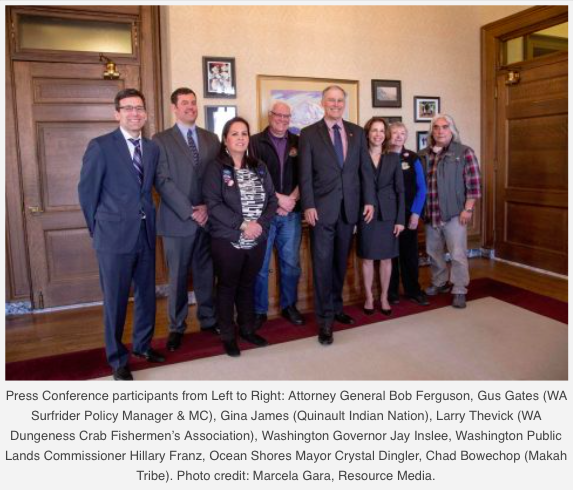 Archived Livestream from the Press Conference on TVW

On Monday, Governor Inslee and Attorney General Bob Ferguson each sent letters to Interior Secretary Ryan Zinke, formally requesting that waters off the Washington coast be removed from the plan, and if they aren’t, an intent to initiate litigation on behalf of the citizen’s of Washington state, respectively. Inslee’s letter reads in part, “I have stated unequivocally that opening the Pacific Coast to new oil and gas drilling for the first time in decades poses grave danger to our state’s unique recreation, tourism, shipping, military and fishing industries, threatening thousands of jobs and billions of dollars in revenue each year.” Read more via the official release from Governor Inslee’s office.

“The bottom line is, if they go forward, they will see us in court,” Ferguson said. Read more in the Seattle Times article.

Gina James, a Quinault Indian Nation business council member, said the nation has 30 miles of undeveloped coastline on the Pacific Coast. “We have traditionally gathered there for thousands of years. We have a huge razor clam harvest, and we have one of the largest Dungeness crab fisheries out of any tribe in the whole West Coast,” James said. A spill would threaten all that, she added. Read more in the OPB article.

Ocean Shores on Jan. 22 became the first city in Washington to adopt a resolution banning offshore drilling, citing the need for clean water and abundant wildlife. “We are gravely concerned by efforts in that other Washington to open up our coast,” Ocean Shores Mayor Crystal Dingler said. “If the oil rigs come, most of us won’t be able to see them, but we will see the effect of their presence.” Read more in the Kitsap Daily News.