Why are there still plastic bags in California? 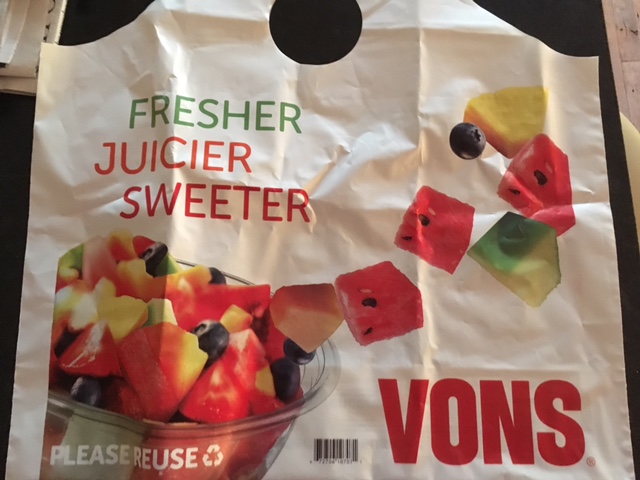 The voters have spoken and California recently affirmed the statewide plastic checkout bag ban by passing Proposition 67 in the November election! While we are still awaiting final certification of the vote from the Secretary of State, CalRecycle has placed all of the rules and regulations on their website and most stores have started to implement the law. There was confusion with some shoppers at first but now a strong majority of people seem to be remembering their reusable bags. People have been concerned because some stores are still offering a thicker plastic bag at checkout while some stores are not covered by the state law so here's the lowdown:

Proposition 67 affirmed SB 270, which was passed in 2014 by the California legislature and signed into law by Governor Brown. According to SB 270 a plastic reusable bag is okay as long as it's at least 2.25 mils thick and meets other criteria. If they were swapped out for every thin plastic bag it could be a problem but that's where the ten-cent fee included as part of SB 270 comes in as important. Paper bags and reusable bags can be sold for a minimum charge of ten cents which can be viewed as an incentive for people to remember their reusable bags. Many places throughout the state have been using the same reusable bag criteria and charges for their local ordinances with success. We are not seeing those thicker bags littered or being found at our beach cleanups. Those thicker bags are typically made from recycled plastic so have the smallest carbon footprint when used a few times compared to the thinner bags which need to be made from virgin plastic.

These plastic bags are definitely not my top choice of bags but part of the compromise that got SB 270 passed. I'll still be rocking the canvas bags we get from GreenVetsLA, sewn by veterans with fabric reclaimed from local designers. Many lawmakers were concerned the cost of reusable bags could be out of reach to many people and cause economic hardship. Tough to believe but some people bought it. This loophole is an issue we addressed last year. Hopefully we can strengthen the law in the future but it's a great start for now that is instantly removing millions of plastic bags from the waste and litter streams. In Ventura I see the difference immediately at the grocery store as a majority of people are remembering their reusable bags now.

SB 270 calls for these stores to be covered by the bag ban that account for most disposable plastic bags:

Grocery Stores: Full-line, self-service retail stores with gross annual sales of at least $2 million that sell a line of dry groceries, canned goods, or nonfood items, and some perishable items.
Large Retail Stores with a Pharmacy: Stores that have at least 10,000 square feet of retail space and a pharmacy and that generate sales or use tax.
Convenience Stores, Food Marts, or Liquor Stores: Stores engaged in the retail sale of a limited line of goods, generally including milk, bread, soda, and snack foods, and that hold a Type 20 or Type 21 license issued by the Department of Alcoholic Beverage Control.