The Surfrider Foundation has achieved its most successful year ever, winning 97 coastal victories to protect our ocean, waves, and beaches.

Peter Douglas, the revered founder of the California Coastal Commission, once said that, “the coast is never saved, it is always being saved.” Sadly, these words have never been more true than they are today. As 2019 comes to a close, our coastlines face unprecedented threats from pollution, development and climate change - not to mention the indifference (or downright hostility) of many elected leaders entrusted to protect these resources.

Fortunately, Surfrider’s grassroots network has never been stronger or more inspired to protect our coasts and ocean. In 2019, Surfrider achieved historic success by winning 97 coastal victories, breaking our previous record of 82 victories in 2018. These campaign wins tackled a range of coastal threats – from plastic pollution to offshore drilling to sewage overflows – and are a testament to the power of citizen activism. 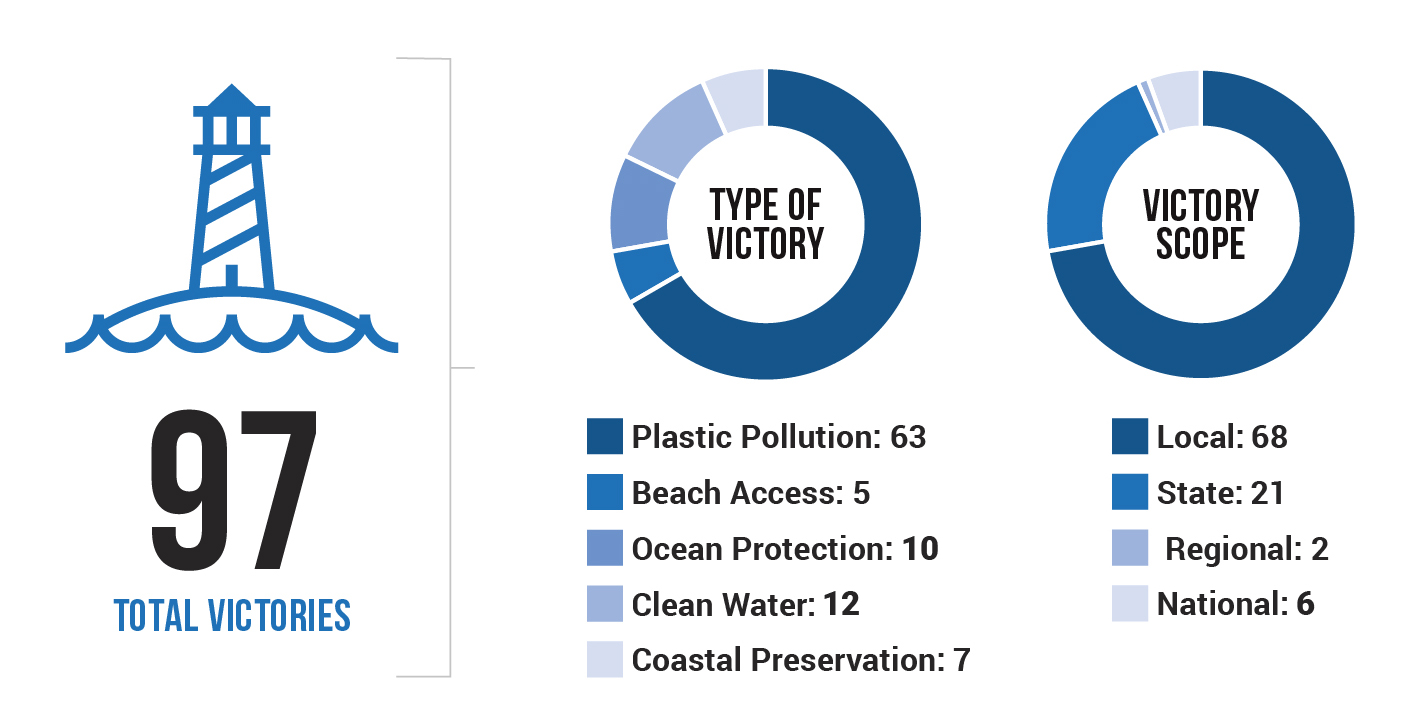 Yet, these victories tell only part of the story. Over the past year, Surfrider volunteers contributed over 182,000 hours to coastal conservation through our chapters and clubs. These individuals are the leaders in their communities and schools who provide a never-ending commitment to defend our coasts. They are the ones who organize chapter events, clean beaches, green campuses, speak at city council meetings and wage the battles against harmful projects.

Below is a summary of some of our 2019 achievements across each of our focus areas. We extend a heartfelt thank you to all of our chapters, volunteers, supporters and partners who contributed to this success!

Surfrider secured 63 victories to reduce and prevent the harms of plastic pollution on our coastal environment. From New England to Hawaii and Florida to the Pacific Northwest, Surfrider’s network helped to drive policy change to address the plastics crisis that is suffocating our ocean. There was tremendous work at the state level, with plastic bag bans passed in Maine, Oregon, Connecticut, Vermont, New York and Delaware, and polystyrene foam container bans in Maryland, Maine and Vermont. Surfrider’s network also tackled plastic pollution by organizing more than 850 beach cleanups through the Better Beach Alliance and registering 600 Ocean Friendly Restaurants to serve plastic-free meals.

Surfrider secured 12 victories to protect water quality for beachgoers across the U.S. At the national level, we led a coalition to save federal funding to monitor water quality at thousands of beaches across the U.S. and passed the Harmful Algal Bloom and Hypoxia Research and Control Act. In Hawai‘i, we passed a state law to tackle cesspool pollution. And, in Florida, we restored the Healthy Beaches Program and protected the Florida Keys coral reefs by banning oxybenzone sunscreens. These victories were complemented by the monitoring of hundreds of beaches by Surfrider’s Blue Water Task Force, the installation of Ocean Friendly Gardens, and numerous community partnerships to solve local pollution problems.

Surfrider secured 10 victories to protect ocean ecosystems in 2019. Most notably, we helped to block new offshore drilling proposed in over 90% of U.S. waters by the Trump administration. Surfrider’s network educated millions of people about the threat of offshore drilling, organized thousands of businesses in opposition, and passed hundreds of community resolutions on the Atlantic, Pacific and Gulf coasts. Surfrider also passed state offshore drilling bans in Oregon, New York, Maine and New Hampshire, joining bans passed in California, Florida and New Jersey in 2018. Our Stop Offshore Drilling campaign continues in 2020 with the goal of passing a federal ban on new oil and gas drilling in U.S. waters.

Surfrider secured 7 victories to protect U.S. shorelines from coastal development and climate change. Notable wins included reauthorizing the Land and Water Conservation Fund, one of our nation’s best conservation programs, that protects coastal places and enhances recreational opportunities. We also launched our Rising Seas campaign to raise awareness about the impacts of climate change on our coasts and drive grassroots advocacy on this critical issue. Finally, Surfrider released the State of the Beach Report in November, generating national media coverage and compelling states to improve their coastal preservation policies.

Surfrider won 5 victories to protect and improve coastal access in Florida, Maine, Hawaii and California in 2019. This fall, we won a major victory when Maine’s highest court upheld broad public beach access rights at Goose Rock’s Beach, a sandy beach popular with residents and visitors in southern Maine. Other notable wins included protecting coastal access in Mickler Beach in Florida and Laneakai Beach in Hawai‘i. Finally, Surfrider chapters and clubs partnered with community groups across the U.S. to help bring thousands of underserved youth to the coast. 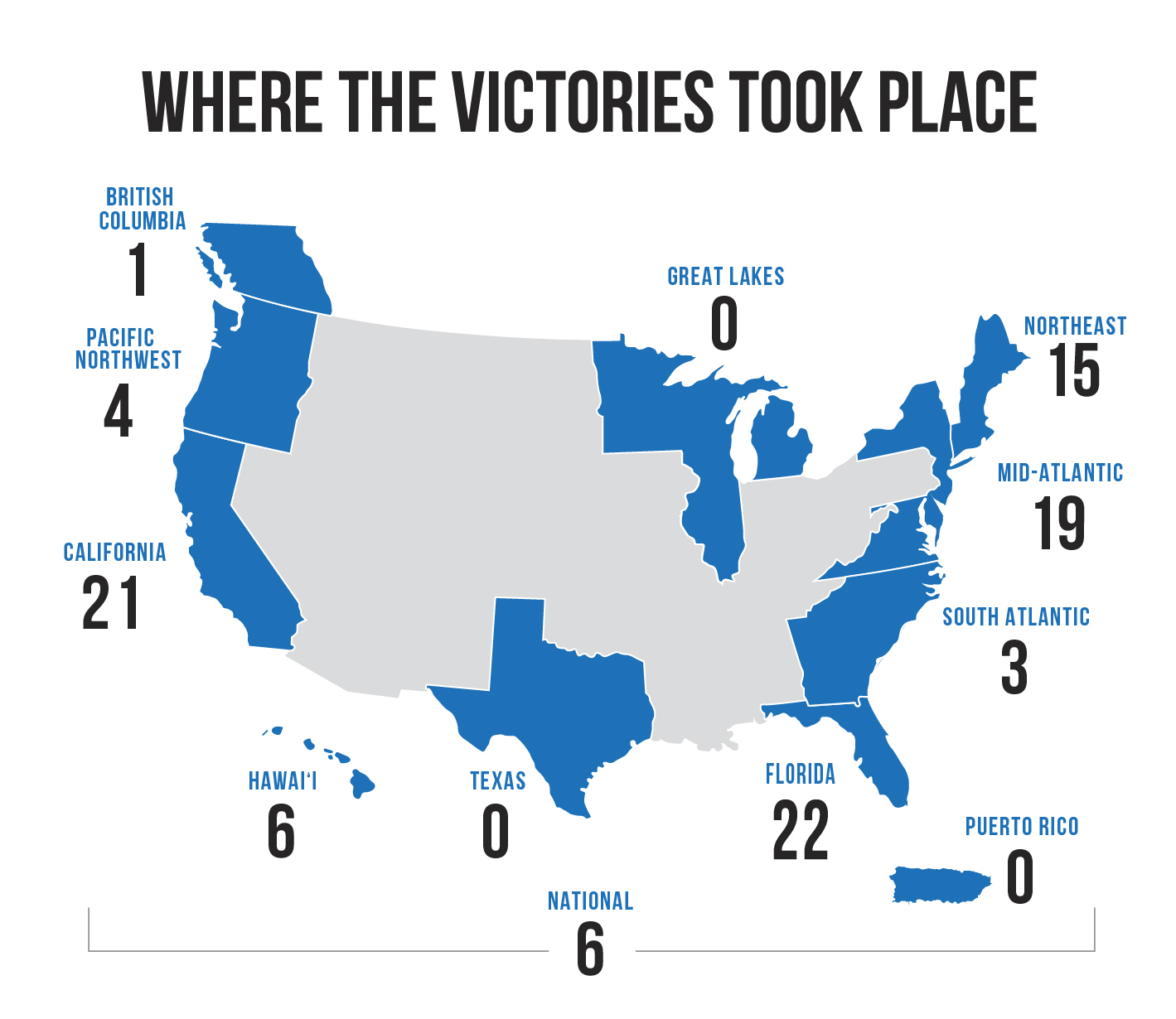