Surfrider Foundation’s Rise Above Plastics program has focused on educating people about single use plastics, especially items like bags, cups, water bottles and straws. Anyone who has done their share of beach cleanups has picked up plenty of those items. But they have likely also picked up balloons, pieces of balloons and balloon ribbon. A few SF Chapters are taking this on and you may want to consider working on the relatively easy and non-controversial issues of balloon litter in your chapter.

We first have to give a shout-out to the good folks at Balloons Blow. You can also find them on all social media. They have focused on balloon litter for years and not only do they clean balloons from beaches, they actively work to prevent mass balloon releases (that they call mass littering events). Their website is a great source of information like alternatives to balloon releases and the laws in many states and localities around intentionally releasing balloons. Yes – believe it or not in many states it is legal to release say 25 balloons, but not 26! Huh?

It is there that we also learned that some balloons are actually plastic. So called Mylar balloons are really PET plastic with a metallic coating. Latex balloons however are not much better since they don’t break down in the environment as claimed. 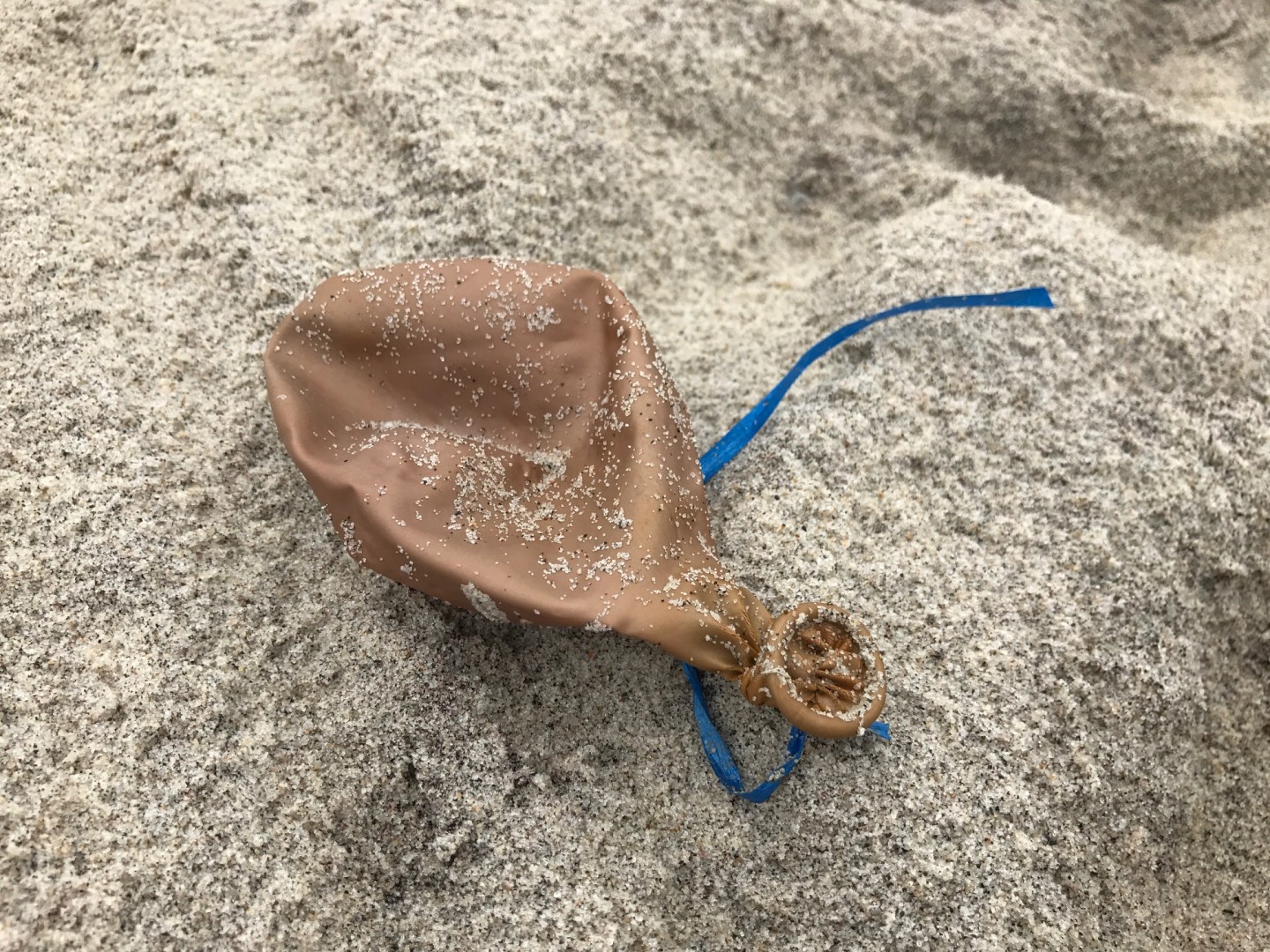 On populated and frequented East Coast beaches, my experience is that balloons are picked up daily, but often only one or two at a time. Presumably, dozens of people are doing the same – removing balloons from beaches. But on desolate stretches of beaches, like on Virginia’s uninhabited barrier islands, it is a much different story. When such beaches are cleaned in a trash survey, hundreds of balloons can be picked up in a single day on an island 6 or 7 miles long. The Virginia Beach Chapter’s Christi Trapani participates in such trash surveys under contract with Clean Virginia Waterways and regularly records dozens of balloons each time. Balloon litter is now a special focus of this Virginia state program. Litter is only half of the problem. Ingestion and entaglement is a serious issue with balloons and wildlife.

On International Surfing Day this year, the Eastern Long Island Chapter’s Kurt Fuchs, Renee Serritella and others removed 100 balloons from 1.5 miles of accessible but not heavily used beach. 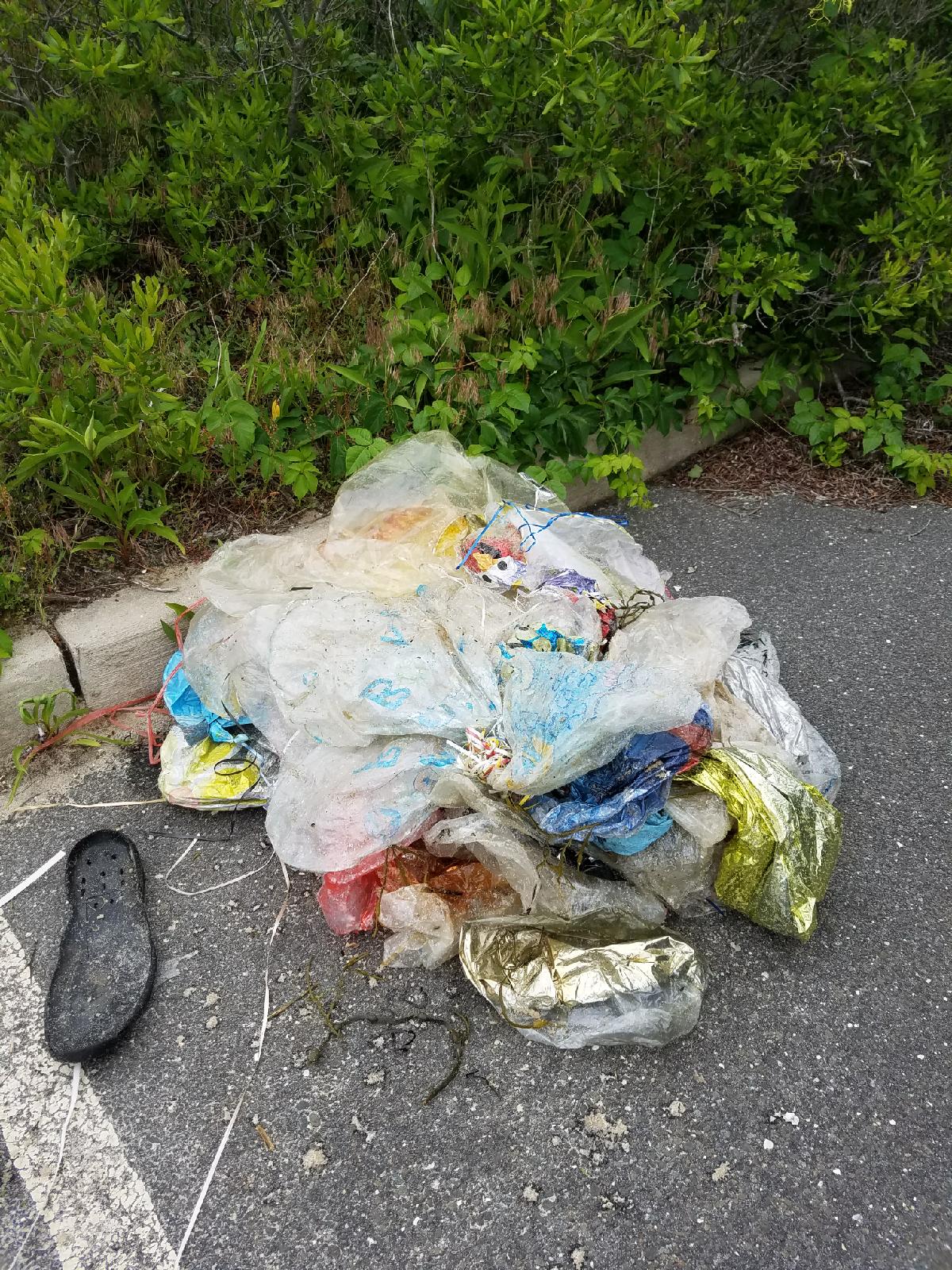 There definitely is a problem and some chapters are doing something about it. Leaders of the South Jersey Chapter noticed that the town of Margate had a local ordinance against intentionally releasing balloons in the town. So the chapter leaders brought that ordinance to the neighboring towns of Ventnor and Longport. Those successes led them to nearby Atlantic City, and Brigantine, and then to the Jersey Shore Chapter’s territory in Long Beach Township. All of these towns passed similar ordinances! As a result there is also state bill to essentially do the same thing, to ban the intentional release of balloons in NJ.

Like many chapter campaigns, these local ordinances are passed without requiring money or intense lobbying. Typically a small group of concerned resident and a sample ordinance is enough to win over a local town council.

However there is actually a “Balloon Council” that lobbies on behalf of balloon manufacturers and retailers. Sadly, a statewide bill in California was just vetoed by Governor Jerry Brown that would have banned outdoor releases of metallic balloons. Metallic balloons can cause power outages and fires after contacting overhead power lines.

So consider adding balloons to the bags, bottles, cups and straws that you and your chapter are already working to eliminate. You’ll feel lighter than air if you do.