The Surfrider Foundation is opposed to permanent or long-term storage of radioactive waste at the recently deactivated San Onofre Nuclear Generating Station (SONGS) due to its proximity to the coastline, susceptibility to geological instability and location within a densely populated area. Surfrider is advocating to remove the waste as quickly as possible.

The Surfrider Foundation is closely tracking the process of the decommissioning nuclear plant. Our last update reported that the first canister was loaded with spent fuel for dry cask storage in January 2018. Since then, three more canisters have been loaded and placed into dry concrete storage known as the independent spent fuel storage installation or “ISFSI.”

Last week, a Community Engagement Panel (CEP) was held in Laguna Hills where Southern California Edison (SCE) gave an update on the fuel transfer process. Unfortunately, a significant technical issue has emerged. SCE reported that they discovered a broken shim pin when conducting their pre-loading monitoring inspection of the fifth canister. They also found several bent pins. This issue was reported in the LA Times and the San Diego Union Tribune.

It is unclear how severe of a safety concern these faulty pins may pose. During the CEP meeting, SCE representative Tom Palmisano explained that SCE inspected the canisters prior to loading, and deemed that they are safe for storage, but admitted that they were unable to inspect every pin. This means that the four already loaded canisters should have intact pins, but we don't know for sure since not every pin can be seen during the inspection.

SCE is unable to retroactively inspect the inside of a loaded canister, since internal monitoring protocols were never developed; a concern that Surfrider and multiple organizations have warned against. The implications of a potentially faulty pin remain unclear and Surfrider is actively working to determine the significance of this technical issue. If a faulty pin prevents helium from circulating, this could pose a safety hazard.

Shims are hollow spacer devices made from aluminum, which are placed inside the spent fuel canister, between the basket (which holds the spent fuel assemblies) and the inner canister wall. Their purpose is twofold: to allow a path for the flow of helium throughout the canister to facilitate cooling, and to act as a support structure, securing the basket. At the bottom of each shim, are four bolts or “pins.” These pins elevate the shim off the bottom of the canister to ensure that helium can move evenly throughout the canister and surround each assembly. 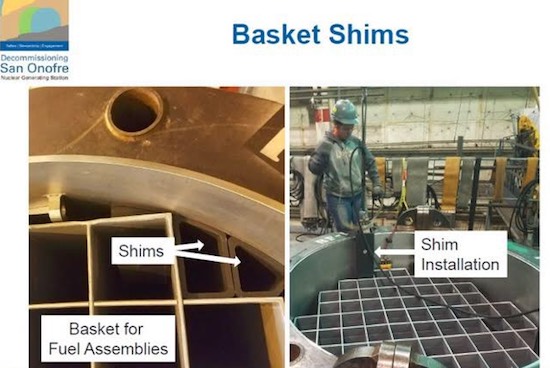 Shims are hollow aluminum spacers placed between the canister wall and the inner “basket for fuel assemblies” to ensure that the basket fits snug into the canister, while allowing helium to flow easily throughout.

Surfrider is concerned about the apparent lack of transparency leading to this issue. SCE knowingly received modified Holtec canisters, different than the original proposed design used for spent fuel on site, without adequately sharing this information with the public. This, after pushing the importance of using a standardized dry storage system in their reasoning for moving forward with the Holtec canister in the first place. Additionally, SCE found the first faulty shim pin in February, notified Holtec who found several of their canisters had the same issue in other locations, but SCE didn't make a public announcement of this potential issue until late March. Understanding that an initial internal safety assessment and investigation is necessary before sharing information on issues pubically, it would be preferred that the public is notified as soon as possible.

Finally, it is unclear whether this issue will prevent the ability of these four loaded canisters from being safely moved off site when an alternative storage location becomes approved. Federal regulations require intact canisters for safe transport. Since this is a new issue, we do not know how the NRC will respond.

What are the Options?

When the discovery was made, SCE stopped loading canisters for ten days to evaluate their options. Originally, SCE purchased 73 spent fuel canisters from a manufacturing company called Holtec. Of the 73 already purchased, 43 are a newer design, which contain the faulty pin/shim design. The older shim design does not include any pins, but is a cutout of solid metal. Holtec is taking responsibility for the faulty shims and has agreed to switch all remaining canisters to the old shim design. See the photo below for a comparison of old versus new design. 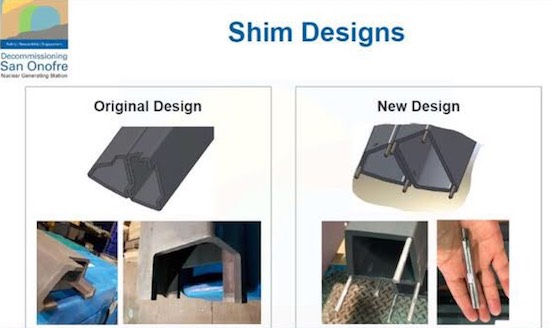 The two shim types currently used by Holtec canisters at San Onofre. Original design (left) will be used for the remaining 69 canisters. The four already loaded canisters have the pin or “new” design (right). These were the pins found to be loose or bent in other canisters.

SCE claims that monitoring the temperature of the four canisters already loaded in the newer design will be sufficient to determine whether those canisters have any faulty pins posing a safety hazard, and that there is plenty “margin of error.” Surfrider would like to see a special CEP session held for the public to discuss options moving forward, as well as a clear discussion of the pre-loading inspection requirements established by the NRC. One possibility is to reload the four canisters into the older “cutout” canister design. SCE is reluctant, however, because no utility has ever reloaded a canister. There are technical issues associated with reopening the sealed canisters, reflooding the baskets and avoiding radiation exposure to workers. At the CEP meeting last week, Palmisano estimated that a technique to transfer waste between canisters would take 2-3 years to develop.

This emerging issue serves as a stark reminder to the urgency and importance of removing the waste as quickly as possible – being mindful of where the waste will get transferred. Utilities and federal leaders must take stronger action to find a consent-based, geologically stable, inland repository for nuclear waste, to be operated by highly trained and qualified nuclear storage technicians. In addition, Surfrider is adamant that SCE and site operators enact extensive safety precautions beyond what has been proposed.

Surfrider calls for safety precautions to include keeping one cooling pool available in the event of an accident or canister cracking, a mechanism or structure that prevents direct salt or salt water exposure to steel canisters, more thorough efforts to prevent water from entering the cavity enclosure, a response plan to ensure immediate removal of freshwater, saltwater, and/or sand from the dry storage unit should it become inundated, a safety and evacuation plan at the current radii required for operating nuclear power plants, and more. All in all, Surfrider wants to see more careful and readily employed contingency plans by SCE when it comes to nuclear waste storage. The fact that there was no method developed to safely transfer waste from potentially compromised canisters before loading began, is not a great example of employing the precautionary principle.

Recently, SCE announced a panel of experts required as part of the Citizen’s Oversight lawsuit settlement. The panel will serve to advise SCE on developing a transportation plan when an offsite storage location is identified, and develop a strategic plan to help get the offsite location certified. We are hopeful that this panel will take a holistic and precautionary approach to ensuring safe storage and transportation of this high level radioactive waste.

Ultimately, the federal government is the only entity that can truly supply a long-term solution for the safe storage of nuclear waste. That is why we must call upon our federal elected officials to step up and address this important and pressing issue. Sign our action alert today!

How Can I Get Involved?