Americans love the beach, yet coastal water quality continues to be threatened by discharges of stormwater and sewage. Years of neglect have left our wastewater infrastructure in disrepair, outdated and failing. In fact, sewage spills and infrastructure failures release over 900 billion gallons of untreated sewage into surface waters every year!

Many communities are not even connected to sewers but instead rely on cesspools and septic systems. These antiquated systems never adequately treat sewage but instead allow household waste to leach into ground and surface waters.  Approximately 25% of U.S. households are still serviced by these disposal systems, and nearly 50% in some states, especially in rural areas.  And we’re not just talking about farm country here.  Florida has 2.7 million septic systems located throughout the state, and the eastern end of Long Island in NY has approximately 360,000 on-site sewage disposal systems (septic systems and cesspools).

Join us and ask Congress to invest in upgrading America’s failing sewage infrastructure and to protect our coasts and our communities.

This blog post is the third in a series that explains how the most commonly used wastewater systems fail and pollute our coastal watersheds and the ocean with sewage. View Part 1: Cesspools & Part 2: Sewage Spills and Failures

The #1 water quality problem in areas serviced by individual wastewater systems like cesspools and septics is nitrogen contamination of fresh and marine waters. Conventional septic systems consist of a septic tank that allows the solids to separate from the liquids. Within the septic tank, bacteria digest the sewage sludge that settles on the bottom. The liquid effluent then flows into either a leaching pool or drainfield, and then the effluent slowly leaches out into the surrounding ground  where it percolates through the soil until it joins groundwater and eventually surface water flows.

When septic systems are situated properly with sufficient  separation between the drain field or leaching pool and groundwater, most of the pathogens (bacteria, viruses, etc) are filtered out or bind to dry soil particles as the effluent trickles down towards the groundwater. The effluent that eventually reaches the groundwater however is heavily polluted with nitrogen (and some phosphorous). The nitrogen-laded groundwater flows downstream towards surface waters like lakes and streams, and ultimately the ocean. 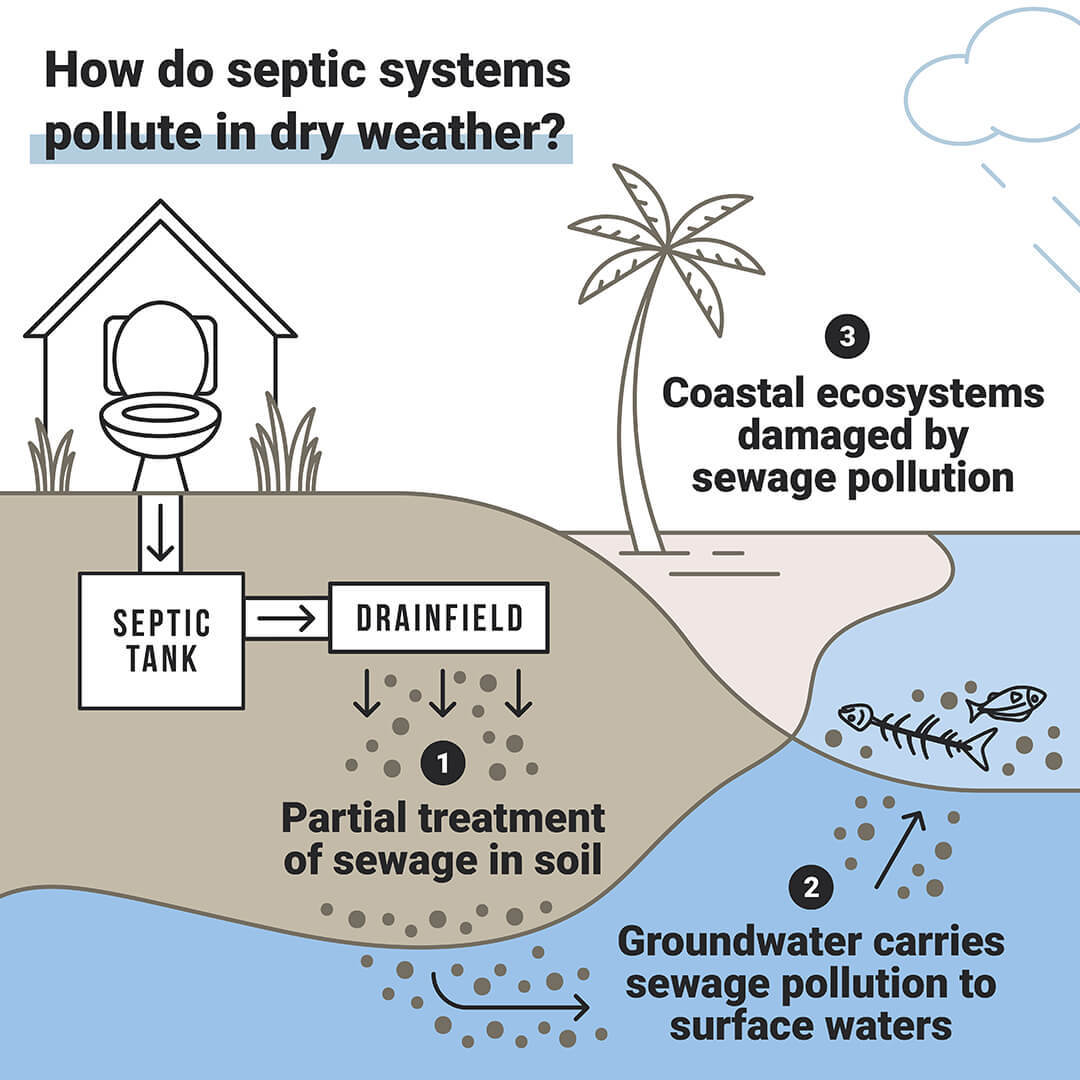 High levels of nitrogen in waterways have severe impacts on coastal ecosystems. Nitrogen acts as a fertilizer, causing algae blooms that deplete the water of oxygen when their plant mass decomposes and often causing mass die-offs of fish, turtles and other aquatic life from a lack of oxygen. In tropical regions, the algae smother coral reefs and cause these highly valuable systems to fail. In more temperate regions, high levels of nitrogen in the water lead to the decline of sea grass beds that provide nursery habitat for many important fisheries. Eutrophication, or over-enrichment of nutrients, in coastal waters also leads to an increase in harmful algae blooms that produce toxins that contaminate shellfish, cause fish kills and other sea life to die, and even threaten human health with a whole suite of mild to severe symptoms.

During wet weather that causes local flooding to occur, septic systems can even discharge sewage pathogens harmful to human health into our recreational waters.  Flooded conditions can raise the water table so that there is little or no dry soil between the drainfield and groundwater and thus no filtering of pathogens. During flooded conditions, septic drain fields can also get backed up when the surrounding soil becomes saturated, causing effluent to go backwards towards the septic tank causing overflows that leach sewage into peoples homes, yards and into stormwater runoff. 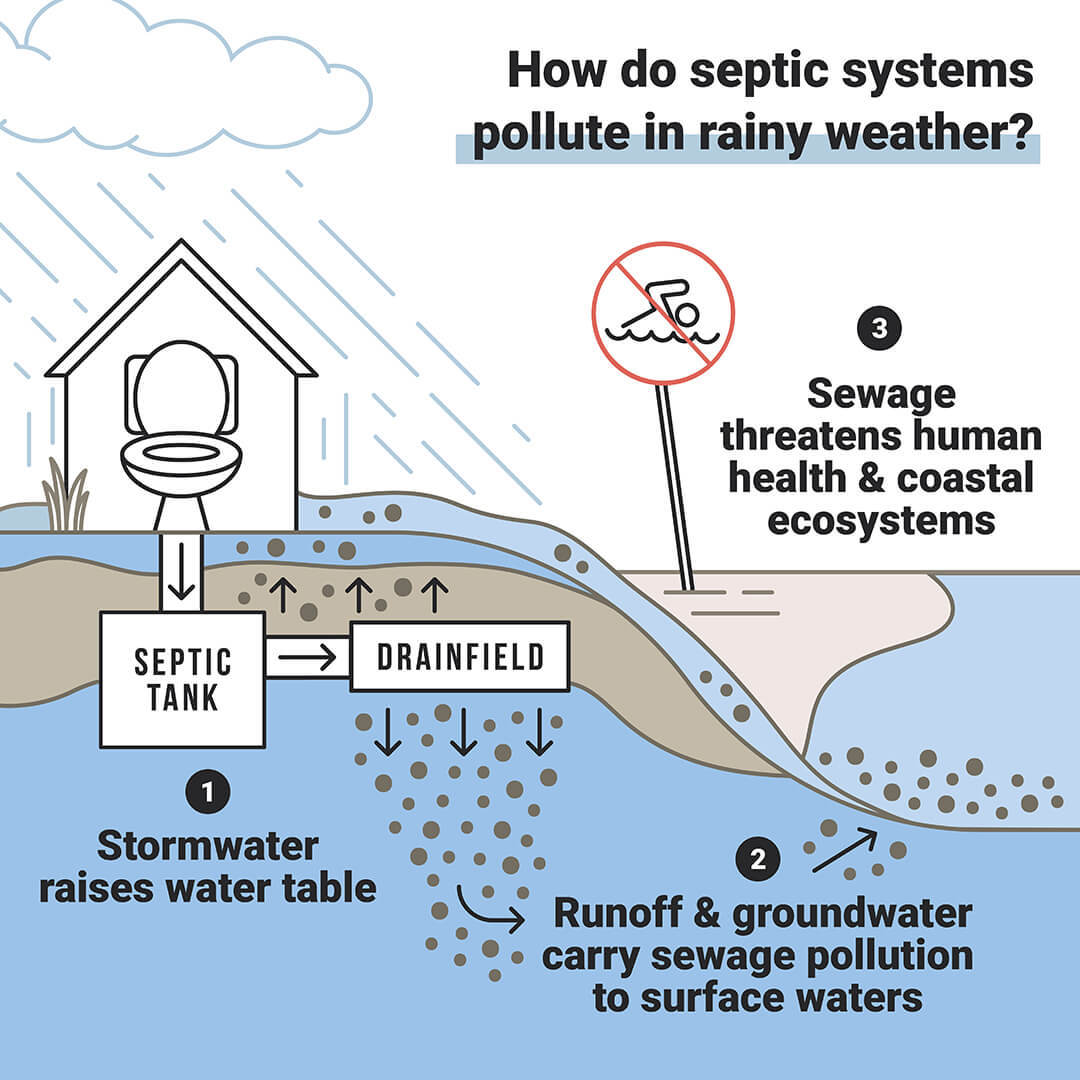 It is during these storm conditions that cesspools not only pollute coastal waters with nutrients that disrupt ecosystem balance but they also put human health at risk by discharging sewage pathogens in recreational waters as well. This is why it is very important not to swim after a heavy rain in communities that are not sewered. Both rising sea levels and increasingly severe coastal storms associated with climate change will cause septic systems and other types of sewage infrastructure to fail more frequently, releasing raw and under-treated sewage into coastal watersheds.

Septic systems that are located close to the beach or surface waterways like rivers or creeks are more likely to put public health imminently at risk than systems located further inland. Many communities have developed management plans to prioritize waterfront zones to maximize the benefits of limited funding for wastewater upgrades. New septic technologies are now available that are able to remove nearly 90% of the nitrogen in wastewater and have shallower drain fields that function better in coastal areas where the water table is usually pretty high. These advanced systems are more costly than conventional systems. Some states and local municipalities offer rebates and tax incentives to encourage homeowners to upgrade their wastewater systems, or require their installation for new construction. Where there is sewer infrastructure already in place or nearby, connecting homes and businesses that are on septic systems to sewers and sewage treatment plants is the preferred option (Septics to Sewers). Better management of stormwater, by encouraging rain to soak into the ground through green infrastructure and low impact development practices is also needed to reduce the impacts of sewage and polluted runoff in coastal communities.