This title comes right out of the local paper on Kaua'i, The Garden Island, and beautifully demonstrates the progress Surfrider chapters in Hawaii have made in their efforts to work cooperatively with the Hawaii Department of Health to better inform the public of polluted conditions at the beach.

Growing out of concerns documented by the Kaua'i Chapter's Blue Water Task Force of several chronically polluted streams on Kaua'i, Surfrider began asking HDOH for more warning signs at the beach.  Read more of the history of this campaign here.  We recieved a major break this summer when EPA's Regional Office directed HDOH to post signs at beaches where measured bacteria levels exceed health standards, regardless of the source.  Soon afterwards, HDOH released their intentions to post warning signs at beaches and started with the highly contaminated Waiopili Stream on Kaua'i and Keehi Lagoon on Oahu where water quality was impaired by storwater runoff.  Previously, HDOH only posted warning signs when there were sewage spills or known human sources (cesspools, etc.) causing high bacteria levels. 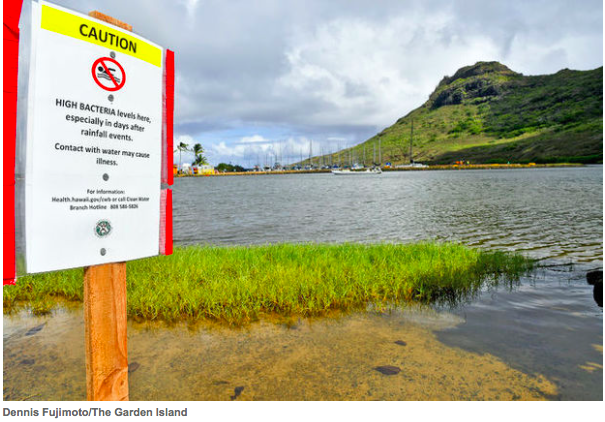 Since August, Surfrider has been communicating with the State on how to best roll out the implementation of their improved public notification program for optimal public health protection.  We have shared our water quality data with the State, indicating which beaches that we test are most often impaired by high bacteria levels.  This has resulted in HDOH posting an additional warning sign at Niumalu County Park on Kaua'i, where Surfrider's monthly test results have shown bacteria levels above health standards every single time it is tested. This park is used by paddling clubs and tour operators as a launch site, and now fortunately people have the information they need to take precautions if they decide to get into the water.   Surfrider and HDOH have also been discussing what information should be posted on beach warning signs and how we can help communicate the risk indicated by the signs to the general public, who are not used to seeing these signs outside of sewage spill events.

Surfrider is very heartened by the intent expressed by HDOH in the recent article in the Garden Island to work together to better inform the public of polluted conditions at the beach.  Proper signage posted where it is easily seen by beachgoers and those accessing the water is critical to giving people the information they need to know where it is safe to get into the water.  Public notification is also the first step in building community awareness of local pollution problems, which then helps motivate government agencies and stakeholders to come together to identify and fix the sources of pollution.  Surfrider advocates for signs to be posted firstly to protect public health, but ultimately to empower local communities to take action to address and solve water quality problems.