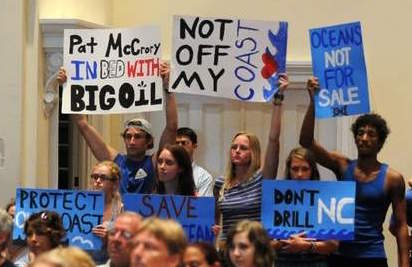 Opposition to new offshore oil drilling continues to grow along the Atlantic seaboard!

Lindsey Deignan, Vice Chair of the Cape Fear Chapter, provided testimony on the issue as one of two featured presenters. Going up against oil industry representative Robert Gisiner, Deignan passionately voiced the concerns of the community, explaining why the impacts and risks of offshore drilling far outweigh any potential benefits (click here to view her testimony starting at 1:28)

Wilmington is now the largest city in North Carolina to pass a resolution against offshore drilling, joining over 60 other communities on the Atlantic coast that have taken similar action. Just up the coast, Surfrider’s Outer Banks Chapter has also helped pass several resolutions and is driving a grassroots movement to oppose the federal government’s drilling plans in the Atlantic.

Meanwhile, Surfrider's Virginia Beach Chapter is organizing opposition, too, having recently launched an online petition asking the Virginia Beach City Council to join local business and community leaders by issuing a formal statement against new drilling off the coast. The council has included this topic on their August 18th meeting agenda, which Surfrider hopes will move the city one step close towards the passage of a resolution.

Such local government resolutions are the antidote to the enormous pressure being applied by the oil and gas lobby. With every new city that takes a postion against drilling, it becomes harder for our federal leaders to justify their plans to bring oil rigs to the Atlantic coast.

The federal government is scheduled to make a final decision in 2016 on this issue. To help stop new offshore drilling in U.S. waters, please visit our Action Center to send an email to your federal representatives.

To read more about Surfrider's grassroots campaign to protect the Atlantic coast from offshore drilling, please check out our recent article: The Next Great Battle.

Major kudos to all of Surfrider’s Cape Fear volunteers, including Lindsey Deignan, Vice Chair; Ethan Crouch, Chair; Kevin Piacenza, Offshore Drilling Campaign Coordinator; and Amanda Jacobs, Volunteer Coordinator. Your work is an inspiration to the rest of us!