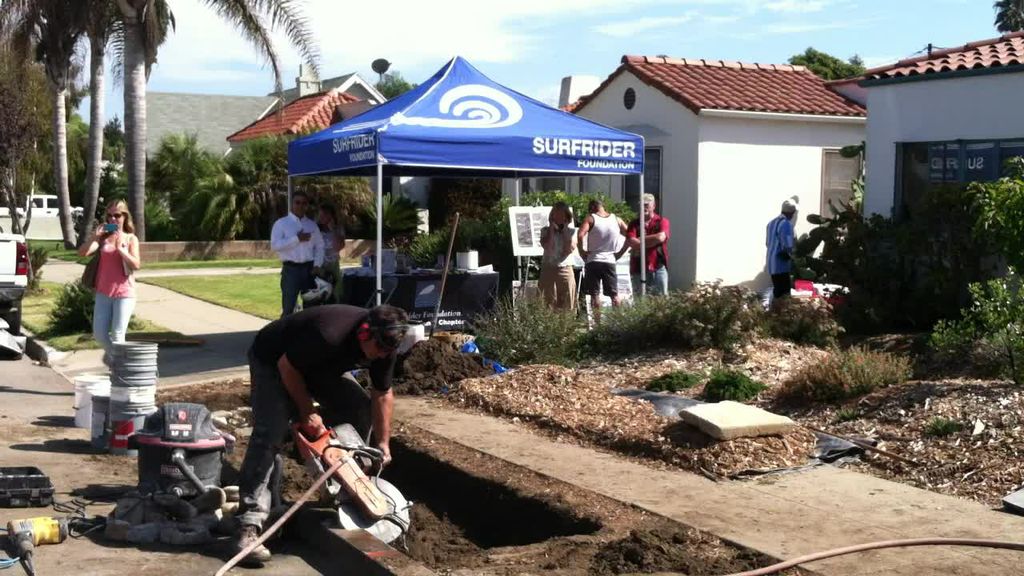 Turning every landscape into an Ocean Friendly Garden is great, but there's still a large amount of polluted water that can run off streets and into gutters and storm drains. Dan Long, whose Ventura, CA OFG retrofit has been blogged about, was ready to cut the curb between his parkway and the street and install a bio-swale to capture, filter and absorb that runoff (the parkway is the landscaped strip that sits between the street and sidewalk). The timing was perfect: do a Hands-On Workshop as part of Surfrider's West Coast Summit so that chapters could take part and bring back home what they learned. 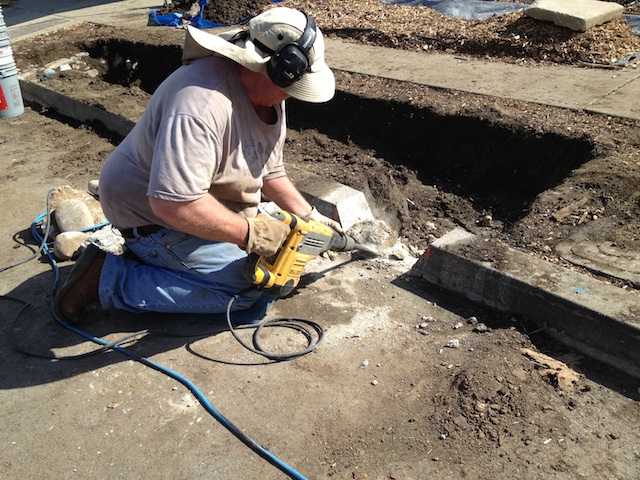 This idea was new to the City of Ventura.  The city did not have a process for pulling a permit for cutting the curb, nor did they have a standard curb cutting design.  OFG Program partners G3/The Green Gardens Group provided pro bono design services to create a standard design. The City welcomed the idea that, if the design worked well, a property owner could pull a permit at no cost as long as they followed the design and used a licensed contractor to cut the curb.

G3's Managing Member, Pamela Berstler, led the G3 team and volunteers through cutting the the majority of the curb and all the bio-swale excavaction from 10am-2pm, while Sufrider activists were sharing best practices at their Summit. Dan's friend, Jeff Zimmerman (pictured at the top, right), owner of the green buildling company Z Dwellings, brought his concrete cutting and cut the curbs for free - and in exchange for some good PR. (Click here to watch a video coverage of the curb being cut and the curb capturing runoff.) Dan had worked with G3's Kate Riley to mark the curbs ahead of time, and had already called Dig-Alert to mark the location of utility lines. 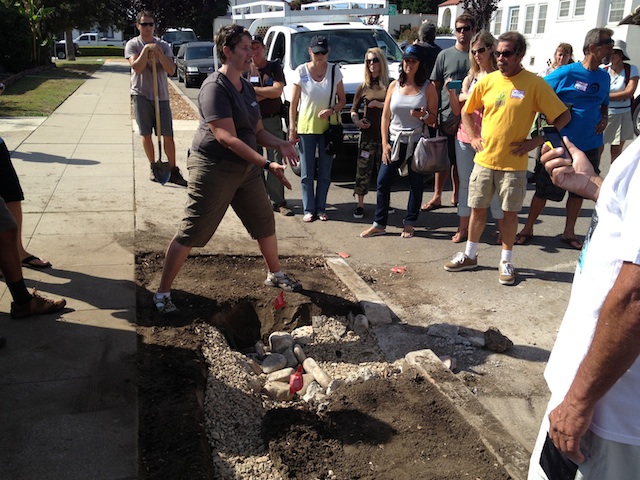 3's research of other curb cut and bio-swale designs from around the county revealed that an open cut at a 45 degree angle would work best for water to flow in and keep debris from clogging the entry. Dan (above, left) used a chisel to ensure a smooth drop from the street into the bio-swales debris catch basin. When activists arrived at 2:30pm, Pamela (at right) explained about the standard design, the collaboration between partners and what had gone on earlier in the day. 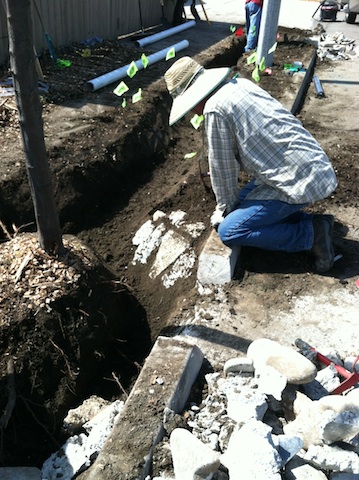 The design centered around creating large basins at the curb cut inlets. The debris catch basin can be seen right in front of Pamela (at right): the gravel just after the curb cut slows down the incoming water and lets debris like sediment from soil, car exhaust and pet waste settle out and sink. The basins were connected by a swale that allows water to flow in and flow out. Tom Rau (at left), with G3 and the West LA/Malibu OFG Sub-Committee, works to reinforce the sides of the basin. Ideas for the basins came from fellow NGOs like Watershed Management Group and activists like Brad Landcaster. (Next time, we would place the curb cut several feet away from the tree so we don't scour away mulch and soil.) 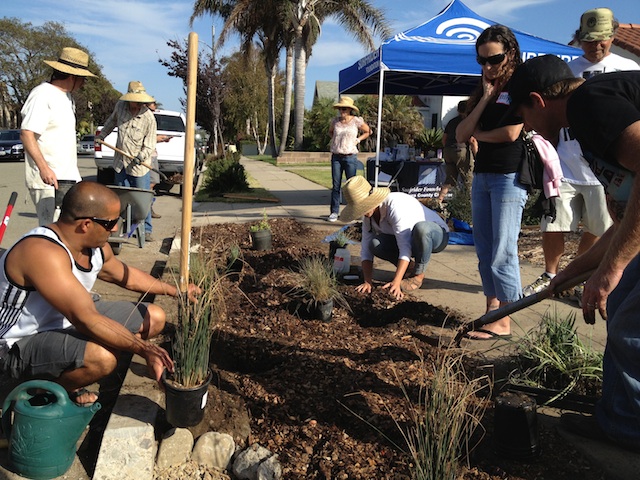 Surfrider activists like Rob Nieto (at left, in white tanktop) from Surfrider-San Luis Obispo, CA got to work, installing plants and laying down mulch. They were joined by the City of Ventura's Water Resources Specialist, Jill Sarick (bending down, in white and big hat, and a big thanks to her for get a City van and driving activists to-and-from the Summit and for the great landscape webpage she created). 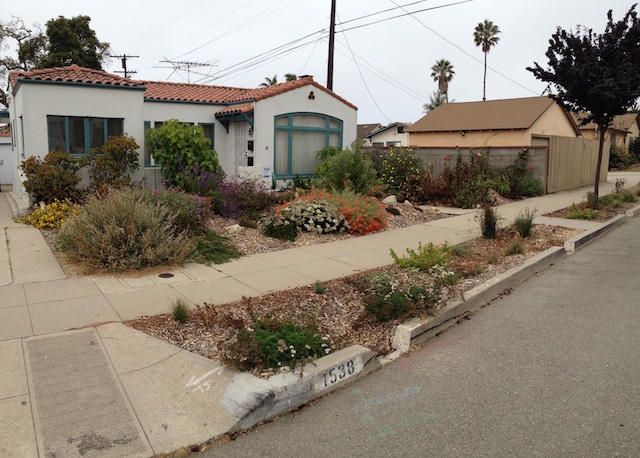 The next steps include: 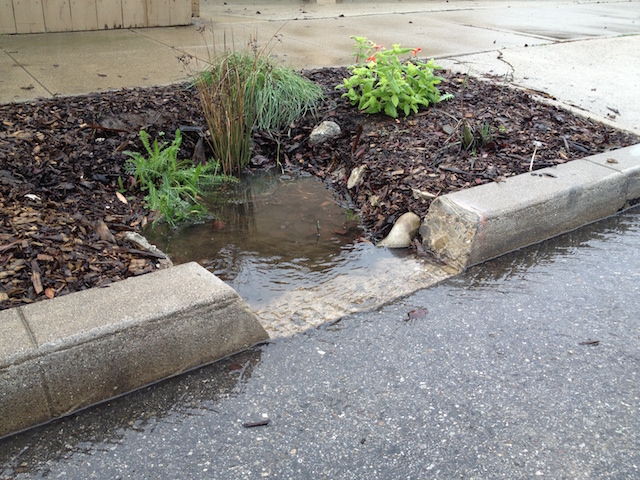 Here's the curb cuts in action, at right!! We got some great press coverage. Kit Stolz wrote a good article about the workday for the Ventura County Star, and the Star's photographer took some nice pictures. John Burke, a landscape architect, wrote a cool piece for the Ventura Breeze (and worked all day at the workday!). Big thanks to Dan Long for his patience and persistence!