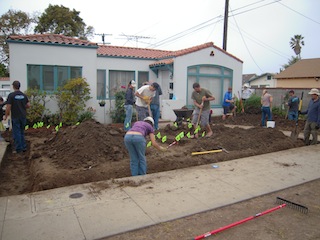 Slightly overcast weather - perfect for working - greeted 30+ volunteers at an OFG Garden Assistance Party (GAP) Workday. The Workday was the next step in the OFG Series, led by G3/The Green Gardens Group. G3 had, in previous months, taken us through an OFG Watershed Basics Class and Hands-On Workshop on Site Evaluation to prepare us for the Workday. We were also joined by a number of landscape professionals who had attended G3's Core Concepts Workshop (CCW, an all-day training). Several were paying forward a scholarship to the CCW that was provided by the grant from the State that is funding the Series. A good-sized turnout may have been partially due to good local press coverage, such as in the Ventura Breeze.

The property owner, Dan Long, had removed the turf grass as part of his list of responsibilities. However, we spent an hour digging and hand-removing new grass sprouts. Doing so, along with trenching near hard surfaces, helps reduce the chances that grass will be a menace when the garden starts to grow in. Plus, we helped to un-compact the soil, helping it to breathe and absorb oxygen. Note: Dan had called Dig-Alert a week before, a free service that marks out all the utilities (they serve Southern California). 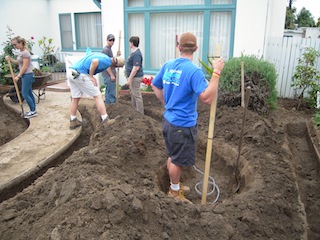 Next, we got to digging out the areas for the swales, which were marked off by bright-green-colored flags laid. No soil left the site: what was dug out was used to create mounds. A water level created in ancient Egyptian times, called a bunyip (two measuring sticks connected by a tube filled with water), was used to insure that the swale flowed away from the building's foundation (pictured at right).

Two young, upbeat employees from a local irrigation supply store named Aqua Flo helped lead the charge on using the bunyip and on retrofitting the rain gutter downspouts into the swales. 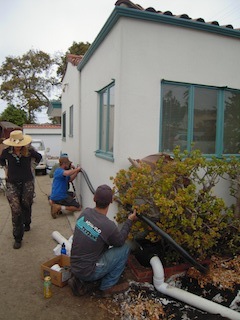 One downspout collecting water from the roof on the front side of the house dumped water onto the driveway and through a circuitous path to the back of the property. It was directed to one of swales. The other downspouts will have the same done to them. Parts were purchased from Aqua Flo.

While that was going on, we sheet mulched the yard: a lasagna-like soil enliving process. Here are the steps: apply a thin layer of compost or compost tea; water the area; lay down paper, and water; spread on a thick layer of mulch such as fresh tree trimmings - including the leaves because organic materials is essential. The City's Water Conservation Coordinator, Jill Sarick-Santos, made special arrangemens for a load of mulch from the City. Jill also worked with the City's Parks Manager to provide us with a bunch of shovels and metal rakes! (Jill has posted OFG-related info on the City's website,too.) 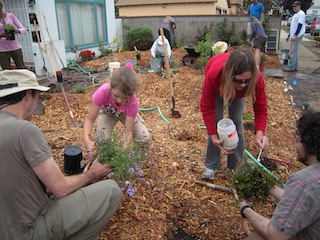 Then we got to planting. Successful planting involves a few steps to prevent plant shock: watering the hole into which it is planted twice; emerging the plant into a bucket of water till the bubbles stop; watering after it is planted; then watering again. The plants were purchased from a local native plant nusery named Nopalito.

Beneficial fungus called mycorrhizae was applied to the root ball prior to planting. Fungi play a key role in plant health, acting like a sub-terranean internet to transport water and nutrients. Soil in a typical landscape is devoid of oxygen and water, necessary elements for aerobic (oxygen-loving) life. The OFG soil-prep regimes helps to awaken the lower rungs of the soil web - bacteria - which then are munched on by protozoa, nematoed and - your guessed it - fungi. 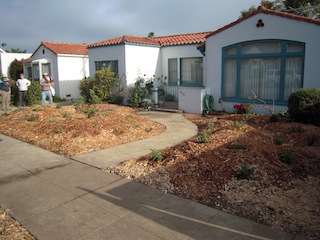 Dan was awarded an OFG yard sign by the City (they have purchased 100 to give out for free to those that meet the sign criteria). We were visited by local State Assemblyman Das Williams, as well as a local City Councilman Carl Morehouse. At the end of the day, with plants in the ground and everything cleaned up, we were welcomed by the sun. Dan, a member of the executive committee of the Midtown Ventura Community Council, shared some next steps:

Taken together, these are parts of a vision that Ventura OFG Sub-Com't Chair, Cynthia Hartley, and Ventura Surfrider Staff, Paul Jenkin, have developed plans for and have become a model for the larger Surfrider network (see a recent blog post about it). We will retur

n to the OFG in the coming months for a neighborhood walk (aka, Lawn Patrol).

The Series has been funded by a grant from the California Coastal Commission's Whale Tail License Plate Program.