Chris Harris, Director of Legislative & Political Affiars for the National Border Patrol Council, explains the horrific conditions his agents work in at the Tijuana-South Bay border, during a tour with Surfrider staff. Video by Pete Stauffer, May 2018.

The pungent, salty air that emerged over South Bay communities last February was not a familiar whiff of wrack decomposing on our favorite beaches. In fact, it was the estimated 143 million gallons of raw sewage that raced down the rugged canyons of Tijuana, funneling directly through the mouth of the Tijuana River into the Pacific Ocean. Beachgoers, visitors, and residents of San Diego County have suffered the devastating effects of these spills for decades—yet little has been done to remedy the origins. The perpetual disaster has direct, negative consequences on our local economy, tourism, marine life and growing public health concerns for residents of San Diego County. A problem that has remained dormant for many years has come into the spotlight in recent months due to the direct effect it is having on US Border Patrol Agents and, consequently, our national security. 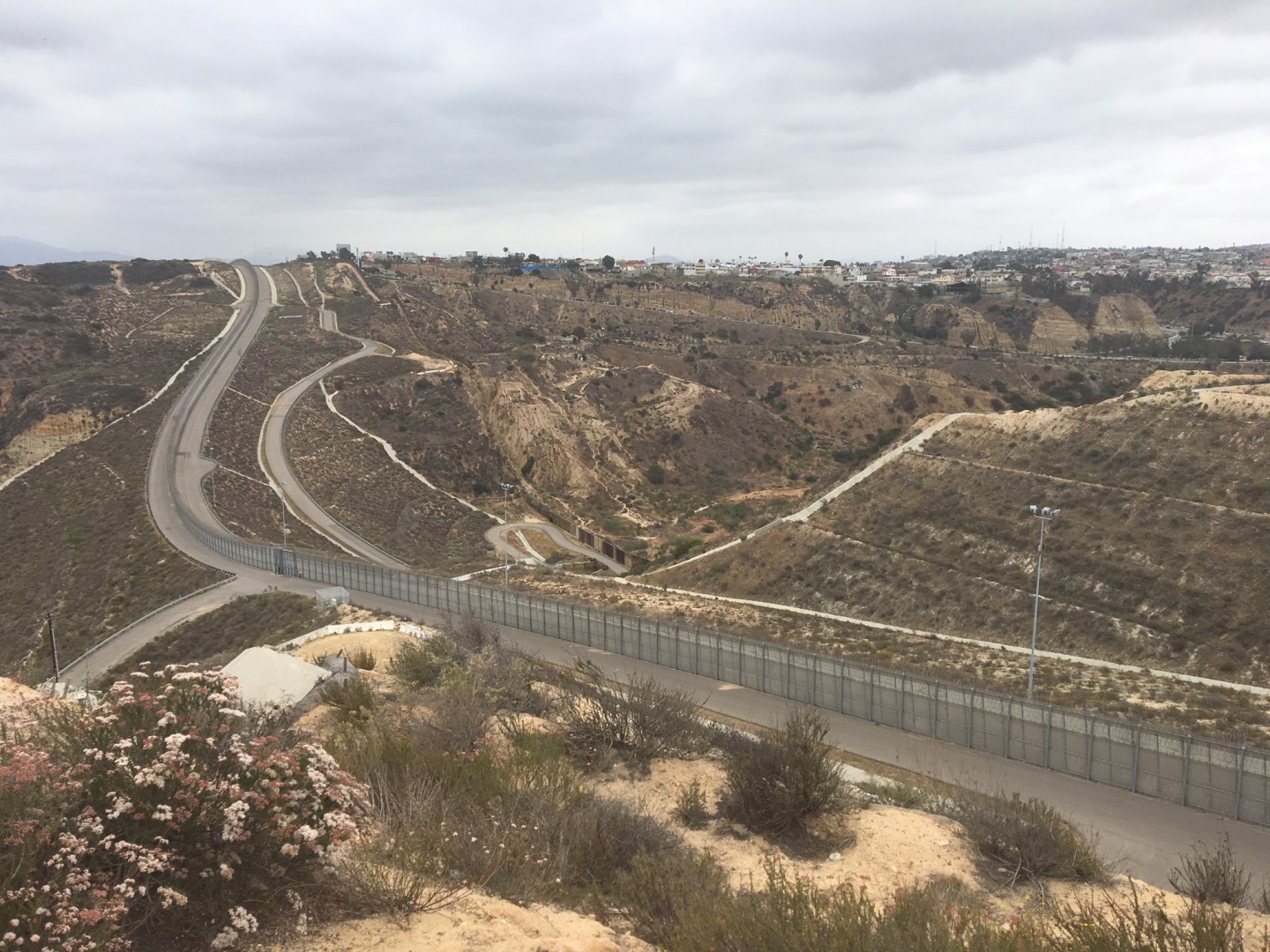 Segment of the US-Mexico border fence weaves across the Tijuana River Valley.

A trip to the Tijuana River Valley with Public Lands Liaison Agent, Amber Craig, Supervisory Border Patrol Agent, Bill Rogers, and the Secretary and Director of Legislative & Political Affairs for the National Border Patrol Council, Chris Harris, was indicative of the devastation to the area. Conditions were far less than ideal for the agents working in the Tijuana River Valley—and even worse for those without homes living amidst the sewage and rubbish on either side of the border. Nauseated daily by foul smells and constant exposure to toxins, metals, and raw sewage, many border patrol agents have been concerned about long-term health complications. In fact, some agents are keeping daily health records to document their respiration disturbances and rashes. Even cases of Hepatitis A, MRSA, and flesh-eating bacteria have been linked to exposure in the South Bay. 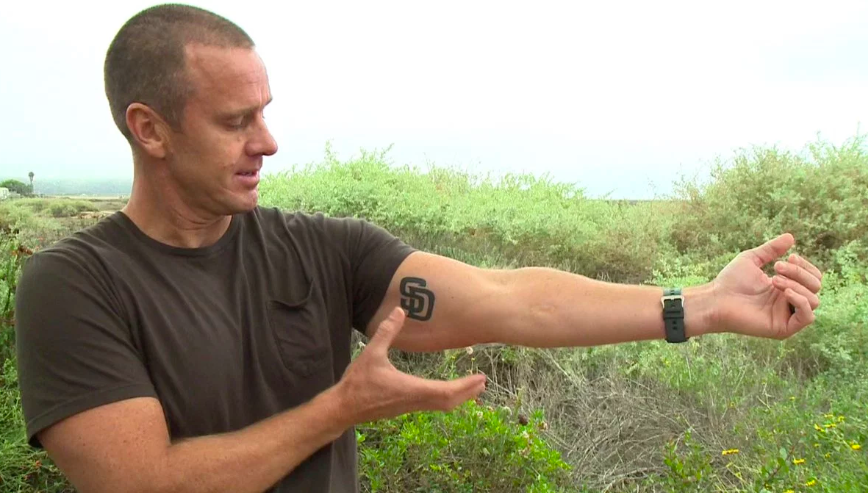 Former Border Patrol Agent, Joshua Wiley, recalls symptoms of the necrotizing fasciitis—a flesh eating bacteria— he contracted in 2010 from the contaminated waters off of Coronado during training.

In fact, Joshua Willey, former Border Patrol Agent, was permanently disabled due to a flesh-eating bacteria he contracted in April 2010, while training in the waters off Coronado after a heavy rain. At the time, Joshua assumed that he had an overuse injury due to rigorous physical training. Perseverance and determination kept Willey from being sent home, since this type of training was meant to clear some agents out. By day 11 of a 30-day intensive academy, Willey said “the pain got worse and started spreading down into my arm, and down in my chest area. I woke up in the barracks confused, with night sweats, the shakes, and didn’t feel right.” The next day, Willey was sent home and went straight to bed. He woke up later that night to use the bathroom and ended up on his floor—after suffering a febrile seizure. He was transported, by ambulance, to the hospital, where herecalled his arm swelling to “the size of a volleyball.” Doctors told his family that his arm may have to be amputated, but was fortunately avoided after a successful emergency surgery.  After his operation, and a series of blood tests, it was revealed that he contracted necrotizing fasciitis—a flesh eating bacteria—from the contaminated waters off of Coronado. 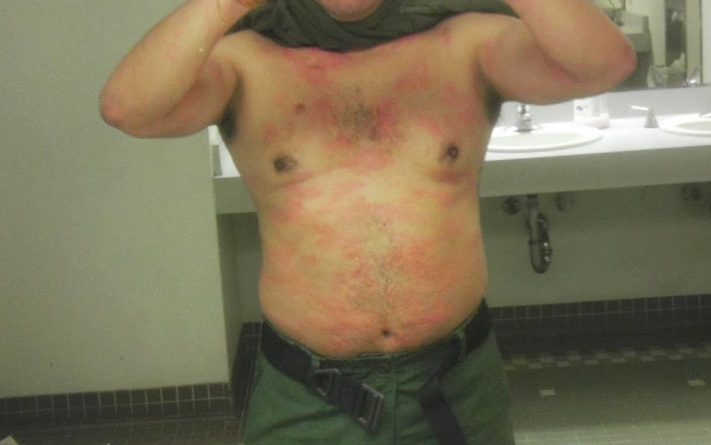 Another US Border Patrol agent shows a rash expected to be from contaminated water exposure.

Border Patrol Agents have taken precaution in some areas along the international border. “Many of the agents are told not to bring their boots and gear home.”  Said Craig. This is an effort to mitigate the possibilities of exposure to the families of the agents. At times, agents now wear face masks and gloves to protect themselves from the exposure to the hazardous waste. Craig noted that holes have burned through the soles of agent’s boots and gloves in recent months, and agents are breaking out in rashes. “Whatever is in the water is damaging and eating away at our agents boots. There appears to be chemicals or something in the wastewater.”

Water quality testing commissioned by US Border Patrol San Diego Division measures the level of fecal contamination in the wastewaterthat agents come in direct contact with, and the results are horrific. The Tijuana River bacteriological results from May 2018 (below) indicate levels of fecal indicator bacteria, E. coli, and fecal coliform that are literally thousands of times higher than national recreational exposure standards.

Water quality test results from May 1, 2018, provided by the Public Lands Liaison of the US Border Patrol, San Diego Sector.

Border Patrol Agents knew the potential threats and inherent risks of guarding our country’s Southern Border when signing up for training. “We could be shot at, get into a high speed chase, but didn’t really sign up to be at risk from raw sewage.” Noted Craig, With the warmer, summer months approaching, more threats to the agents are going to be lurking in the lowlands of the Tijuana River Valley. Mosquitoes spawning in this sewage present considerable health suspicions to Customs Border Patrol and the Public Health of San Diego County and beyond, as mosquito-transmitted viruses include West Nile, yellow fever, dengue and Zika.

In addition to the health risks of contaminated water exposure, trash and debris wash down the Tijuana canyons during storm events, causing these strems to send sewage, chemicals, and solid waste into the marine environment. Gates and border walls can act as collection points for trash. To prevent flooding, agents are forced to open the gates of these collectors when it rains, leaving the busiest international border access in the world, open to possible dangers and risks. 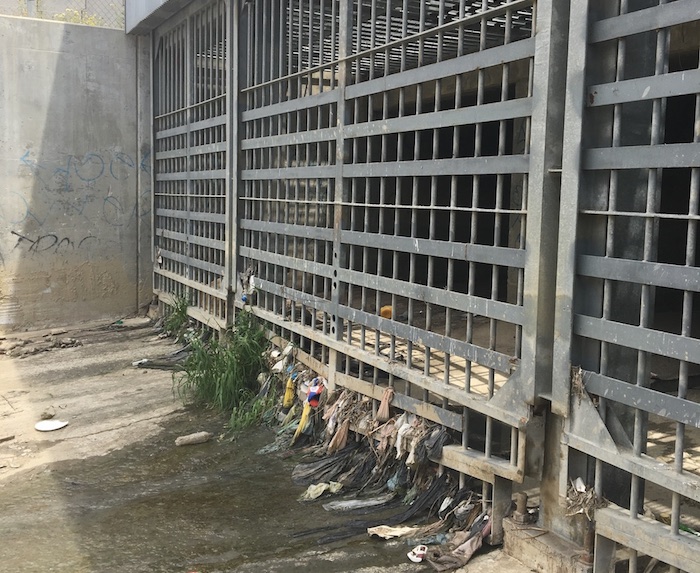 Trash and debris collect at a border fence.

Many residents, especially those in the South Bay communities, are longing for a solution to this enduring problem. Amber Craig, who has been with U.S.C.B.P for two decades, says that spills have been an issue for as long as she has been there. I asked her about a possible solution, since she is an expert on the crisis:

“All we can do is put a Band-Aid on it. The real problem is there is not a Band-Aid big enough. These problems keep getting bigger and bigger. It is going to have to happen at very high levels of government.”

On May 15, Surfrider Foundation San Diego sent the US International Boundary and Water Commission (USIBWC) a Notice of Intent to Sue for repeated violations of the Clean Water Act. The International Boundary and Water Commission (IBWC) is the federal agency with the jurisdiction over transboundary flows of waste. Lack of foresight, management, leadership, priority and diplomacy has resulted in an IBWC that has not been proactive. Their stance is “we cannot do anything about it.” However, they have also not yet considered the options or costs involved in mitigating contaminants that cross the border, or cleaning up when they happen. The EPA is launching a diagnostic of possible solutions as a result of the February 2017 spill that should be completed by November. However, the IBWC should have been engaging in these sorts of diagnostics for the last decade.

If you would like to support Surfrider Foundation’s efforts to address the toxic water crisis, please consider making a donation to our Clean Border Water Now! Campaign. Your support will help advance policy, expand our water testing in the region, and broaden our community outreach to drive awareness and inspire action.