San Onofre Nuclear Generating Station, referred to as SONGS, is in the process of decommissioning as a result of the plant leaking radiation back in 2012.  Last week, there was a Community Engagement Panel (CEP) in Oceanside that addressed some of the most pressing questions related to the plant’s decommissioning.

SONGS is located just 100 feet from the shoreline, on a receding bluff, near a fault line, on the outskirts of the coastal surf town of San Clemente, yards away from world renowned surf breaks, next to one of the nation’s busiest freeways, and within roughly 50 miles of the densely populated City of San Diego.

During its years of operation, SONGS generated about 3.6 million pounds of nuclear waste. Roughly one third of that waste is already in an onsite dry storage system, while the rest remain in cooling pools. As of last month, the operating utility company Southern California Edison (SCE) completed construction of another outdoor dry storage system, this time designed by Holtec International. The new dry storage system is approved to store waste onsite for 20 years. SCE plans to start loading spent waste as early as December 2017, and be completed with the full transfer by mid-2019.

The Surfrider Foundation is opposed to permanent or long-term storage of radioactive waste at the recently deactivated San Onofre Nuclear Generating Station. We are actively engaged in advocating to remove the waste as quickly as possible. We are also mindful of where the waste will get transferred, and seek to find a consent-based, geologically stable, inland repository for nuclear waste. Surfrider submitted comments and inquiries posed at last week’s CEP, and SCE has confirmed that they are working on responding to our inquiries. We will continue to attend San Onofre CEP’s and work with local organizations, municipalities and federal representatives to get nuclear waste off the beach.

Local communities are understandably concerned. The outdoor storage system is in a highly corrosive environment, on an unstable shoreline, and designed to use thin canisters instead of thick casks. Additionally, the Safety Evaluation Report for the storage system was prepared to operate as a fully underground system. Instead, SCE constructed (with the Nuclear Regulatory Commission’s approval) a partially buried version without the manufacturer completing an updated Safety Evaluation Report. 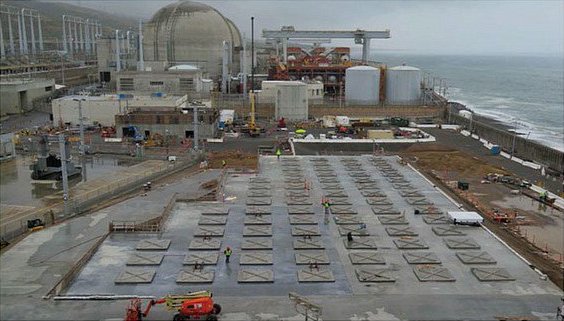 To address these concerns, SCE and the San Onofre CEP focused last week’s September 14 meeting on the storage system’s redundant safety mechanisms, known as the “Defense in Depth”. Unfortunately, this presentation did little to ease concerns.

Presenters discussed the manufacturers updates to the storage system, including improved weld areas to reduce stress and increased canister thickness from ½-inch to ¾-inch. Insurance changes, timelines, and types of monitoring mechanisms currently in development were also presented. But overall, very little detail was actually provided on how SCE will conduct monitoring, remediation, and maintenance of these canisters.

This is because SCE doesn’t plan on addressing these issues until they develop an “Inspection and Maintenance Plan”, which is not required until 2020. That’s almost three years after the nuclear waste would be transferred into this storage system.

In the meantime, SCE would only be required to monitor canisters with radiation sensors (not on each canister) and visually assess the concrete overpack. If a flaw is identified, SCE plans to obtain a more thorough monitoring device to inspect the actual canister. In the past, this device is a robotic camera able to access and move around the exterior of the canister. The monitoring device for this specific storage system, however, is still in development. All in all, the meeting on the Defense in Depth was held too soon, since it is not yet developed, and won’t be before waste is transferred to canisters and placed at the beach.

There was strong community engagement, with over 70 public comments and inquiries. Most of the comments addressed concerns over the use of thin canisters, the ISFSI’s exposure to coastal hazards and sea level rise, why SCE isn’t developing an Inspection and Maintenance Plan prior to placing canisters in the ground, and how increased security is important to the communities.

As a push to reduce the amount of time waste is stored on the beach, the local organization Citizens Oversight Committee, joint with Patricia Bormann filed a lawsuit against the California Coastal Commission and SCE. The lawsuit resulted in a settlement in which SCE agreed to spend no more than $4 million to take “commercially reasonable” efforts to relocate the waste to either a Consolidated Interim Storage Facility, like the two currently under NRC review in Texas and New Mexico, or to a dry storage facility at a nuclear power plant in Arizona. The Arizona plant, Palo Verde, is partly owned by SCE, but has been vocal about not accepting waste from SONGS or getting certified by the NRC to store another facility’s waste.

As of now, 21 previously loaded canisters would be ready for removal offsite today. If the rest of the waste is transferred to dry storage canisters as planned, all waste (123 canisters) could be transported offsite by 2030. To note, time lags are due to cooling requirements since even nuclear waste (spent fuel rods) emit an extreme amount of heat.

The settlement also requires SCE to establish a panel of experts to advise SCE on relocation issues, the development of a Transportation Plan if an offsite location gets identified, and development of a Strategic Plan to help get the offsite location certified and able to accept SONGS waste. It is worrisome that “SCE shall retain discretion to select and manage the Experts Team” and that there is no definition of expert provided in the settlement.

The settlement did not require any changes to the Holtec dry storage system, and SCE is proceeding as planned: however, it did move up the development of an “Inspection and Maintenance Program” from the initial requirement of 2022 to 2020, and required SCE to provide monthly progress reports on the storage of spent fuel starting January 2018.

Here’s how you can get involved: