What’s the Score on Plastic Pollution Laws and Preemption of Local Ordinances?

The battles to protect our beaches and ocean from ubiquitous plastic trash have culminated into a global movement against plastic pollution. However, the plastics industry has fought back with sophisticated legislative manuevers such as state preemption of local plastic reduction laws.  The industry, including chemical giants and packaging companies, has pumped millions of dollars into lobbyists, lawsuits and pro-plastic marketing. A key tactic in their strategy has been state preemption; whereas other states are battling plastic pollution with statewide reduction laws.

In 2019, Tennessee, Oklahoma and North Dakota fell to statewide preemption.  The state took away the right for cities and counties to pass local plastic pollution ordinances, preventing home rule to protect local communities and the environment from harmful plastic litter. However, the number of states that defended against these bad preemption laws was even higher, with notable wins:

In positive state plastic pollution reduction news, both Maryland and Maine have banned expanded polystyrene foam foodware this year!  New York passed a state bag ban (although it requires cities to add the fee on single-use paper bags), and plastic bag laws are still in play in Connecticut, Maine, Massachusetts, Oregon, and Rhode Island state legislatures.  There is also a comprehensive plastics bill in Vermont sitting on the Governor's desk for signature that will ban plastic grocery bags, foam and require that vendors provide straws upon request only.

The following map gives a good overview of where things stand in the United States: 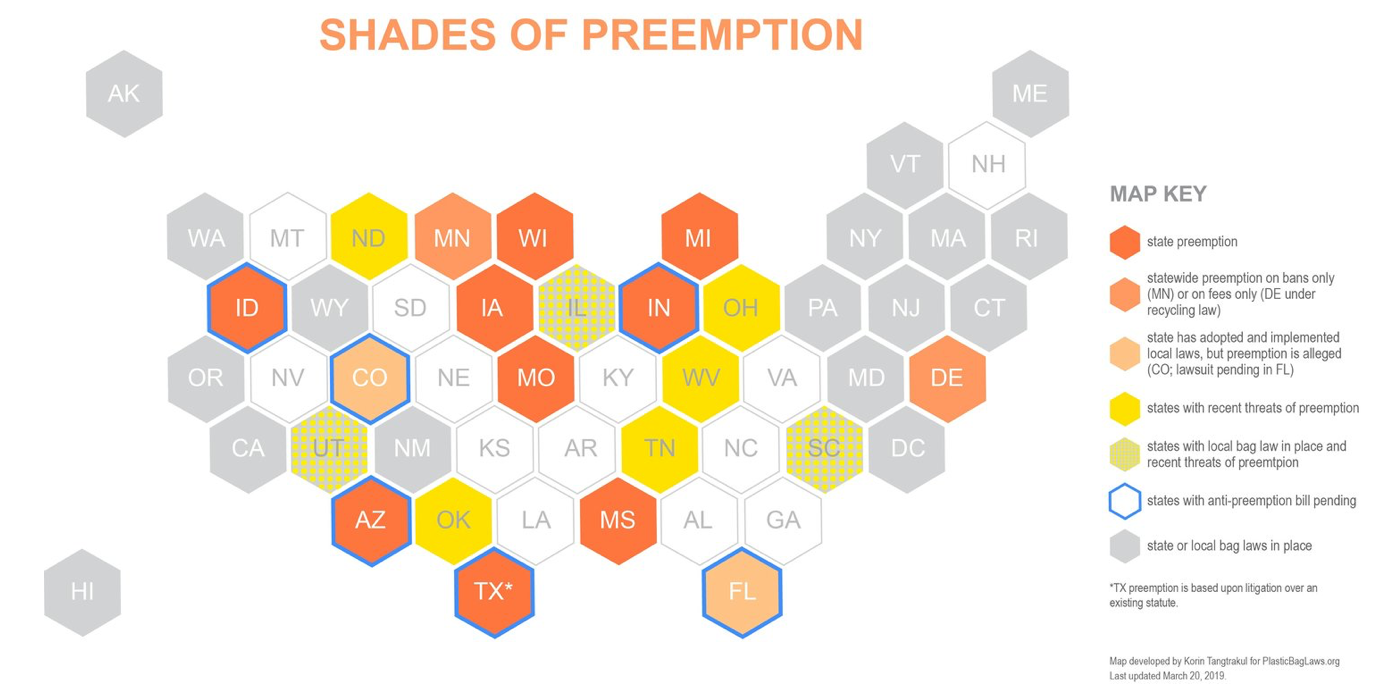 A complete list of current preemption legislation can be found here.

While many legislative sessions have wrapped up for the year, we expect there to be preemption pushes and repeal battles in the coming years, as well as more local, state, national and global movement for positive plastic regulation.

If you'd like to plug in with the grassroots movement in the positive direction to address plastic pollution, you can join a Surfrider chapter or club today!