January 2019 kicked all six New England state legislatures into high gear but it was not just business as usual this year: all six states featured proposed single-use plastic bag ban bills, and all with highly varied policy mechanisms.

Following Hawaii's groundbreaking county-by-county state bag bans, with the final of the Aloha State's five counties passing its law on May 14, 2012, thereby covering the entire state with local bag mitigation laws, California then set the stage in 2016 as the first in the nation to pass a unified state law to regulate single-use plastic bags. With the Surfrider CA Chapters and partner coalition led victory with the passage of Prop 67, other states had a solid target for which to aim to meet the grassroots demand for mitigating pollution from checkout bags, as well as the business community call for standardized business practices at the state level, rather than the continued patchwork of distinct local bag regulations town-by-town.

After New York State fell short of setting good precedent as the second in the nation to pass a statewide bag law, despite the valiant efforts of our Surfrider NY Chapters and partners, worries about bad precedent flooded the Northern Atlantic and rippled across the U.S. when Maine's proposed bill failed to address proper incentivization of reusable bags by requiring a fee on the allowable 4 mil plastic film bags, and bill sponsors were unwilling to budge to make the necessary amendment. Fortunately, the Surfrider Maine Chapter was successful in championing the needed change in public hearing, and the Environment and Natural Resources Committee adopted the amendment before passing the bill favorably onward to the chambers. On June 17, 2019, Maine Governor Janet T. Mills signed the law into effect, making Maine the third in the nation to enact statewide bag law. The law preempts local bag regulation at the time that it goes into effect on April 22, 2020, banning all single-use thin film plastic bags under 4 mils and requiring a fee of at least 5-cents for all single-use paper and plastic film bags at/over 4 mils, with limited exceptions for certain entities that are explicitly authorized to opt into the fee structure but are not mandated to assess fees.

Our New Hampshire Chapter worked hard this year to break a cycle of inaction on single-use plastic regulation, given that the state does not have home rule and so towns need explicit authority from the State in order to pass local laws. This has long stymied local efforts in Portsmouth, as the city attorney has historically advised the council not to pass a proposed town ordinance to ban plastic bags due to the lack of explicit authority in the state's 149-M regulations. Surfrider holds that the state's solid waste regulations already grant this authority, and we have attempted to try to clarify this authority since 2014. 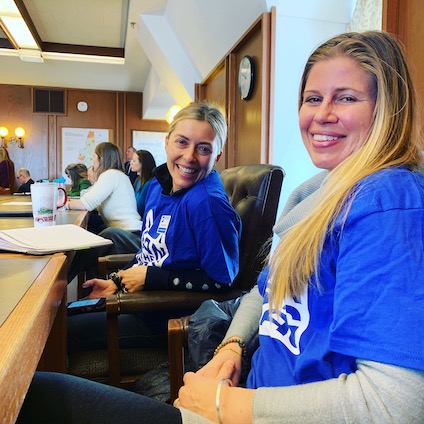 This year's state bills HB559 and HB102 were both proposed with the aim to grant municipalities the explicit authority sought by towns, and both were retained by the House Municipal and Public Affairs Committee in March pending the outcomes of HB560, the proposed state bag law.

HB560 would have banned single-use plastic checkout bags under 4 mils and required a 10-cent fee on all paper and 4 mil + plastic film bags at point of sale. Unfortunately, while the bill passed the House on a vote of 201 to 145 on March 19, 2019, it failed to pass the Senate and is now dead. The silver lining in New Hampshire is that on June 25, 2019, the Municipal and Public Affairs Committee is advancing a combined bill incorporating the policy mechanisms of HBs 102 & 559, and bringing them forward as HB559 in a renewed effort to exempt regulation of single-use items from home rule and thereby allow towns to regulate single-use bags, expanded polystyrene and straws. Surfrider has won with this strategy across the US, building grassroots support by passing local bag laws to then trigger state law, and while we were disappointed that New Hampshire's Senate failed to take this opportunity to lead by example and learn from the dozens of other bag ban campaigns by skipping the local laws and going straight to a good statewide law, we will continue to help champion this effort until we find success in the Granite State and are optimistic that the enabling legislation will be successful.

In stark contrast, Vermont, another non-home rule state, took a highly efficient approach this session by passing a comprehensive suite state law that not only regulates single-use checkout bags but also institutes a straws on demand policy, and a ban on expanded polystyrene foam products!  This paradigm shifting state legislation was course-corrected in deliberations to ensure that the proper fee mechanisms to incentivize consumers to opt for proper reusable bags were in place, and is now a shining example for states across the nation to follow, putting Vermont on the books as the fourth in the nation to pass a statewide bag ban, signed into law shortly after Maine's law, on June 17, 2019. The law takes effect on July 1, 2020, and the bag specifications will manifest a ban on all thin film plastic bags and require a fee of at least 10-cents on all paper bags.

While the strong Massachusetts bag ban bill came to public hearing on April 2, 2019 with the robust leadership of our Surfrider MA Chapter and their coalition partners, as of the writing of this blog the Environment, Natural Resources and Agriculture Committee has yet to release its report. The report will determine any amendments as well as the next steps and future of that proposed law, which as written is slated to ban all thin film plastic checkout bags after 8/1/19 while instituting a mandatory 10-cent fee on paper bags and a minimum 10-cent fee on reusable bags with stitched handles. Prior to 8/1/19, the law would allow the sale of plastic film bags for 10-cents.

Just to the South in Rhode Island, lawmakers are grappling with resolving conflicts between the House and Senate version of their state bag legislation, where on June 6, 2019, the Rhode Island Senate unanimously passed S. 410 sub A to ban single-use plastic film bags by defining “reusable bag” to require stitched handles, which necessarily bans plastic film bags that are made with fused handles. However, on the same day, the House Committee on Environment and Natural Resources passed H. 5671 sub A, which would allow plastic film bags of 4 mils or more to be considered reusable and given out for free. Unfortunately, neither version of this bill would require the necessary fees on single-use paper bags to properly incentivize reusable bags, and so the proposed law falls short of expectations for good bag policy and would preempt local bag laws.

Finally in Connecticut, where no fewer than twenty-one single-use bag bills surfaced this session (!!), our Connecticut Chapter had crafted a beautiful bill in collaboration with other environmental partners and the Connecticut Food Association, but the Governor and the General Assembly had other ideas in mind. After much debate the bill that wound up passing both chambers on June 5, 2019 as part of the state budget bill and is on its way to Governor Lamont for signing, falls short of good policy because it does not mandate fees on paper bags and plastic film bags thicker than 4 mils, and so will not properly incentivize reusable bags. However, because of the fast and efficient activist community we are proud to be a part of in Connecticut, we were able to help diffuse the worst elements of the initially proposed budget bill section 355 that would have erred in allowing bioplastic bags to replace plastic checkout bags, and failed to mandate fees on paper while preempting the many excellent local bag laws in the state. Local bag laws are now safe, and while the state law still fails to mandate fees on paper bags it will allow localities to opt in to fee structures to properly incentivize reusable bags. Additionally, the state law phases out all thin film plastic bags under 4 mils from a period between August 1, 2019 and June 30, 2021, mandating a 10-cent fee on those plastic film bags in the initial period before phasing out to a ban. However, plastic film bags that are thicker than 4 mils remain unregulated and with no fee requirement, making this state law subpar. Because we helped with the successful push to remove the preemption clause, our Connecticut Chapter will be able to continue to work with towns across the state to address thicker plastic film bags and paper bags with fees, which we know work to get at our goals of source reduction for plastic and properly incentivizing reusable, non-plastic film bags. This local activity and monitoring and evaluation programs for the state law will hopefully help us build the case for support to amend the state bag law in a future legislative session.

As more and more states consider single-use checkout bag mitigation laws to help achieve local solutions to the global problem of plastic pollution and incentivize a consumer paradigm shift away from single-use and toward more sustainable reuse, attentions in the Northeast are starting to shift toward leveraging municipal level campaigns to regulate other single-use plastic consumer items as well as to turn the tides on another significant source of plastic pollution, resulting from derelict and ghost fishing gear. Eventually, our hope is to have enough state law on the books to tackle single-use and commercial plastic pollution that the case for support of a sound federal law is triggered, leading our nation toward being a global leader in plastic pollution solutions.

In the meantime, coastal and inland states alike are pressing for more bold regulation, including in the Mid-Atlantic state of Delaware, where a statewide plastic bag ban has passed both chambers and is on its way to the Governor for signing, but failed to address paper, inspiring one lawmaker to introduce a bill that seeks to ban single-use paper bags in the state.

This is an exciting time for plastic pollution mitigation, and all of us here at the Surfrider Foundation are full speed ahead, and with your continued support, we will keep winning big for the ocean, waves and beaches we all love. Thanks for doing your part to help!