Americans love the beach. Over 100 million beachgoers flock to U. S. beaches every year to enjoy the sand, sunshine and water. Despite this, coastal water quality continues to be threatened by discharges of stormwater and sewage. Years, decades even, of neglect, have left America’s wastewater infrastructure in disrepair, outdated and failing. Many older cities are serviced by combined sewer systems that collect sewage and stormwater through the same pipes. Unfortunately It takes only a small amount of rain, as little as 1/10th of an inch, to overwhelm these systems and cause overflows to discharge untreated sewage into local waterways.  Across the US, Combined Sewer Overflows (CSOs) release 850 billion gallons of diluted sewage into surface waterways every year!

Join us and ask Congress to invest in upgrading America’s failing sewage infrastructure and to protect our coasts and our communities. Send your email here.

This blog post is the fourth in a series that explains how the most commonly used wastewater systems fail and pollute our coastal watersheds and the ocean with sewage. View Part 1: cesspools, Part 2: Sewer Spills & Failures, Part 3: Septic Systems

Combined sewer systems were installed between the 1850s and 1950s to manage stormwater runoff and wastewater in urban areas. Most were installed before cities started treating their sewage at all, and a combined system seemed the most efficient way to get both types of nuisance water out of the urban area. Today, combined sewer systems collect both sewage and stormwater through the same network of pipes and carry it to a sewage treatment plant. The treated effluent is then released back into the environment, often into a nearby waterway. In theory this may seem like a good idea because both sewage and stormwater are treated before disposal, unlike separate sewer systems that most cities use to treat sewage only. Over the last century, however, both population growth and increased development in urban areas have contributed to greater flows of sewage and stormwater that exceed the capacity of combined sewer systems. In order to avoid sewage from backing up into the streets and people’s homes during rain events, combined systems were designed with bypasses that allow sewage and stormwater to flow untreated into nearby waterways. These spills, or overages, are called Combined Sewer Overflows (CSOs). 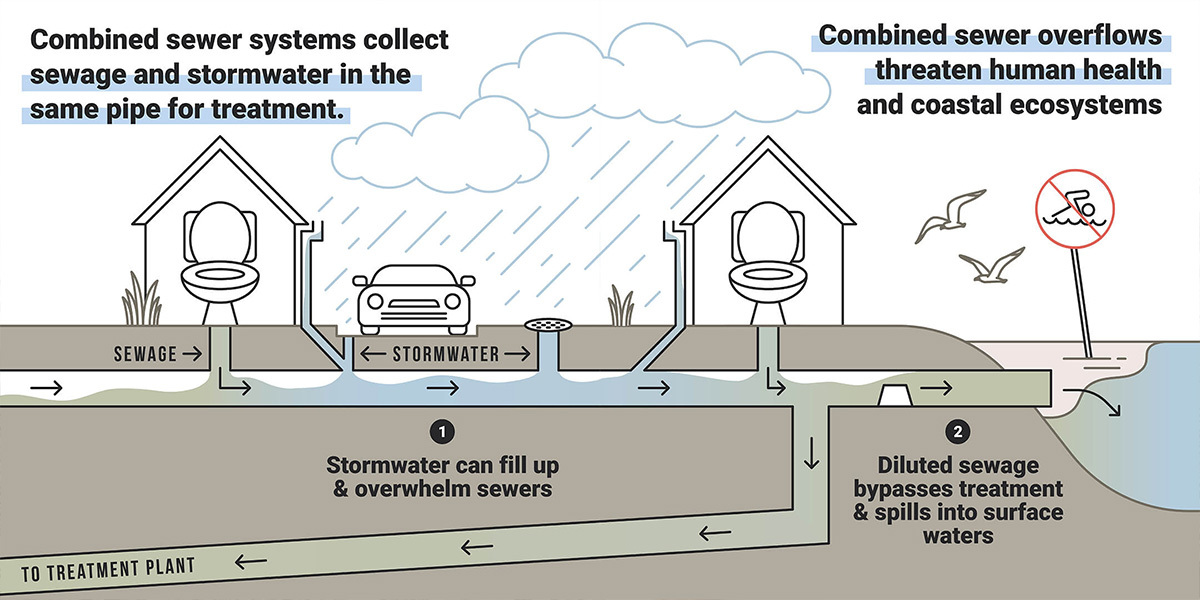 Approximately 772 communities and 40 million people are serviced by combined sewer systems, mostly in older cities in the Northeast, Great Lakes and Pacific Northwest. These systems are easily overwhelmed causing over 40,000 CSOs to occur every year that discharge 850 billion gallons of diluted and untreated sewage into our waterways.  CSOs polluted the water with not only pollutants typical of sewage - pathogens and nutrients - but also anything else that stormwater collects as it flows across the urban landscape, like heavy metals, pesticides, cleaning agents, trash and debris.  This cocktail of urban pollution puts human health at risk and can cause severe disruption and damage to coastal ecosystems.

While it likely took a significant rain event to overwhelm combined sewer systems when they were first designed and installed,  growth and development in recent decades, has changed the urban landscape enough that it can now take just a small rain event to cause overages to occur. For instance, CSOs can occur in Washington, DC after only 1/5th of an inch of rain.  In the highly urbanized environment of New York City, it only takes 1/20th of an inch of rain for sewage to overflow into the harbor. Climate change will only make this worse as more frequent and more severe coastal storms will occur, dumping high volumes of rain, causing flooding and combined sewer overflows.

What is the solution?

Because combined sewer systems are located in developed, urbanized areas the solutions for CSOs are complicated and costly. Generally, solutions need to take one of the following approaches:

Installation of new stormwater infrastructure and separating it from existing sewers is extremely expensive and disruptive to urban homes, businesses and streets.  In recent decades most cities where CSOs are causing local water pollution problems are chasing instead to build new storage (generally underground) to hold onto excess stormwater that enters the system during storms to avoid overages.  This also can be expensive.  Fortunately more and more communities are looking to green infrastructure solutions that can increase the capacity of their watershed to absorb rain and reduce polluted runoff.  Vegetated swales, rain gardens, permeable pavement, rain barrels and green roofs are all types of green infrastructure that have been successfully implemented in cities to reduce CSOs.  The benefits of green infrastructure go way beyond improving local water quality conditions though.  Green infrastructure can reduce the urban heat island effect, improve local air quality, reduce impacts of climate change through carbon sequestration of trees, plants and healthy soils, and overall improve the quality of life for urban residents and visitors.  Learn more about how a number of cities have successfully employed green infrastructure solutions to address CSOs in NRDC’s Rooftops to Rivers report.

Join Surfrider in our efforts to #StopSewagePollution.