Along with Tortola, Saint Martin, and Barbuda, Saint John was one of the Caribbean islands hit most severely by Hurricane Irma, the most powerful hurricane ever recorded in the Atlantic. Surfrider Foundation’s Staff Scientist, Katie Day, returns to her home to conduct water quality testing and help distribute water filtration systems. 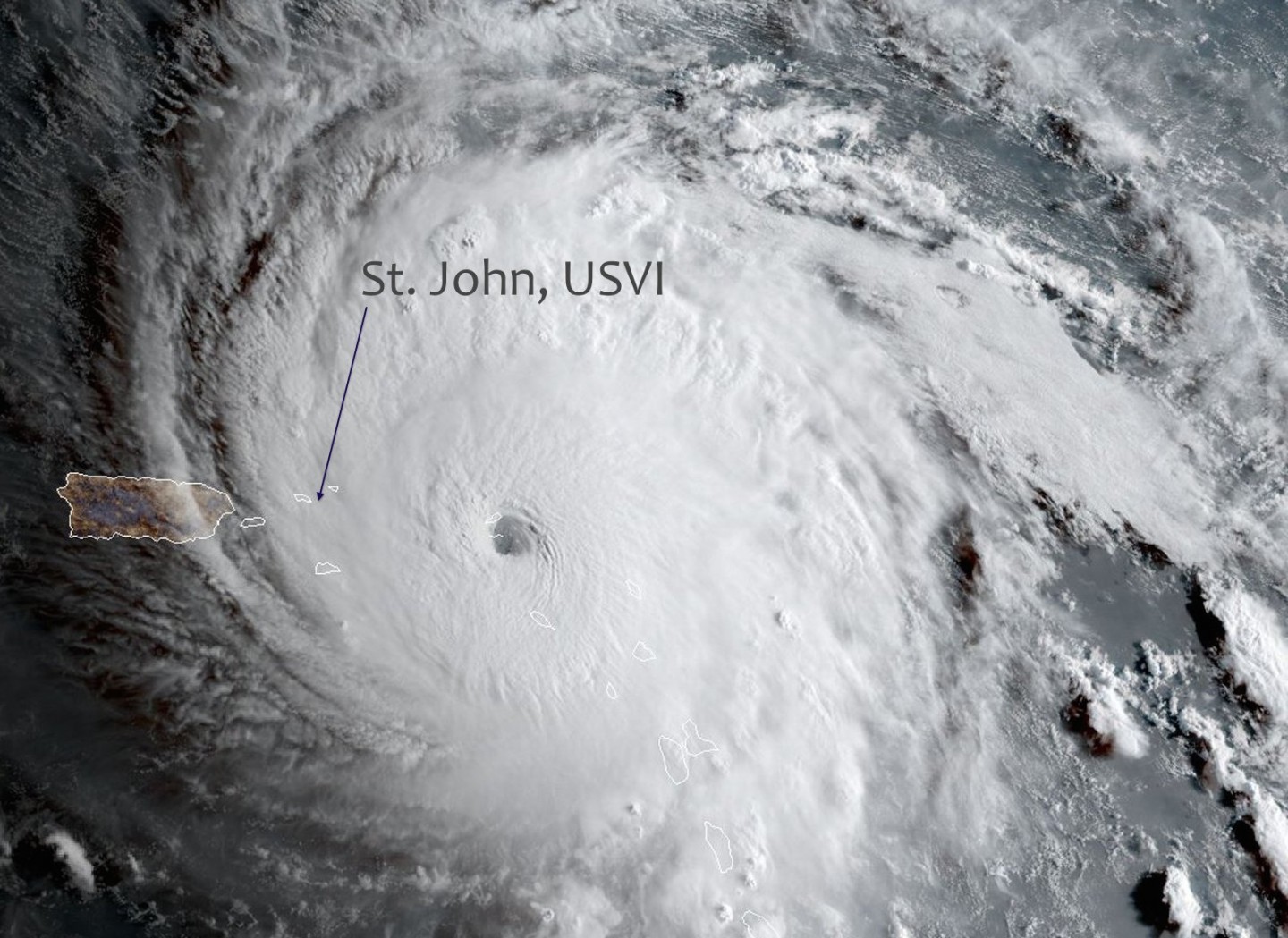 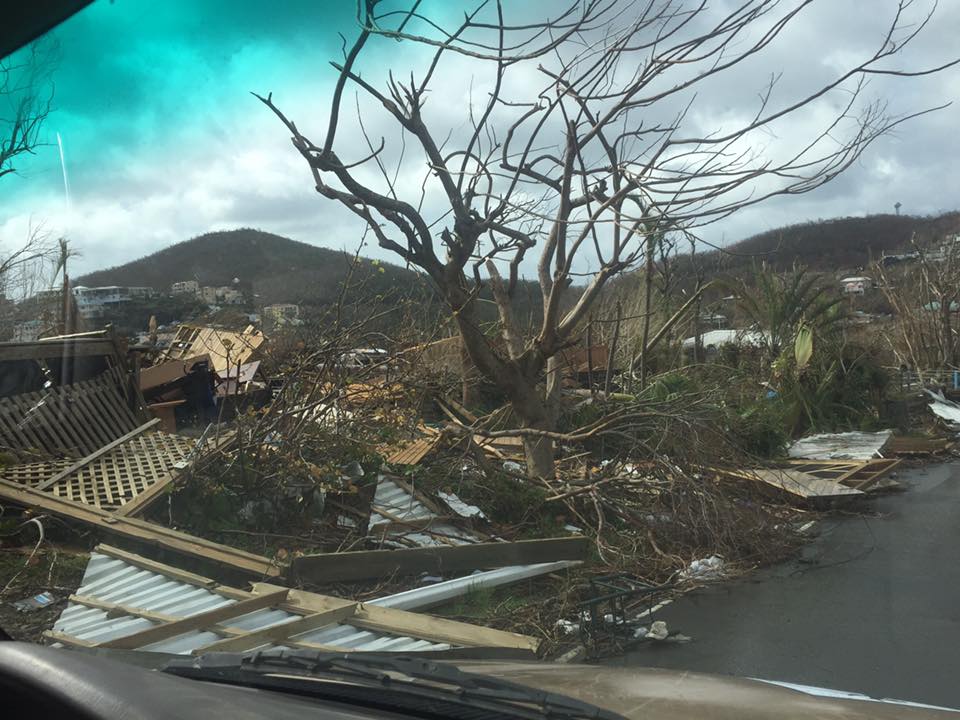 Debris from a home completey destroyed up near Centerline (photo by Mia Dixon).

The tiny Caribbean island of St John, in the United States Virgin Islands, is only three by seven miles long, home to about 5,000 residents year round, and happens to be my hometown. To aid in hurricane relief efforts, I went back to the islands last month to test recreational beach water quality, test drinking water potability, distribute potable water filtration systems, and of course - hug my parents. 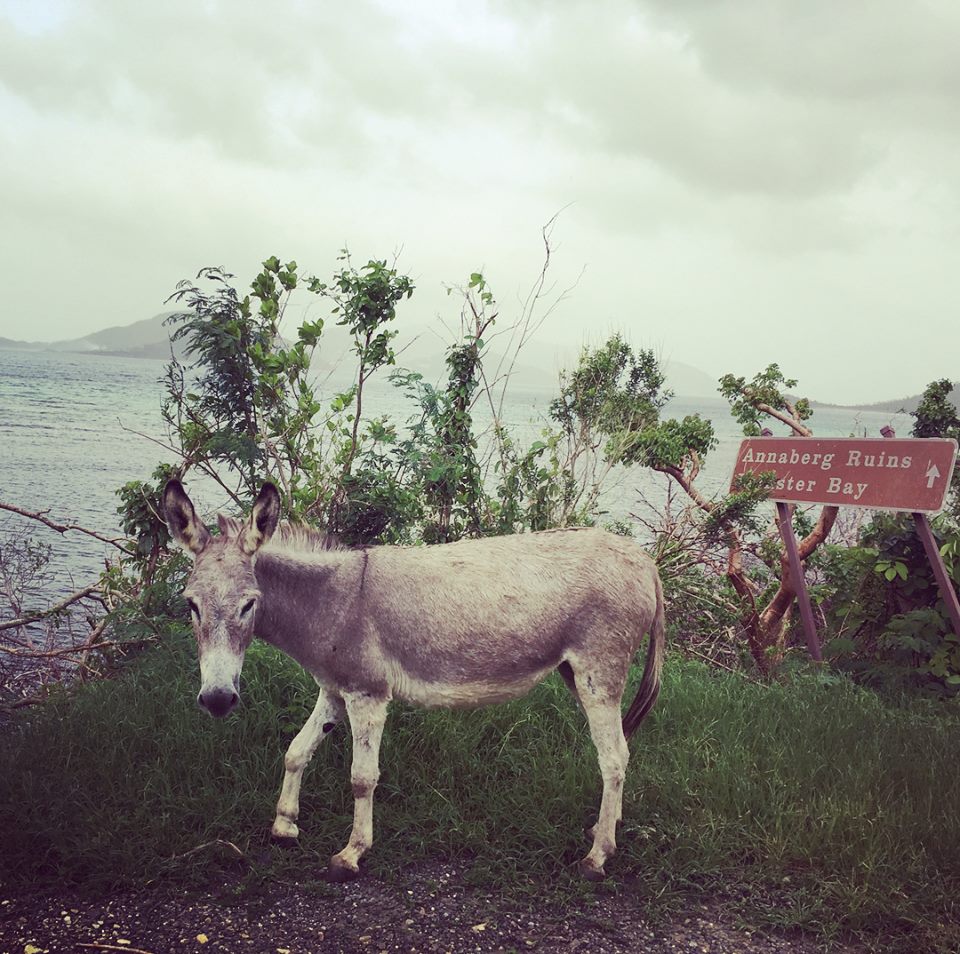 One of the island's beloved wild donkeys that survived the storm.

The territory is no stranger to hurricanes, as it is in the direct line of fire for Atlantic tropical storms. The residents have long learned to prepare for the annual hurricane season, peaking in September and October. Many restaurants close, tour boats are hauled out, and those who decide to take a trip off island board up their homes “just in case”. Current housing regulations also have requirements for constructing hurricane resistant buildings – but even with all this experience and precaution, nothing could prepare the island for the unprecedented combination of winds, tornadoes, and rain brought by Hurricane Irma on September 6, 2017.

Sustained winds of 185 miles per hour, with over 200 miles per hour gusts, were like nothing ever seen in the Atlantic Ocean, let alone the Caribbean Sea. Vegetation was stripped of its leaves, 200 year-old stone walls were flattened, and houses built to the highest level of code lost their roofs. Some houses built to previous codes lost everything. All that’s left of hundreds of buildings are the foundation pads, while debris from roofing materials, walls, furniture, and personal possessions are spewed across the island, some hundreds of yards away from where they originally stood. Other times, buildings were able to remain intact, but left the foundation pads behind as they slid down hillsides. 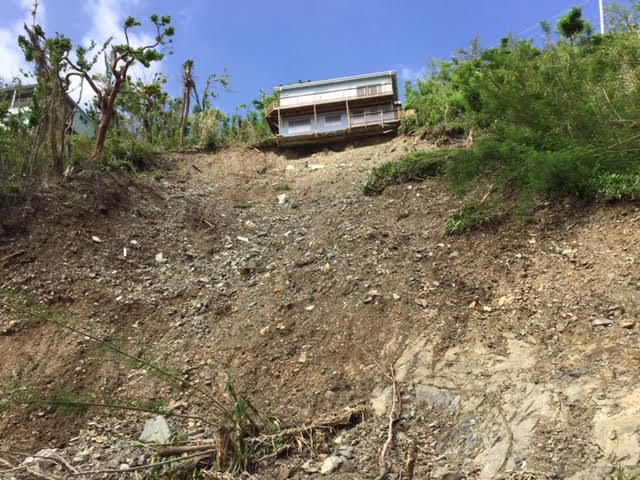 Landslide undercuts home teetering on the edge towards Coral Bay. 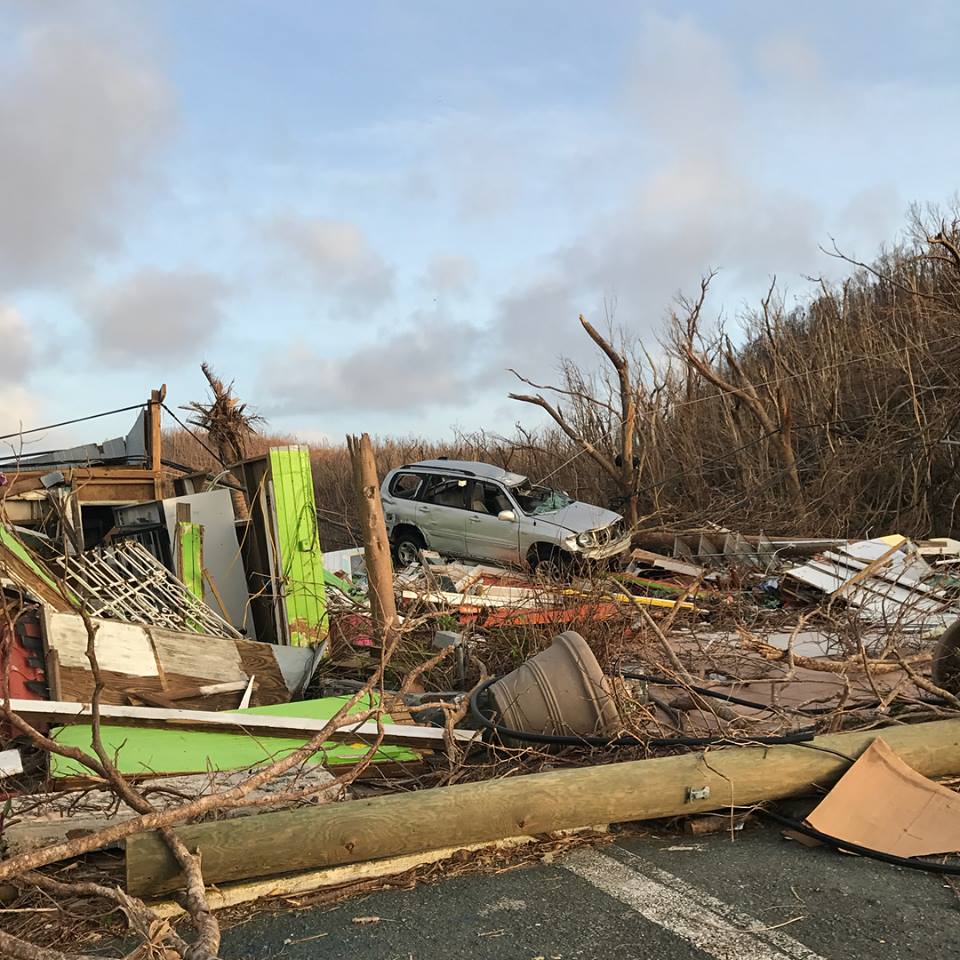 Damaged car atop the remains of telephone wires and the popular restaurant and tourist destination, Chateau Bordeaux (photo by Colin Hilliard).

After the initial downplaying of impacts by the American media, the degradation to the islands finally started to get some national attention and aid. But this attention was short lived. The impacts to the Virgin Islands seem to have been forgotten about by the general American public. Understandably, attention has shifted to the devastation in the much larger and more densely populated island of Puerto Rico, caused by Hurricane Maria, just two weeks after Hurricane Irma. Even our own president clarified the lack of understanding and attention for the region, referring to the U.S. territory’s Governor as the President of the Virgin Islands. 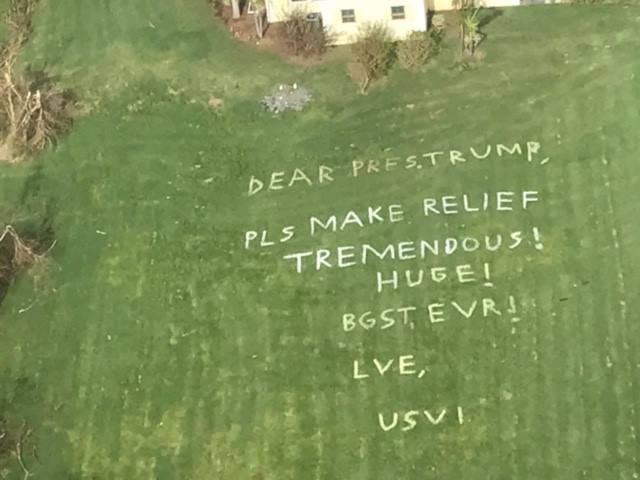 So what’s happening now? Nearly two months after the storm, over 90 percent of the island still does not have electricity. EPA tested and approved the city water for several restaurants and communities, but most residents are not linked to city water and are entirely unsure of how potable their cistern water is. To note, this isn’t stopping people from drinking their water, and frequently without boiling, as propane is expensive and at times hard to obtain. Private septic systems and city sewage treatment facilities are damaged. The use of hundreds of diesel and fuel generators is causing air pollution problems. The soil is overly saturated, which is contributing to severe flooding and landslides during recent rainstorms. Hundreds of boats are damaged, with dozens already sunk, and cranes to remove them are few and far between.

Dengue Fever season is starting, and if it was anything like last year, Zika virus could also become an issue. With many residents, especially elderly and children not in suitable housing, medical practitioners are fearful of what the next couple months of rainy season have in store. Just under half of the population has left the island since there are barely any housing options, minimal medical services, and few employment opportunities left. Progress - though happening - is slow. 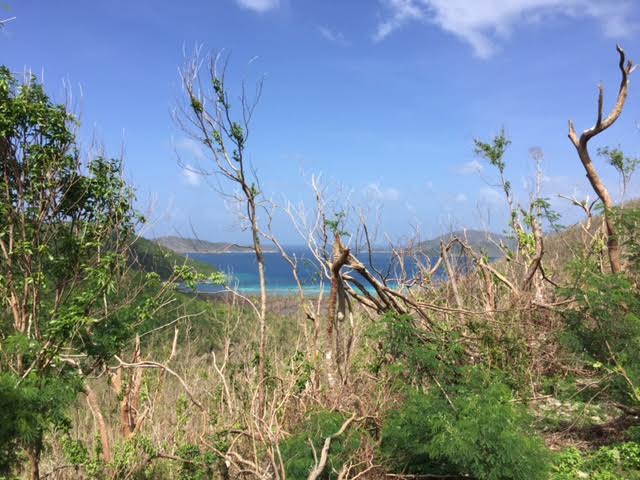 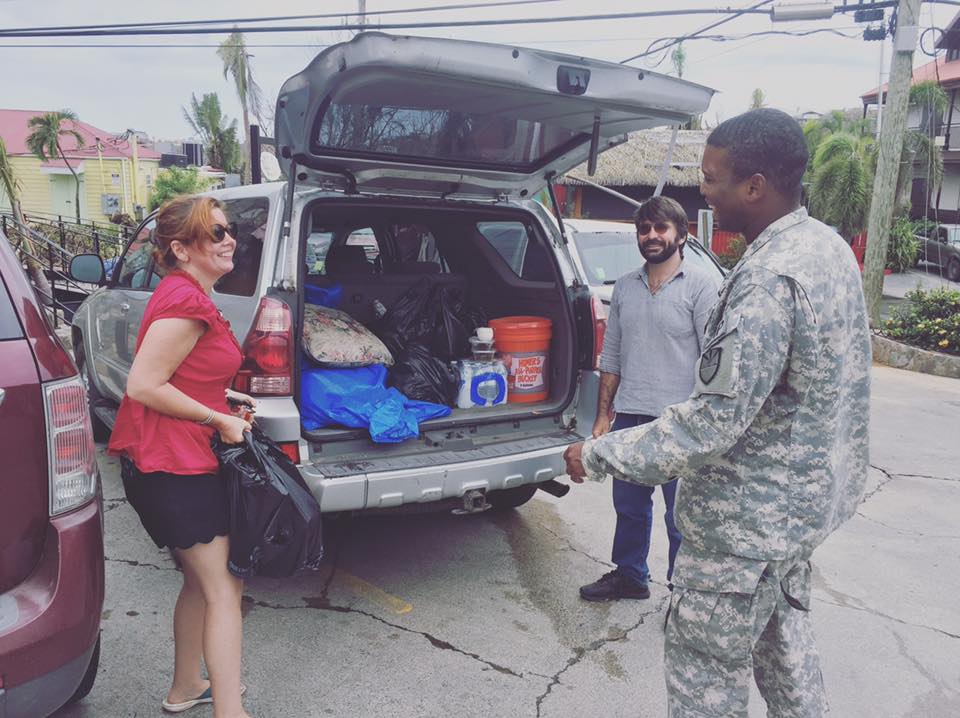 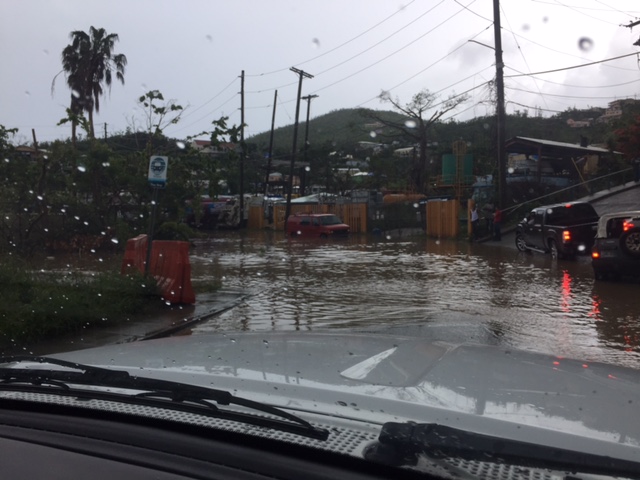 Severe flooding after a morning rainstorm.

Since the storm, aid and community organizations have been working vigorously at bringing in supplies, providing search and rescue, and setting up distribution centers (even though one of which is only open for three hours one day per week). We got word that hand sanitizer, mosquito nets, and D batteries were some of the continually biggest needs. Between friends and family we were able to bring over 400 hand sanitizers, couple dozen mosquito nets, two manual washing machines, about 20 D batteries, and more. We partnered with two of the local clinics, Red Hook and Cruz Bay Family Practice, to distribute sanitizer, and donated the rest to distribution centers. 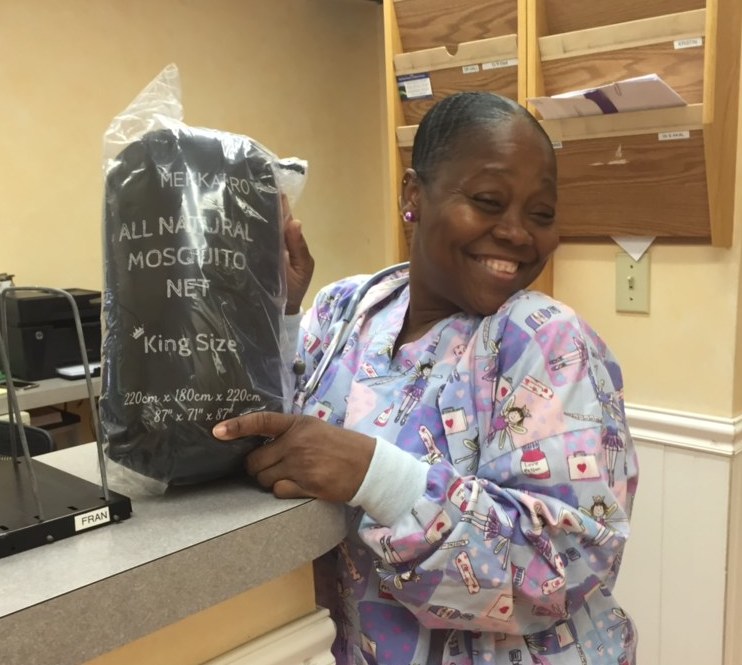 With so many other issues to focus on, the National Park Service had yet to start testing beach water quality. For fear of high bacteria levels off popular beaches, staff encouraged community members not to swim. Over a month after the storm, many residents were ignoring the Park’s recommendations and swimming in the water, potentially exposing themselves to harmful levels of fecal bacteria and pathogens. Though some areas have noticeable runoff, the water in many bays off of St John look as pristine as ever, with crystal clear turquoise water and empty white sand beaches. The temptation for a swim, with so much stress and destruction around the island, is pretty strong. 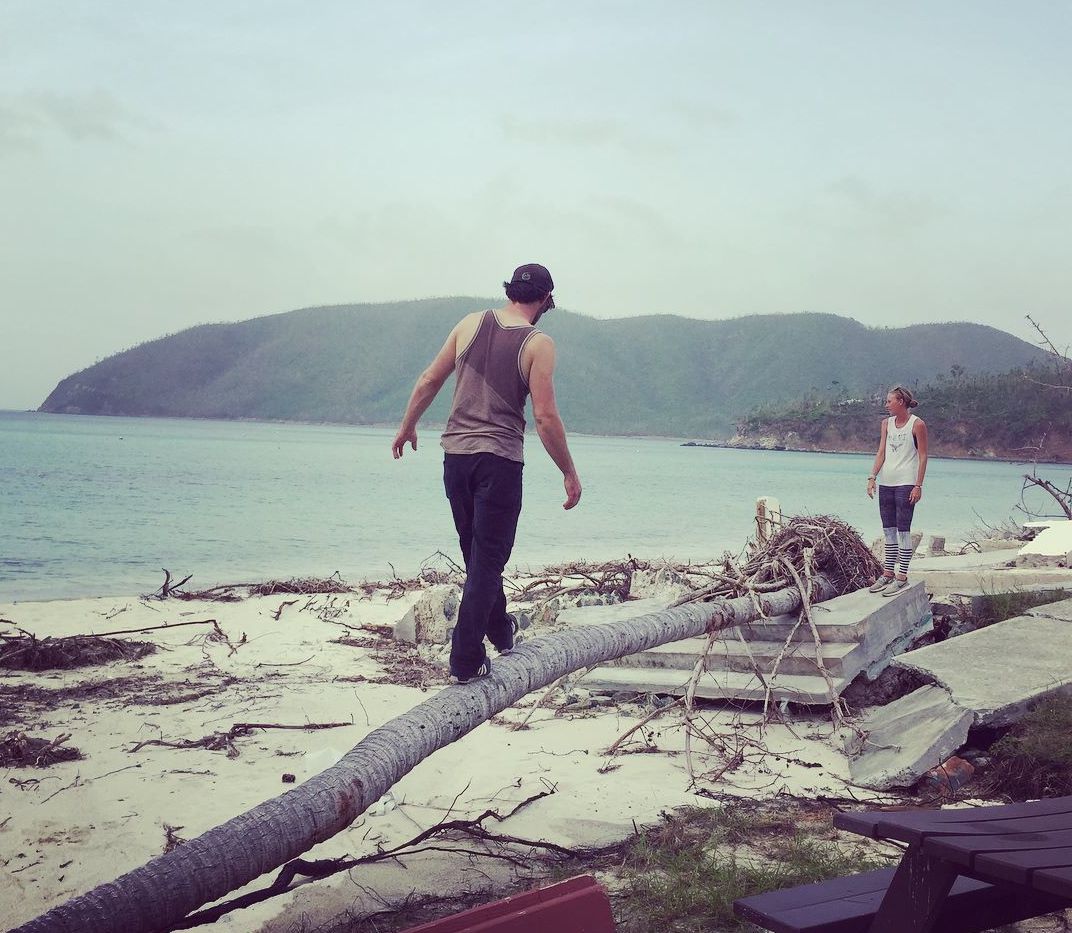 Damage to local vegetation and the recently installed walkway and pavilions at Maho Bay Beach. 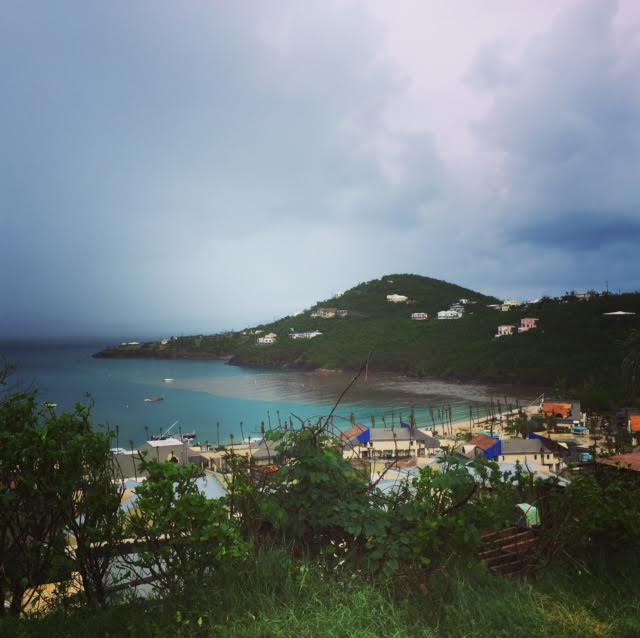 To help the agency get some baseline data on the actual level of bacteria in the water, and notify the community of which beaches really were dangerous, we partnered with St John resident, dedicated Surfrider volunteer, fellow ocean enthusiast, and long time friend, Sarah Swan, to test beaches and surf breaks around the island. 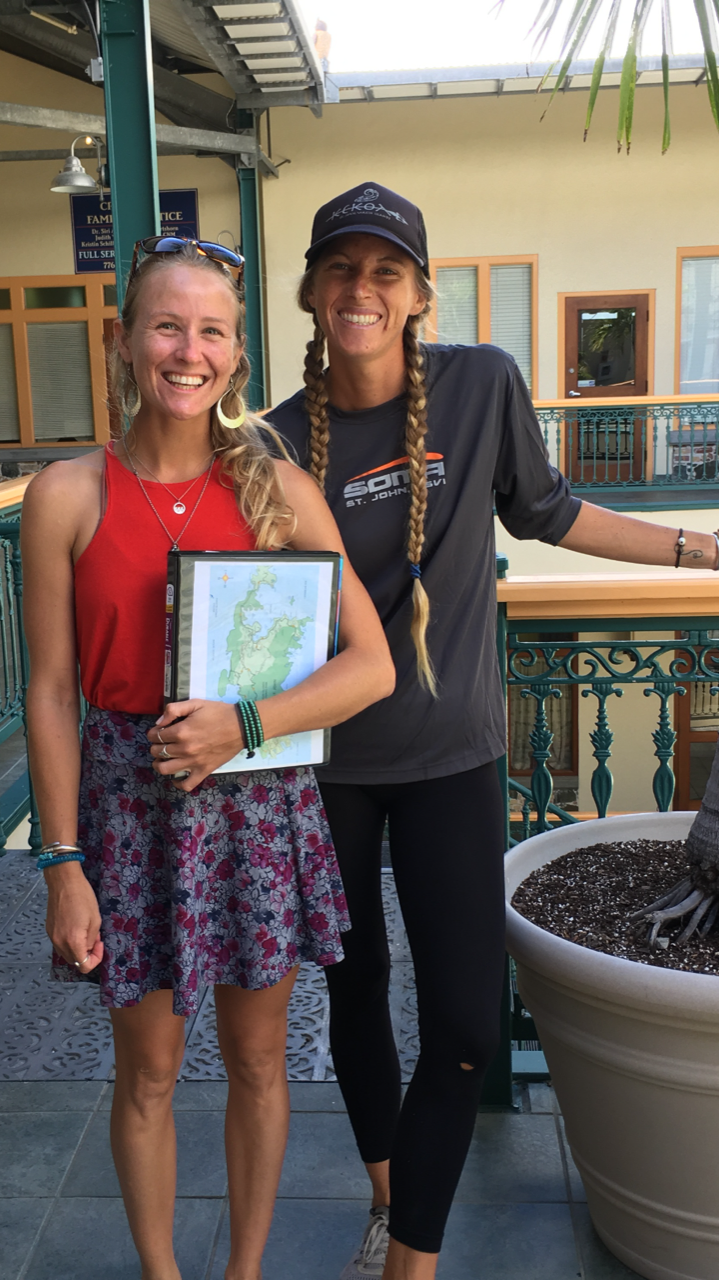 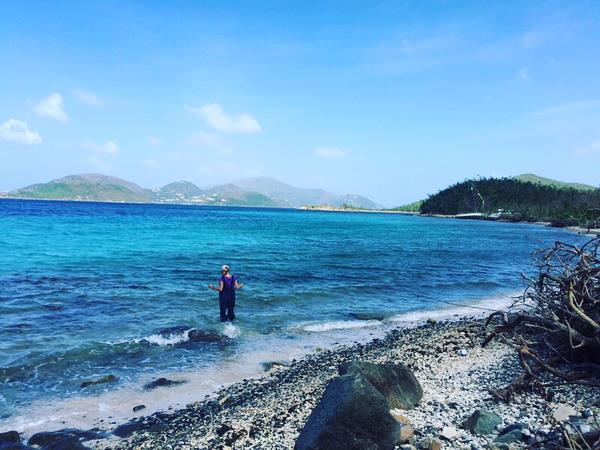 Sampling water at Annaberg with British Virgin Islands in the background (photo by Maggie Day). 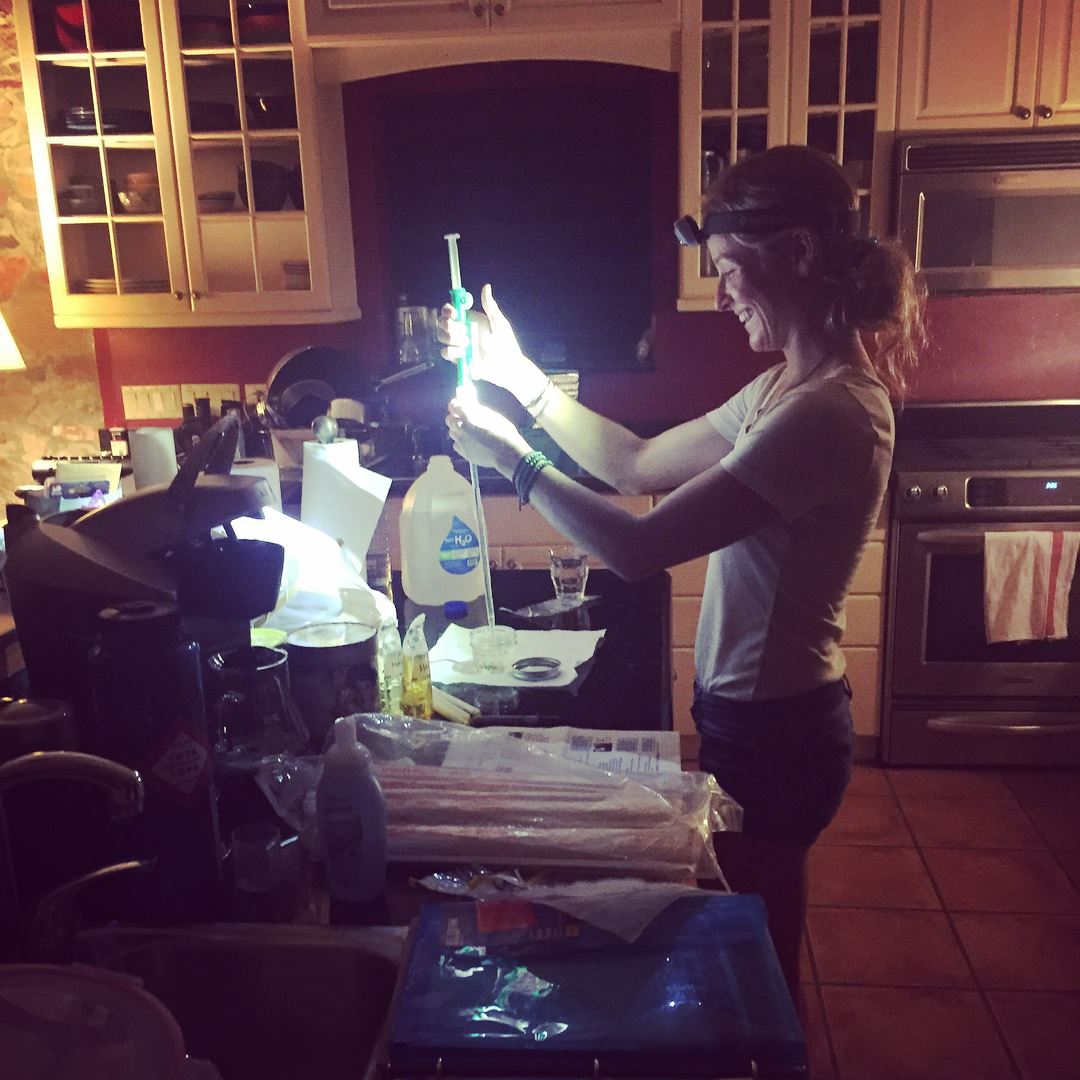 Surfrider Foundation and local community organization, Love City Strong, donated water quality testing kits, created by Aquagenx, which are able to test for fecal indicator bacteria without the need for a lab or electricity. We put together a sampling grid to test recreational beach water quality of 14 beaches around the island. Results were physically printed and posted at community centers, verbally mentioned at community meetings, broadcasted by local newspapers and interviews, and distributed to local agencies. Swan and Love City Strong will continue to test beaches throughout the end of the year, and post results on Surfrider’s Blue Water Task Force webpage. 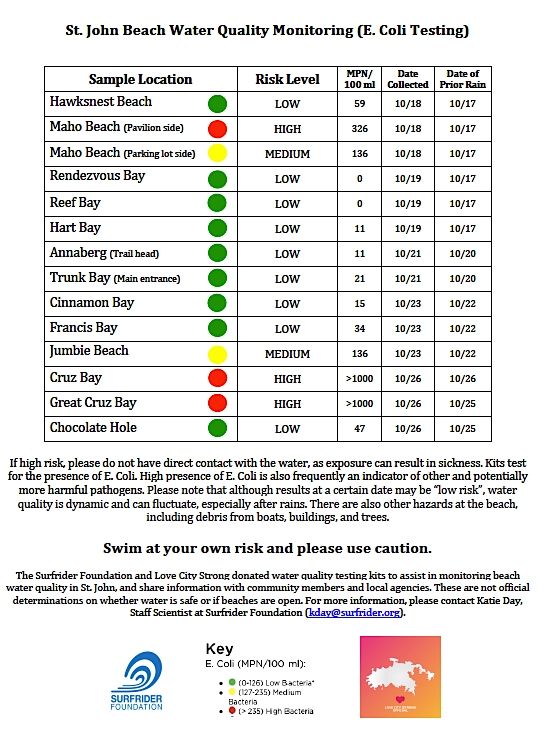 The Aquagenx water quality tests can also test drinking water, so we were able to test people’s cisterns for the presence of E. Coli. Multiple times samples from cisterns treated routinely still came back with medium to high-risk levels of the bacteria. Our results indicate that those with UV filtration systems were the least likely to have harmful bacteria in their water – but those systems can only run if they are hooked up to electricity or a generator.

For people with high-risk cistern water (and those unsure but unable to be sampled) we were able to provide water filtration systems donated by the nonprofit organization, Waves for Water. Each donated Sawyer water filtration system has a 0.1 micron filter able to provide over 1 million gallons of water 99.99% free of harmful bacteria and protozoa, including E. Coli, salmonella, cholera, leptospirosis, and giardia, among others. 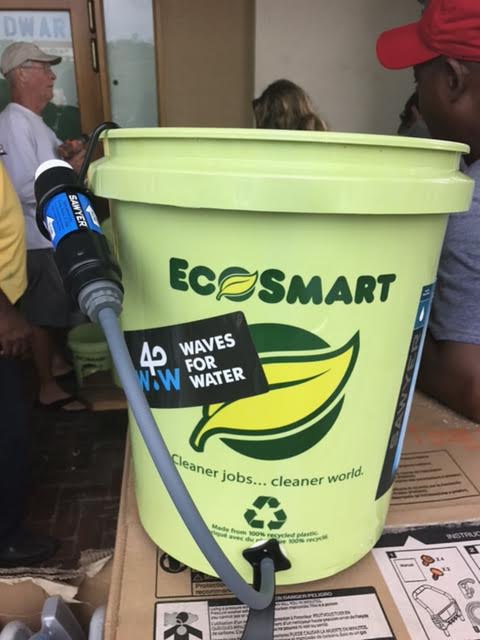 Though people will need to eventually clean their cisterns, these filters provide an interim way of ensuring access to clean water, without having to waste propane for boiling, or having to purchase and rely on imported bottled water. Avoiding bottled water also helps keep additional plastic pollution out of the already overwhelmed landfill. Swan will be receiving more Waves for Water filters shortly, and will continue to distribute to residents unsure of the safety of their drinking water. In the meantime, there are filters located strategically throughout the island to act as community refill stations.

Fortunately, this tiny island is home to a rather beautiful and tightknit community. Those that have remained on island are generally the people with deep roots and a long history on the island, meaning everyone pretty much knows everyone. People with homes still standing have opened the doors to their neighbors, and those fortunate enough to have large generators welcome friends to use their washing machines and enjoy a cold beer. On Sundays, if its not raining, a local favorite Soca band, Cool Sessions, plays a free concert in town, complete with makeshift bars and hours of dancing. Even without electricity, without running water, without Internet, and many without proper shelter, this vibrant Caribbean community finds time to smile and celebrate life. 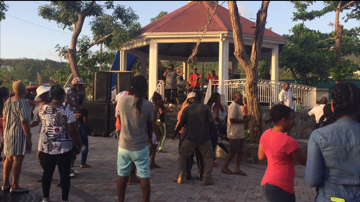 When it was time to leave island, American Airlines cancelled our flight - apparently as they have done to people every day since the airport opened after the hurricane. The airline didn't have another flight available for two weeks, as the continued cancellations created a backlog of people needing off the island. In a way it was a blessing, as we were able to coordinate with other agencies and aid groups, and really get the projects momentum up and running. When possible, the local clinic Cruz Bay Family Practice, equipped with a generator and Internet, generously offered the use of their resources so we could work remotely. 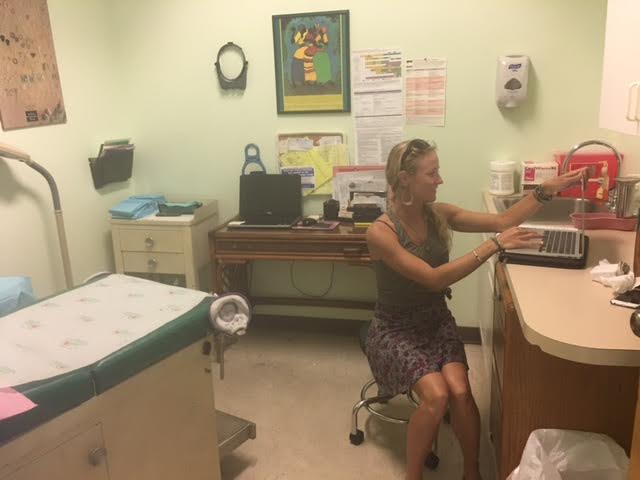 My temporary office equipped with a generator and wifi, generously offered by a local clinic so I could work remotely after our flight was cancelled (photo by Harrison Holland).

In the end, we got on a supply plane that’s been doing weekly evacuations since the storm. Roughly 1,200 evacuations have been coordinated by some incredible individuals at Love City Strong and Kenny Chesney’s relief foundation, Love for Love City. Our flight in particular included 16 shelter dogs and 8 shelter cats from the St. John Animal Care Center, a couple that rode out Hurricane Maria in their car after Irma destroyed their home, a very excited 5-year old girl and her mom from Tortola, who’s new boat company was destroyed after just months in operation, and a handful of others and their pets. 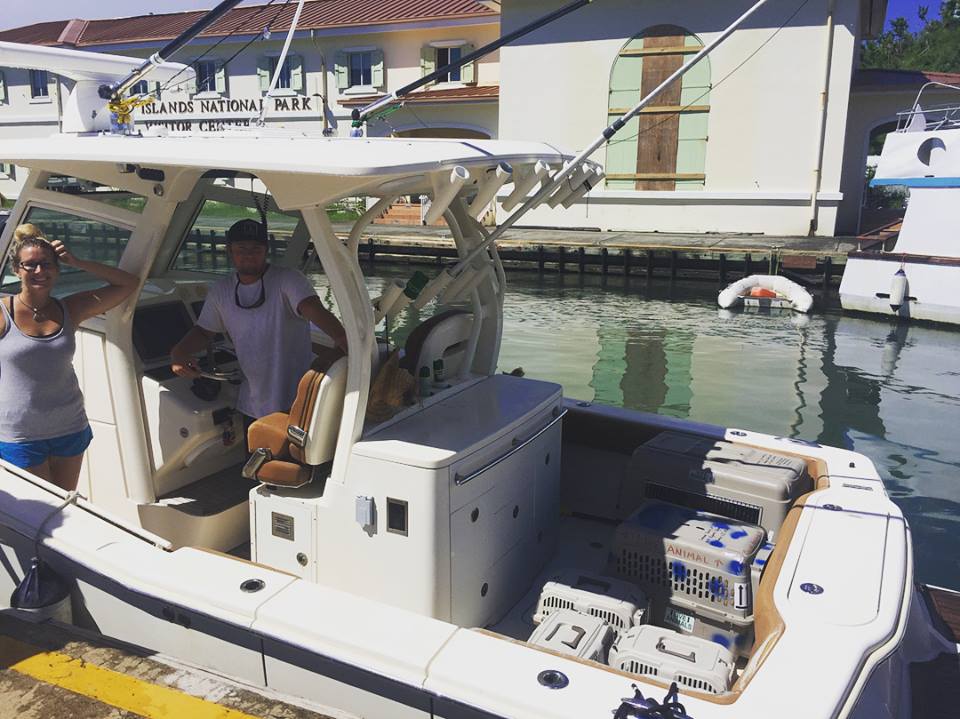 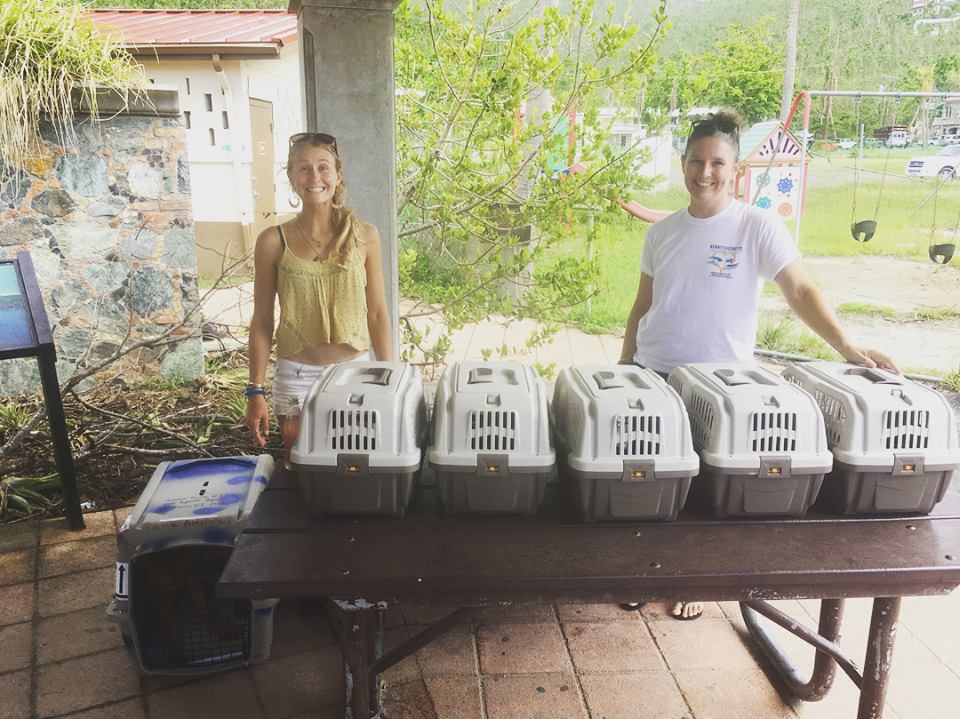 Love City Strong organizer Meaghan Enright and I with a cohort of cats and dogs from the local shelter, who are about to be transported to new homes and generous shelters in Jacksonville FL (photo by Harrison Holland). 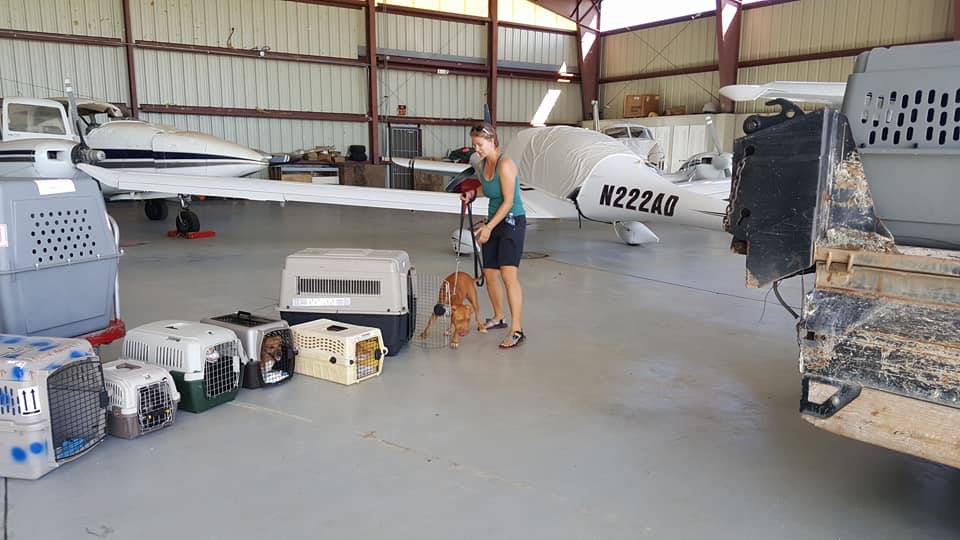 The road to recovery for this island, like many others, is long. Many are fearful of what this season’s hurricanes mean for the future of the island. Was this just a fluke, or a glimpse of what hurricane seasons will continue to be like? The impacts to this community are just another example of how continued greenhouse gas emissions, alterations to the chemical composition of our atmosphere, and the lingering threat of climate change seem to be coming to fruition – and their path is devastating. The varying levels of destruction also highlight the importance of and need for sufficient coastal management and policies that ensure coastal developments are able to stand up to increasingly severe and frequent storms. See Surfrider’s 2017 State of the Beach Report Card to learn about policies that are vital to protect beaches and coastal communities.

Although there has been a lot of progress, these islands still need your help. Please consider donating to nonprofits doing fantastic work throughout the Caribbean.