California State Lands Commissioners Gavin Newsom and Betty Yee both expressed their resolve to act in the public interest to address the Martin's Beach access issue. After taking public comment and then going into closed session, the three-person Commission reported back that they had decided to explore eminent domain as a way to force Silicon Valley billionaire Vinod Khosla to open the beach where he has restricted entry, and directed staff to report back with next steps on the process.

Although the Commission has the explicit statutory authority to exact eminent domain, if the Commission decides to proceed, it will be the first time in the agency’s 78-year history that it has used a condemnation proceeding.  For this reason and because they are going up against a litigious adversary, the Commission decided to only take the incremental step of devising a framework for eminent domain and directing staff to report back on specific steps in the process.

To kick off the public comment period at the hearing, former U.S. Congressman Pete McCloskey spoke in favor of the easement, as did State Senator Jerry Hill, who proposed Senate Bill 42 this week as a funding mechanism for acquisition effort.  Additionally, Rob “Birdlegs” Caughlan spoke powerfully about the limits of private property rights and the need for the public’s access at this historically-visited beach. There were about twenty speakers on the item in total, all of whom joined Surfrider in favor of Martin’s Beach access and the use of eminent domain, except two who spoke against: Khosla’s lawyer, Jeffrey Essner, and a neighboring coastal property owner named Ron Sturgeon, who is aligned with Khosla. On behalf of public access and the State Lands Commission’s use of eminent domain, Surfrider Foundation was joined at the hearing by a team of environmental groups including Sierra Club, NRDC, Environment California and Committee for Green Foothills. 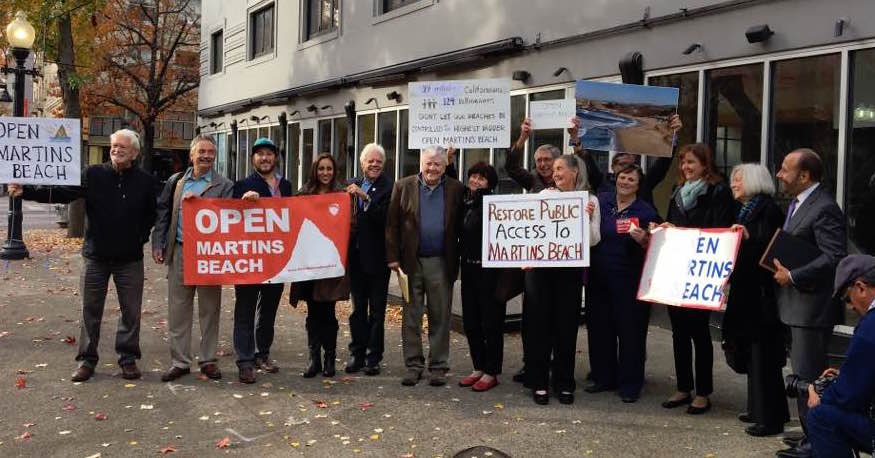 Surfrider Foundation was able to enter testimony from the local San Mateo County Chapter and legal and policy staff.  We reminded the State Lands Commission that the right to obtain access through eminent domain is a clear authority of the agency, which was put into place decades ago with Public Resources Code 6210.9, allowing the Commission to condemn a right of way or easement across privately owned land to provide access to public trust lands when no public access is available otherwise. This provision specifically reads reads:

“If the commission has public land, including school land, tide or submerged lands, and lands subject to the public trust for commerce, navigation, and fisheries, to which there is no access available, it may, in the name of the state, acquire by purchase, lease, gift, exchange, or, if all negotiations fail, by condemnation, a right-of-way or easement across privately owned land or other land that it deems necessary to provide access to such public land.” (emphasis added; Cal. Pub. Res. Code § 6210.9).

Upon the close of public comment, the Commission met in closed session to confer as to whether the Commission would move forward with eminent domain. After deliberating, the Commission reconvened the public session and shared the outcome and decision that had been reached to further investigate the process for condemnation.

The directive comes after nearly two years of Commission staff negotiations with Mr. Khosla and his representatives. Negotiations were spurred by Senate Bill 968, which was introduced by State Senator Jerry Hill in February 2014, and directed the State Lands Commission to negotiate a right of way or easement to facilitate public access to Martin’s Beach. It also authorized the Commission to acquire the land using other mechanisms, such as eminent domain, if access could not be concluded by the end of 2015. Commission staff reported that negotiations had reached an impasse and proposed that the Commission consider the potential use of eminent domain.  The Commission also reported out that their first appraisal for the accessway had come back at $360,000, a far cry from the $30 million that Khosla had asked for during negotiations.

Surfrider Foundation will continue to urge the State Lands Commission to use their authority to remedy the current injustice, to take a stand for beachgoers rights and send a reminder to all that the coast is still not for sale.